When we publish a new issue of the Indy, I like to slip away from our office in downtown Brooklyn and hand the paper out to rush-hour commuters at one of several nearby subway stations. It’s a chance to absorb the energy of the city and witness people’s reactions to the new cover.

“I just found this paper last month,” one middle-aged commuter told me recently at the Jay Street-Metrotech station. “It tells the truth.”

Yes, it does. And a lot more people are seeing it than ever before.

This is only possible because of the generous backing of readers like you. And we need your support more than ever as we continue to expand our reach and our coverage.

Since fall 2016, we have more than doubled our print circulation to over 40,000 copies per month. We have been placing Indy street boxes across the city. In the past month, we have set up new boxes in Bushwick, Park Slope, Long Island City, Stuy Town, Morningside Heights, Inwood — even Jersey City. We have a beautiful new website that is regularly updated with original content between issues. We are producing podcasts and news videos and hosting more public events at our home at the Brooklyn Commons.

The Indy’s growth comes as much of the established media is collapsing and extreme right-wing oligarchs are swooping in to pick up the pieces. The Koch Brothers are acquiring Time, Fortune, People and Sports Illustrated for roughly the price of one of their refineries. Sinclair Broadcasting is buying up dozens more television stations so they can put more pro-Trump propaganda on local news. Rupert Murdoch has said he wants to buy CNN. Worse yet, Trump and his FCC are poised to destroy a free and open internet by repealing net neutrality laws. Closer to home, the Village Voice print edition is gone; so too are Gothamist and DNAinfo, because their billionaire owner was offended that his employees had voted to join a union. 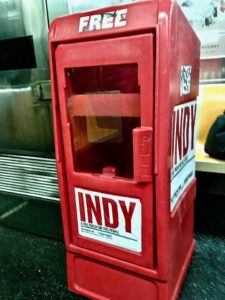 The Indy rides the subway out to a new location in Long Island City. Credit: Jesse Rubin.

It’s easy to feel overwhelmed at a time like this, but the antidote to despair is acting on one’s most deeply held beliefs. That’s why we’re continuing to step up. We’re not just printing more copies; we’re filling them with great content.

From the Women’s March to the anti-deportation movement to our coverage of the ongoing and historic #DisruptJ20 trial, we have been covering the radical, cutting edge of the anti-Trump resistance. Here in New York, we’ve provided in-depth coverage and analysis of the city’s trouble-plagued subway system, reported on the struggles of tenant and police brutality activists, chronicled the intrepid local organizing of the Democratic Socialists of America and found signs of life in the labor movement in the furthest corners of Staten Island.

We’re kept a blistering pace throughout this year and want to do more in 2018. But we can only sustain this growth with the backing of more readers like yourself.

So if you believe a free and fiercely independent media is more important than ever and want to support our work, please stand with us today, Giving Tuesday, and give generously. Every $50 you give allows us to print another 500 papers, every $100 another 1,000 papers. If you give $250, we can purchase and install another Indy street box and with your name inscribed on it.

You can make a one-time donation or sign up to become a monthly sustainer. Whatever you can give makes all the difference. On behalf of everyone who works on The Indy, thank you for your support.