The Indypendent
Menu
A Free Paper for Free People
Illustrated by Naomi Ushiyama.

The memories are still crystal clear, four decades later. I remember the shirt I wore, the time of day, the look on his face. He reached out and pressed his finger on my breast. Like most young women of that era, I went without a bra, not much needing it anyway. I was 21, and he was 42, married with kids, and my boss, and he was pressing on my nipple in the middle of our workspace.

My face apparently turned bright red, because he began to make fun of me for not being as much of a hippie as he had supposed. In truth, I was mortified by his presumption, and doubly dismayed because I’d looked up to him. We were a two-person operation, running a mass spectrometry lab for a nuclear-research institute. He ran the lab and I was his student assistant for four years, the only female in a four-story building. After that morning, I started missing work. I was eventually replaced. With a guy.

This tiny story is a drop in the ocean of what can be heard every day now. We are living in a moment of unprecedented global social revolution. Victims have forced the issue into the public domain, achieving an unparalleled visibility.  From Argentina to Mexico, from the United States to France, from India to Indonesia, their voices are growing in strength and taking courage from each other’s success. Their words have brought down powerful men and put revered institutions — religious, military, media, government, entertainment — on the defensive.

Yet the most recent wave of resignations, firings, and otherwise precipitous departures of high-profile men — including some progressive and avowedly feminist men — has generated a moment of reflection: Has the movement gone too far? Maureen Dowd’s Dec. 9 column in the New York Times referred to figures such as Senator Al Franken as “road kill”— a term that conjures up images of innocents who got in the way of a speeding vehicle. Feminist theorists and activists have begun a vigorous online debate over the importance of due process and whether we should make “distinctions” between degrees of harm. Has the movement already reached the stage of “la terreur,” when the public executions after the French Revolution attracted cheering mobs? Will this produce, as it did in France, a conservative reaction?

Women are denied presumptive credibility. It is unclear whether the global epidemic of sexual violence is the effect of this, or its cause but it ensures that accusers will not be believed.

We need to be reflective about the implicitly biased assumptions that may be framing our judgment of a powerful women-led social movement. The British philosopher Jenny Saul has characterized “implicit bias” as operating unconsciously to affect perception and interpretation. Loads of empirical studies have demonstrated its effects on job applications, jury deliberations, electoral campaigns, as well as informal social interactions. Women’s rationality has been dismissed for so long and in so many cultures that the image of an unthinking mob of overemotional women may be quite ready in the recesses of our minds. This is how implicit bias works: with troubling ideas and images lurking just below our conscious values and commitments.

Aristotle deemed the tenor and pitch of women’s voices a sign of insincerity and depravity, and today female news anchors still go to voice coaches to learn how to lower their tone, trying to achieve a masculine depth. Socrates believed women’s attention to their dress was proof of their intention to dissemble. Immanuel Kant wrote that a woman who studies physics “might as well have a beard.” Georg Hegel likened the difference between men and women to that between animals and plants.

These ideas may seem extreme, but few educational curricula spend the time necessary to thoroughly debunk them. As a result, they remain implicit but powerful parts of our mental landscapes.

The result is what some today refer to as “epistemic injustice,” or, even, epistemicide, when a whole class of persons and sometimes cultures are denied presumptive credibility. The basic human capacity to know reliably and objectively, even to know one’s own mind, is routinely denied women. It is unclear whether the global epidemic of sexual violence is the effect of this, or its cause: It ensures that accusers will not be believed.

Thus, the moment we are in is all the more remarkable. Many of the high-profile charges are far from new: Harvey Weinstein’s criminal behavior was widely known, Bill Cosby had been formally accused years before and Louis C.K.’s behavior was the subject of comedy routines. What is new is that women are being believed by a wider set of people.

The public visibility of rape and sexual violence today is a complex phenomenon. There continues to be lurid sensationalism and a highly selective focus on certain sorts of victims, but there is also a new form of public declarations of victimization and resistance. Each new case reverberates with the echoes of others around the globe, and across powerful institutions, from the Catholic Church to the U.S. military to the BBC and Fox News, from Ivy League universities to the Hasidic communities in Brooklyn. Victims inside these institutions have taken courage and ideas from others facing similar closed-door, self-protecting organizations.

What we are witnessing is not simply the emergence of a hidden discourse that is now coming into the light of day. Rather, this is contesting the terms in which sexual violations can come into the larger public domain — who can speak, what they can say, who will be accorded credibility, how their speech will be circulated, and what its subsequent effects will be.

Victims are speaking out and gaining a public platform in some cases, but their speech is often packaged, interpreted, given a “spin,” and highly circumscribed. When victims speak out publicly, they put themselves at risk to be discredited, blamed, threatened and physically harmed. Those threats are also echoed globally, exacerbating women’s fatalism and giving rape cultures new ideas about how to stifle victims’ rebelliousness. Social media has proved to be a double-edged sword: a powerful way to mobilize a movement, but also a means to enact a virtual stoning of accusers.

So when we ask the question, “Has it gone too far?” we need to consider: “What is the ‘it’?” The power shift in which accusers are accorded credibility? The seriousness accorded to sexual harassment? 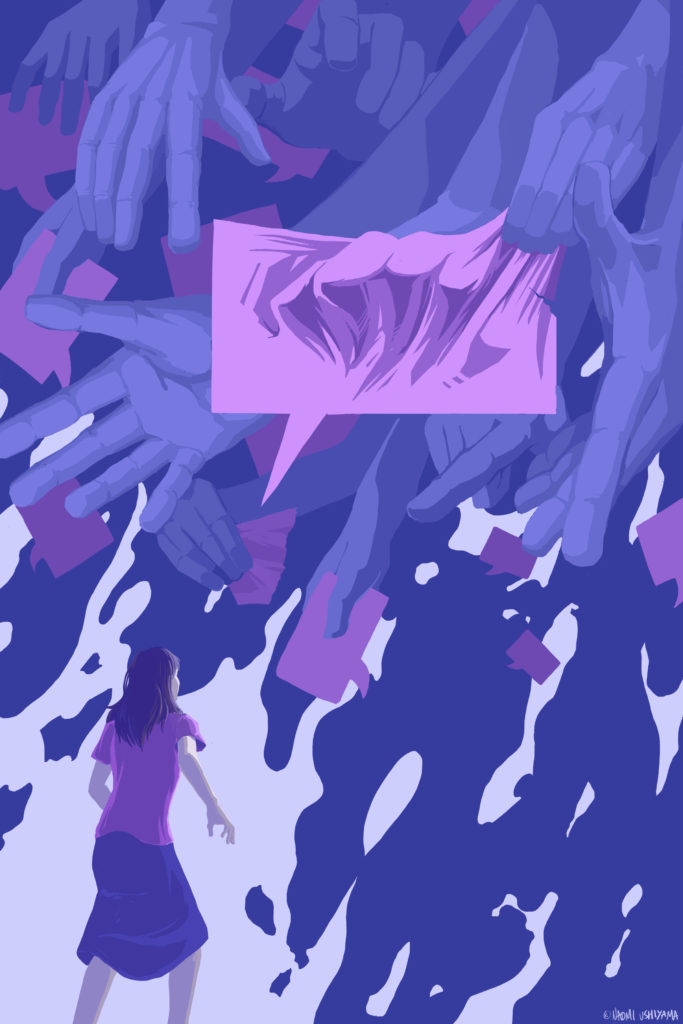 What the public has learned from these courageous victims in the past two months is pretty profound: That sexual harassment can escalate into assault and rape; that the scale of the problem is just as large as feminists have long claimed; that harassment is so institutionally protected and promulgated that it has a systematic effect on women’s employment. And that women are not going to back down.

However much power some accusers may seem to have today, we need to remember that survivors are rarely if ever in control of the ways in which our speech is edited, processed, packaged, publicized, globally transmitted, interpreted, understood or taken up as a cause for action, or of the kinds of action that ensue.  We are speaking, but the institutional contexts and domains of public communication that our speech is entering do not share our priorities. These domains mainly want to protect their brands, their consumer market-share and the institutions of our society. Like any smart aristocracy, they are trying to calculate how much change is necessary to keep the peasants at work.

We are seeing mostly celebrity stories because that’s what sells. Sexual violence is a dramatic story that garners attention, and as such, it has value as a political football. It is being used as one in competitions between political parties, media empires and corporations. It has long been used to legitimate war and a racist carceral system. This should not deter us from speaking out, but we need to think strategically. Our voices are too often used for agendas that have nothing whatsoever to do with finding the real causes of the problem or the real solutions.

Social movements based in social media are not strategic. This is both an advantage and a problem. The decentralized nature of social media can inspire more participation; unlike orchestrated demonstrations or reform movements with pre-set goals, there is a sense that anything might happen, and anyone can make a difference.

We need distinctions, and we need due process, but this revolution has erupted because the current theories and procedures and laws and rules are forms of management: managing the problem and managing the victims. The status quo is not acceptable.

The strategic questions are how to enlarge the movement to include workers and immigrants, the most vulnerable groups of victims. How to help the broader public see through media spin. And finally, how to outsmart those who would exploit our courage for their own purposes. We have our own agenda.

Linda Martín Alcoff is a professor of philosophy at the City University of New York, author of the forthcoming book Rape and Resistance (Polity Press) and a member of International Women’s Strike NYC. Her writings can be found at www.alcoff.com,