The Indypendent
Menu
A Free Paper for Free People
COUNTED OUT: Nobody knows for certain how many people are living in and around Prospect Park. What everyone agrees on is that the number is up. Credit: Elia Gran.

Early mornings, the scene at the LeFrak Center ice rink in Prospect Park is a model of comfort and tranquility. Skaters pirouette in time with Bach cantatas as ubiquitous landscapers tend to the surrounding greenery. On an unseasonably warm December morning, you could even mistake the men nearby, doing waking stretches and cooking over an open fire, for recreational campers.

In recent weeks, structures resembling large lean-tos mysteriously appeared within the park’s southeast entrance, only to vanish, torn down by the Parks Department, witnesses said. The structures haven’t gone unnoticed by many residents of the neighborhood abutting the park, the Prospect-Lefferts Gardens section of Flatbush. A neighborhood Facebook page was recently astir with calls for a crackdown amid quality of life complaints, including concerns about “soil erosion.”

How many people are living in and around Prospect Park is anybody’s guess. What everyone agrees on is that the number is up. When asked what was causing the increase in homelessness, one outreach worker who asked to have her name withheld told The Indypendent: “Evictions. The area is gentrifying so rapidly you’ve got people being pushed out, and going directly into the park. We’re seeing people through the entire park. We’re climbing fences to reach people, in the woods, everywhere.”

The changes in the neighborhood are not lost on Thomas Harris, aka Yeshua Ben Judah, popularly referred to as “Drum Man,” after the large battery of drums that surround him where he resides on the sidewalk beside the park. He blames the machinations of the Airbnb economy. “They’re renting that shit out on the internet,” he says, gesturing to the row of prewar apartment buildings across Ocean Avenue. “They’re renting that shit out for the weekend and make three times the rent.”

The dozen or so people staying in or around the park I spoke to for this article concurred on one point: none feel comfortable in a shelter.

Deborah O’Brien lived in an apartment on Ocean Avenue and took to the streets after the person she was staying with got evicted. “I see the signs, apartments for rent. … They’re just advertisements, there’s nothing there,” she says.

Patrick Bonck, communications director for Breaking Ground, the organization contracted by the city to respond to street homelessness in Brooklyn and Queens, ascribes the problem to the high cost of renting: “There are certainly many other factors, but the primary cause is the lack of affordable housing.”

Even though New York State has the right to shelter enshrined in its constitution, the dozen or so people staying in or around the park I spoke to for this article concurred on one point: none feel comfortable in a shelter. “The shelter is like jail,” said Nicky Dario. For Casey “Now What?” Larson, the shelter was a place where “I felt like I was in high school all the time.” She describes cliques that formed among other residents, condescending shelter workers, a general lack of dignity.

A white woman originally from Wilkes-Barre, Pennsylvania, Larson has a familiar story: She became homeless after a relationship turned abusive. “First I went and slept in Central Park,” she says. “Then I was in the shelter.” Larson, who has an associate’s degree and a history of retail work, signed up for the city’s housing waitlist through the shelter she was staying in but the process went nowhere. She has been sleeping in and outside of Prospect Park off and on since September.

“I was here when it was below freezing,” she says. “When I was sleeping near the bandshell, I woke up and my shoes were gone. I had to walk all the way to the other side of the park in flip flops. My feet hurt really bad.” Larson has also endured harassment from some of the men in the park, including pressure to do sex work for money. “That’s something I am not going to do. Sometimes at night, I’m scared to go to the bathroom. I like to have somebody walk with me. It’s especially hard as a woman out here.”

Meanwhile, the Breaking Ground outreach team logs endless miles circling the park, attempting to respond to complaints and concerns about this growing population. “If someone in Brooklyn sees someone on the street that needs assistance, they call 311,” Bonck says. “We’re obligated to respond within an hour.”

Thomas “Drum Man” Harris points to the view held by many that the street population is a nuisance, something to call the city to have removed. He relates comments he hears about his dwelling, an intricate jumble of djembes that would fit well in any number of art galleries. “A little kid says, ‘Mommy, that’s a bunch of garbage, right?’”

People have been staying in the park since probably as long as there has been a park. A Brooklyn Daily Eagle headline from 1908 decried “A Tramp’s Paradise is Prospect Park West.” Half a century later, the same paper told the story of a pregnant mother and three children, including a ten-month-old “clutching a panda doll,” pulled from the park.

In recent years, people utilizing park space in inventive ways have drawn ire and disdain. In 2012, the Brooklyn Paper criticized “vagrants” for living in hollowed-out dead trees and “destroying a delicate ecosystem.”

As this story was being written, the city’s Department of Housing and Urban Development (HUD) released its annual “Hope Count,” an estimate of the number of homeless. The count is considered to be low, since its methodology involves visual estimates of homeless people spotted on the streets on a given day. According to the Hope Count, the shelter population is up from 70,685 last year to 72,565. Two thirds of those in shelters are families. The street homeless population is estimated at just under 4,000, 39 percent above last year’s number. To get an idea of how much the homeless population has grown in recent years, consider a 2011 Coalition for the Homeless report announcing the homeless population had topped 41,000. 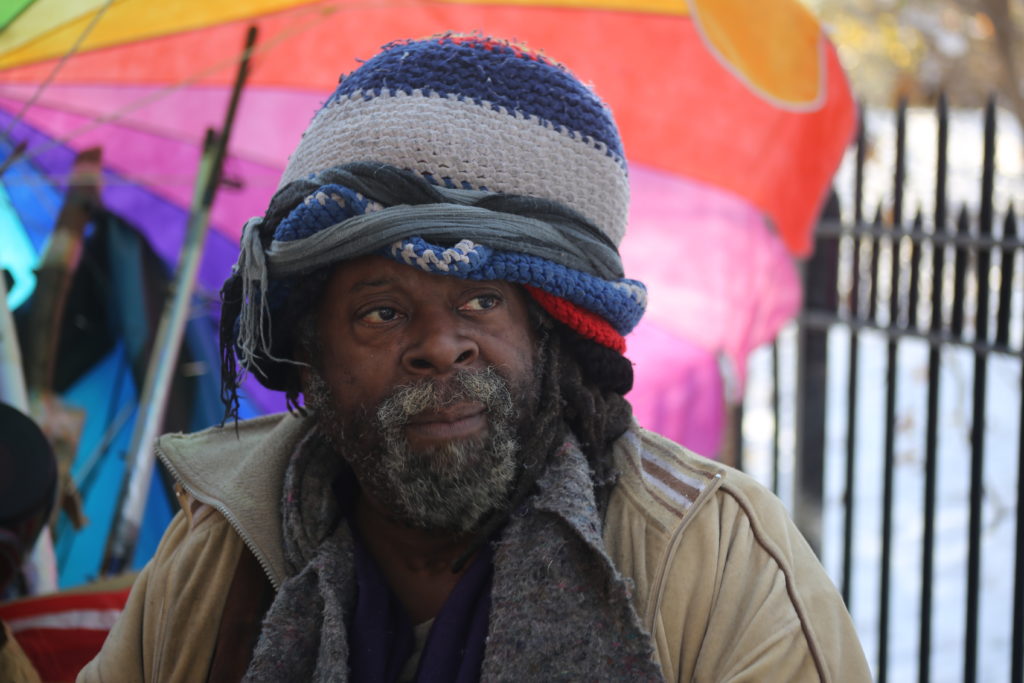 HARD TO BEAT: Thomas “Drum Man” Harris blames the machinations of the Airbnb economy for the uptick in homelessness in his neighborhood. Credit: Elia Gran.

Despite Mayor Bill de Blasio’s pronouncements of a “blood and guts war strategy” to reduce homelessness, the problem keeps getting worse. The mayor continues to push a housing policy that relies on tax breaks for developers to produce luxury housing, with a minority of affordable units. Many of the designated “affordable” units are still unaffordable to many New Yorkers because the designation is based on the Area Median Income, which factors in more affluent suburbs that surround the city.

The city’s Department of Homeless Services (DHS) budget has doubled under the de Blasio administration but it’s hard to see tangible results. A spokeswoman for DHS told The Indy that in the past year its outreach teams helped “865 homeless New Yorkers off the streets citywide,” including 13 people from the park and surrounding area, providing them “transitional or permanent housing opportunities” — a drop in the bucket given the scope of the homelessness crisis.

One homeless advocate told me, citing the department’s annual budget, “Every conversation between the media and the city agencies should start with where’s the $1.7 billion going?”

Many homeless advocates point to the city’s policy of paying landlords and hotels market-rate (and far greater) rents to house homeless families in “cluster sites.” Advocates point out that it is far cheaper to provide long-term housing. Charmel Lucas, a member of Picture the Homeless, is currently being housed by the city in a Manhattan hotel. According to Lucas’s documentation from DHS, the city is paying $7,716 a month to the hotel. “And you can’t even cook there,” she says.

“That’s a big step and a big change in strategy from what we’ve heard from this administration,” said Coalition for the Homeless Policy Director Giselle Routhier. “That’s one way you can get out of these poor models of shelter on one hand and increase the number of permanent affordable housing as well.” Over the next decade, says Routhier, the city “should be creating 10,000 new units of housing specifically for homeless households.”

Picture the Homeless has mapped much of the city’s vast stock of abandoned and vacant buildings. The group advocates tapping into this resource as a means of ending homelessness altogether. “There’s enough apartments out there,” says Lucas, pointing to the almost 2,000 abandoned buildings containing close to 12,000 apartments and 505 vacant lots Picture the Homeless has documented in Manhattan alone.

As proponents of the de Blasio plan tread with cautious optimism, the real estate industry has a different view of what it takes to survive in the city.

A recent analysis by the rental listing site “Renthop” found that the median rent for a two-bedroom apartment in Prospect-Lefferts Gardens was $2,450 a month. Tenants earning the neighborhood’s median household income of $42,462 would have to sacrifice nearly 70 percent of their pay to make rent each month. Citywide, the median household income is just over $50,000 a year, with 1.8 million households earning half that figure. Median rental prices, however, hover either at or above $3,000 a month in Brooklyn, Queens and Manhattan. Given those numbers, we can probably expect a steady increase in the number of homeless.

The situation a few blocks south of Prospect Park is indicative of the housing challenges facing much of the population.

Joy Noel, a grandmother in her eighties was recently evicted from 585 East 21st Street. Noel’s management company misspelled her name and sent her legal notices to the wrong address. The court subsequently ruled against her in absentia, and she is now reportedly staying on a friend’s couch. Other tenants at 585 East 21st tell how Carnegie Management shut off the building’s gas for months at a time in an effort to force rent-stabilized tenants out. Stories like these are part of what writer Michael Greenberg calls a “humanitarian crisis,” a situation spawned by a lack of tenant protections and the takeover of housing stock by private equity firms and other speculators.

Many black and West Indian residents in Prospect-Lefferts Gardens — and those staying on the streets are no exception — feel unwanted and unwelcome in the face of a larger demographic shift. “This is a war for survival,” Thomas Harris says. “White people are moving in, black people are moving out.”

Just a few blocks up Flatbush Avenue, in the thralls of rapid gentrification, the “Refugees Welcome Here” signs have been taken down. Storefronts bear signs advertising “space for lease” as longtime businesses face unrealistic rent increases or are unable to get lease renewals. Fancy bars and restaurants sprout up regularly. And a few blocks over at “Lefferts Manor,” the neighborhood record for a townhouse sale was recently broken, with a Victorian-era brownstone on Rutland Road closing for $2.627 million.

As the temperatures plummet, the Breaking Ground outreach van continues its endless circuit around Prospect Park and the homeless show no intention of leaving.

Photo (top): COUNTED OUT: Nobody knows for certain how many people are living in and around Prospect Park. What everyone agrees on is that the number is up. Credit: Elia Gran.