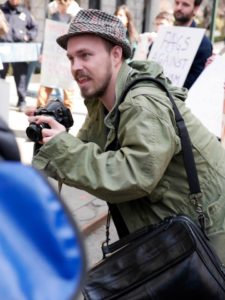 I first encountered The Indy nine years ago, when I moved back to New York after an extended stint out West. I had had my doubts about returning to the city, leaving my bucolic existence in the Rockies. There was a palpable fear then that New York was losing its edge. The Walt Disney Corporation was gaining an increasing foothold in Times Square and a giant, rust-hued spaceship named “Barclay’s Center” was about to land on Downtown Brooklyn. Was I looking for a city that no longer existed?

It’s our annual winter fund drive — your chance to support the local, national and international fact-based, upstart journalism you have come to count on!

Then a friend invited me to a fundraising party at a Bushwick loft for a local newspaper. The instant I walked in the door I knew I had made the right decision moving back. The hip-hop duo Rebel Diaz were at the microphone rapping revolution and in every corner of the loft, even up on its roof, heated political conversations were underway. Here was a hub of underground culture alive and thriving, a crowd who understood, in the words of Raoul Vaneigem, “what is subversive about love and what is positive in the refusal of constraints.” Indeed, their entire existences seemed dedicated to embodying and sharing and contesting amongst each other the finer complexities of this understanding.

The idea that neoliberalism is best of all possible worlds had been hammered into me and so many of my millennial generation so often I almost started to believe it. Now, as this logic imploded before our eyes in the midst of the financial crisis, we were told that if it wasn’t the best it was still the only possible world. In this little loft in Brooklyn there was no question that the system had swindled us and no doubt in our collective power of resistance. The debate was over how to most swiftly and thoroughly rectify things.

That night, I saw in the community surrounding The Indypendent a tiny flame burning at the tip of a match. As long as it is kept alive, I thought, it could be part of a fire that brightens the entire world. Political novices like me sometimes have these kinds of grand visions early on and if we are lucky, as I have been, we have a chance to put in the back-aching work of pushing them a little closer to fruition, inch-by-inch, year-by-year.

Only later when I began to work as an editor for The Indypendent did I begin to fully appreciate all that goes into it. Our writers, designers, illustrators, editors and our army of volunteers go above and beyond the call of duty with every issue. I have often asked myself why. I’m sure we all have our individual reasons but at the heart of those I sense there is a wild, shared fidelity with all the paper has come to represent — a pessimism toward the powerful and an unshakable hope in justice and equality.

Ask yourself: Where else in the country, in the world, does a newspaper like The Indy exist? The answer is nowhere.

We have grown massively over the years and can now be found on street corners across the city where it is snapped up by working people hungry for a newspaper that never hesitates to tell it like it is.

Of course, not everyone is happy about this. As one Facebook commentator recently put it after viewing an Indy promotional video:

The video shows enough that I know that this paper/website is an anti-America, cop-hating, Black-Lives-Matter- and Antifa-loving propagandist rag that would be better used as toilet paper than a credible source of news.

These are dark times but the flame of resistance The Indy keeps alive gets brighter every day. If that flame burns within you, my friends, please share it and give generously today — be it $25, $50, $100, $200, $500 or more — to keep this remarkable newspaper and community institution going strong in 2018. Trust me, we work magic with your donation. The dollars you give will be converted into news that makes real estate moguls and powerful politicians cringe and exposes new readers to nascent revolts simmering beneath society’s surface as we speak.