The Indypendent
Menu
A Free Paper for Free People
Demonstrators Rally at Grand Central Terminal in New York on Jan. 5, demanding the release of Ahed Tamimi and other Palestinian prisoners held by Israel. Credit: Jesse Rubin.

During rush hour Friday, more than 100 people gathered under the hallowed arches of Grand Central Terminal’s Main Concourse to protest the detention and likely conviction of 16-year-old Palestinian Ahed Tamimi.

The teenage girl was detained by Israeli Defense Forces (IDF) on Dec. 19 during a pre-dawn raid on her family’s home in the occupied West Bank village of Nabi Saleh.

Her crime: slapping an IDF soldier who was armed with an M-16 assault rifle. The incident was captured on video and has been viewed hundreds of thousands of times online.

Only moments prior to the soldiers’ arrival, Tamimi had learned that her cousin, 15-years-old Mohammed Tamimi, was in life-threatening condition after another soldier shot the boy at close-range with a rubber bullet. Half of Mohammed Tamimi’s skull is caved in and he will likely be disabled for the rest of his life. 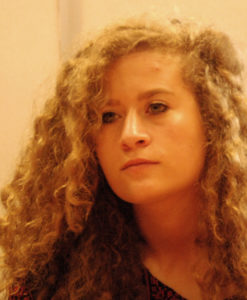 Ahed Tamimi was imprisoned without charge for 10 days. She was moved between multiple Israeli prisons, kept awake for long hours and transferred across the 1949 Armistice Line which separates Israel from the occupied West Bank, a direct violation of international law. Because Palestinians in the West Bank are under military occupation, arrestees are tried in military courts where the conviction rate is 99.7 percent.

When she finally appeared in front of a military judge, Tamimi was indicted on 12 different charges, most dating back years. For the recent incident, she has been charged with assault, disrupting the work of a soldier and incitement.

Less than a week after her indictment, an IDF soldier shot and killed a relative of Ahed Tamimi’s, 17-year-old Musaab Firas Tamimi, in the village of Deir Nitham, not far from Nabi Saleh.

After the seizure of Nabi Saleh’s land and freshwater spring by a settlement a decade ago, the Tamimi family began to garner a reputation within the West Bank for organizing weekly, nonviolent protests against the Israeli occupation. Now, the detainment of Ahed Tamimi has sparked worldwide coverage and condemnation.

Friday’s demonstration in New York was the second in the city in just over a week. The NYPD maintained a heavy presence throughout the Grand Central rally. Heavily armed sharpshooters were positioned at vantage points surrounding the demonstration in all directions.

Addressing protest attendees, Ariel Gold of CODEPINK, the women-led anti-war network that co-organized the rally, expressed the frustration that so many in the Palestine solidarity movement have felt the past few weeks.

“Ahed is a leader, Israel is the criminal,” Gold yelled through a megaphone to cheers from protesters, followed by chants of “Free, free Palestine” and “Free, free Ahed Tamimi.”

Gold has visited Nabi Saleh a number of times and is close friends with Tamimi’s mother Nariman and her father Bassem, leaders of Nabi Saleh’s weekly demonstrations. Asked how the two were handling their daughter’s imprisonment, Gold told The Indypendent “Nariman and Bassem are strong.”

Speaking on behalf of Black for Palestine, an African-American-led Palestinian solidarity campaign, Kristian Bailey drew parallels between the mass incarceration of black and Latino Americans and the indiscriminate incarceration of Palestinians under occupation. The United States and Israel each have two legal systems, Baily said; one for the rich and the powerful and another for everybody else.

“Raise your hand if you can point to a cop who’s in prison for killing a civilian here,” said Bailey. “Raise your hand if anybody has served prison time for genocide, for land theft, for slavery, for any of the imperial wars this country has committed around the world” Bailey howled through the megaphone but was met with silence.

Heated exchanges with counter-protesters from Jewish Defense League (JDL) broke out during the demonstration but no arrests were made. Active again after years of dormancy, JDL has become a small but reliably hostile presence at many Palestinian support rallies recently. “The group has orchestrated countless terrorist attacks in the U.S. and abroad, and has engaged in intense harassment of foreign diplomats, Muslims, Jewish scholars and community leaders, and officials,” researchers at the Southern Poverty Law Center note. The Federal Bureau of Investigation has described JDL as a “right-wing terrorist group.”

Despite a minority of counter-demonstrators, Friday’s rally received endorsements from a number of local groups, among them NYC Students for Justice in Palestine, Jews for Palestinian Right of Return, Jewish Voices for Peace’s New York City chapter and Al-Awda NY. The demonstration was live-streamed and, according to organizers, dozens of Palestinians under occupation watched the protest via social media.