In recent years the peace movement has often felt like a neglected stepchild, largely ignored by many left-liberal groups. It seems that ending war and militarism is just not on their agenda. When the Women’s March was organized at the time of Trump’s inauguration, opposition to war was not on their radar. Although it was added to the mission statement, it’s received little attention and is not among the eight Unity Principles on their website. And among many politicians otherwise deemed “progressive” we’ve seen no sense of urgency regarding ending the “endless war” or even for beating some swords into plowshares.

Of course it wasn’t always this way. During the later years of the Bush Administration the Iraq War became an albatross around the neck of the GOP. Many citizens were deeply opposed to the war, therefore a goodly number of Democratic politicians, including Barack Obama, made ending the U.S. role in Iraq a significant plank in their platforms.

But Obama’s opposition to the Iraq War did not represent a broader rejection of U.S. militarism and the military-industrial complex (MIC) that President Eisenhower warned the nation against back in 1961. Obama, in spite of his Nobel Peace Prize, dramatically escalated drone warfare; surged troops to Afghanistan; bombed seven predominantly Muslim nations; intervened in Libya, Syria, Somalia and numerous other countries, and initiated a trillion-dollar nuclear weapons modernization program.

The lack of meaningful progress on the peace front during Obama’s eight years in office is really no surprise. There has been a continuity of support for global hegemony throughout the entire post-WWII era. While there have been a outliers here and there, the mainstream of both major parties has supported massive military budgets and the dominant presence of the U.S. military on every continent, in every ocean, in the skies, in outer space and in the cyber realm. The military calls this “Full Spectrum Dominance.”

Many left-liberal groups ignore the Pentagon’s swollen budget even as it devours resources that could be put to much better use.

During the Cold War, the supposed threat of Communism was the justification for super-sized budgets and a continuous stream of wars and interventions—some overt, others covert or proxy—none of which had anything to do with defending the United States—and none of which ended in victory. These were sold to the American people as being fought to “defend freedom” or “support democracy.”

After the Cold War ended it became more difficult to justify such a massive military. Post-9/11 the supposed need to fight a “war on terror” became the rationale, although the supposed enemy was a ragtag non-state actor with no territory, no military assets and only a handful of fighters. What was never acknowledged was the reality that the growth in so-called “Islamist terror groups” was largely blowback — the result of and reaction to U.S. intervention in the region.

While the left was appalled by the positions Trump took on virtually all issues, his neo-isolationist campaign rhetoric led some to believe that perhaps he’d be less interventionist than Hillary Clinton. Unfortunately, the President is quite different from Trump on the stump. He has surrounded himself with generals and repeatedly threatened to blow North Korea off the face of the Earth.

Trump campaigned on the bogus claim that the U.S. military was “depleted,” and, in office, he has pushed massive increases in the Pentagon budget. Sadly, a bipartisan majority in Congress gave him all he asked for than then some. The administration had requested upping the military budget for fiscal year 2018 (FY18) to $668 billion, an increase of $57 billion from the FY17 appropriation of $611 billion. Congress ended up authorizing $700 billion, adding $32 billion to the Pentagon’s request. The Senate vote was 89 to eight, with most Democrats joining their GOP colleagues in showering extra billions on the military.

It is worth noting that, according to the Stockholm International Peace Research Institute, the FY17 appropriation exceeded the military spending of the next eight largest spenders combined, six of which are U.S. allies. And the increase means that in 2018 U.S. taxpayers will be footing the bill for a military that costs more than the next 11 top spenders combined. Note, too, the “military budget,” which devours more than half of all discretionary federal spending, does not include the CIA, Veterans Administration, military disabilities and many other expenses. 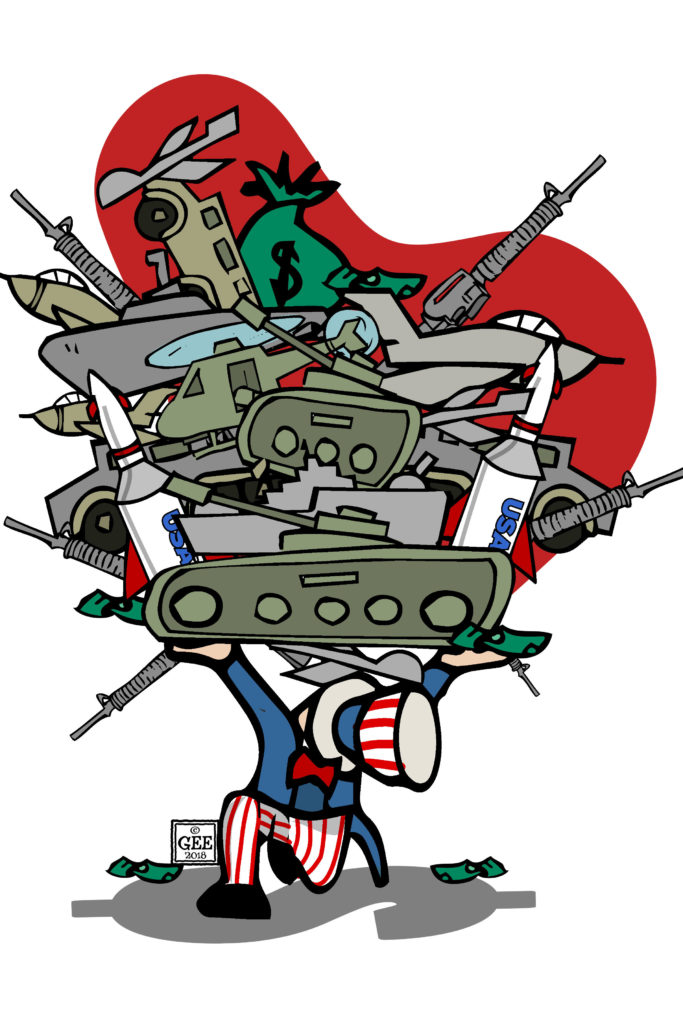 So, why is the MIC ascendant in the USA? Who benefits and how?

While a definitive answer is hard to pin down, a few possibilities, not mutually exclusive, include: A dominant military position goes hand in glove with the control of global financial institutions; it backs up control of resources, markets and labor in less developed countries by U.S. and transnational corporations. Geopolitical dominance assures the ability to intervene at will in conflicts, either directly, as in Libya, or by proxy, as in Yemen, or both, as in Syria.

A military that is involved in frequent conflicts is one that gets to test weapons in the field of battle. New technology provides a competitive edge both in combat and in the world arms trade. Selling military hardware is very profitable. This is one of just a handful of markets in which U.S. firms are still dominant.

Having an adversary that can be portrayed as a threat is helpful in efforts to rally the populace around the flag and the government, which is seen as a protector of the safety of the nation. As George Orwell put it, “War is peace.”

So, the complex feeds forward. The contractors benefit. They spend tens of millions each election cycle on candidates and have spent more than a billion this decade on lobbying. Their return on this “investment” is huge, profits in the tens and hundreds of billions. Congress gets the donations and it also brings home the pork, military bases and contracts in their states or districts. An example, the Lockheed Martin F-35 fighter is being produced by contractors in 46 of the 50 states. Even Bernie Sanders supports this program, as it provides jobs in Vermont. And the military, like any bureaucracy, thrives on an expanded role, more jobs, promotions, resources and a more central role in our culture.

Militarist cheerleaders love to point out that the MIC provides a significant number of jobs. There is some truth here, given the massive amount being spent. But consider that, beyond spending sufficient to provide reasonable defense, military expenditures provide no benefit; they don’t protect us or the environment; they fail utterly to improve our quality of life. Unlike infrastructure, they are not an investment in our future.

Speaking of education, consider that the $89 billion increase in military spending from FY17 to FY18 exceeds the $75 billion estimated incremental cost of making public colleges tuition free for all, as Bernie Sanders proposed. And of course there are so many other needs that we could be meeting if we reined in the Pentagon’s blank-check budget.

On the flip side, the GOP tax cuts for the wealthy are going to swell the deficit and provide a rationale for putting Medicare, Medicaid, Social Security and many other programs on the chopping block. Clearly, we’d do better to cut the military instead.

Why, you may ask, does the United States need a military with global reach? Other nations — China, Japan, Germany and others — seem to be doing quite well maintaining militaries sufficient to defend their countries from attack, but without establishing bases or maintaining fleets in every part of the world.

The simple answer is, “we don’t, but they — the MIC — do.” The citizenry would be far better off if our nation abandoned the role of global hegemon, led the world into multilateral disarmament negotiations and redirected billions into investments in our people and infrastructure. The trick is finding a way to mobilize millions of citizens to unite behind a broad progressive platform that includes making the move away from militarism and finding the points of political leverage to advance this agenda. Sadly, all much easier said than done.

Mark Haim is a longtime advocate for peace, justice, sustainability and climate action. He serves as director of Mid-Missouri Peaceworks, a grassroots activist group.