Less than 24 hours before he was scheduled to be deported by immigration and Customs Enforcement (ICE), immigrant rights leader Ravi Ragbir received a temporary stay this morning that will allow him to remain in the country.

The stay was granted by a federal court in the Southern District of New York as Ragbir and his supporters pursue a lawsuit asserting that he and other immigrant leaders have been targeted for deportation due to their 1st Amendment-protected political speech.

“Like so many people who are living in this country under the threat of deportation, I know how important it is to raise our voices against the injustices in the system,” Ragbir said. “This lawsuit is not just about me, it is about all of the members of our community who are speaking out in our struggle for immigrant rights.”

ICE’s recent attempts to detain and deport Ragbir come amid a string of ICE actions against immigrant rights activists, including the detention and deportation of a co-founder of the New Sanctuary Coalition, Jean Montrevil, to Haiti last month. These high profile actions prompted the law firm Arnold & Porter and the New York University Immigrant Rights Clinic to file suit today to challenge federal immigration officials’ retaliatory and discriminatory enforcement of immigration laws against Ragbir and other immigrant rights activists on the basis of their protected political speech. “ICE’s targeting of immigrant-rights activists based on their protected speech and political advocacy plainly violates the First Amendment,” said Sally Pei of Arnold & Porter. “We intend to put an end to this vindictive practice.” 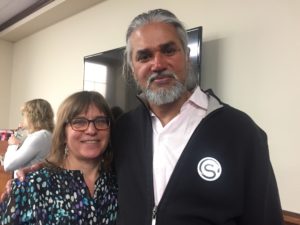 Ravi Ragbir and his wife Amy Gottlieb celebrate the news Friday morning that he had received a temporary stay of his deportation order.

“Justice was restored today, at least temporarily, as Mr. Ragbir is now able to remain in the United States and free until the court reviews his constitutional claims,” said R. Stanton Jones, also of Arnold & Porter. “If the First Amendment means anything, it means the government can’t silence immigrant rights activists like Mr. Ragbir by deporting them. We look forward to presenting these grave constitutional claims to the court.”