“They want to freeze us,” said a middle-aged woman from the Richmond Terrace projects in Staten Island who asked to be anonymous. “They don’t give us heat or hot water, and when the water does come through, it’s brown.” She’s also worried about public housing being privatized.

More than a score of police officers kept the protesters, who also included street vendors and electric-bicycle-delivery workers demanding an end to city harassment, corralled in three pens.

A contingent from the Flatbush Tenants Coalition mourned Joy Noel, an 85-year-old woman who died Jan. 31 after being evicted from her apartment at 585 East 21st St. last September. Landlord Isaac Jacobowitz had been trying to get her and other rent-stabilized tenants out for 10 years, says Jean Folkes, 76, who lives a few blocks away — and finally succeeded when she went away last summer and failed to show up for a court appearance. “Miss Noel,” Folkes says, had asked Brooklyn Housing Court before she left if there were any cases pending against her and had been told no — but the case against her listed her name as “Nole.” She came back to find a new tenant in her apartment, and “not even knowing where her belongings were.”

‘All the larger national issues — immigration, income inequality — are found in microcosm in this building.’

Her landlord “knew Brooklyn Housing Court wouldn’t stop him and weak rent laws would reward him with more $$$,” said a Flatbush Tenants Coalition flyer. It demanded that de Blasio “stand up to Governor Cuomo to strengthen the rent laws,” force city agencies to enforce the housing code, and “fight for real consequences for ALL predatory landlords.”

Jodie Leidecker, 45, said the owner of her building near Brooklyn College has been “trying to evict people without just cause,” particularly targeting Haitian immigrants who don’t speak much English. “All the larger national issues — immigration, income inequality — are found in microcosm in this building.” 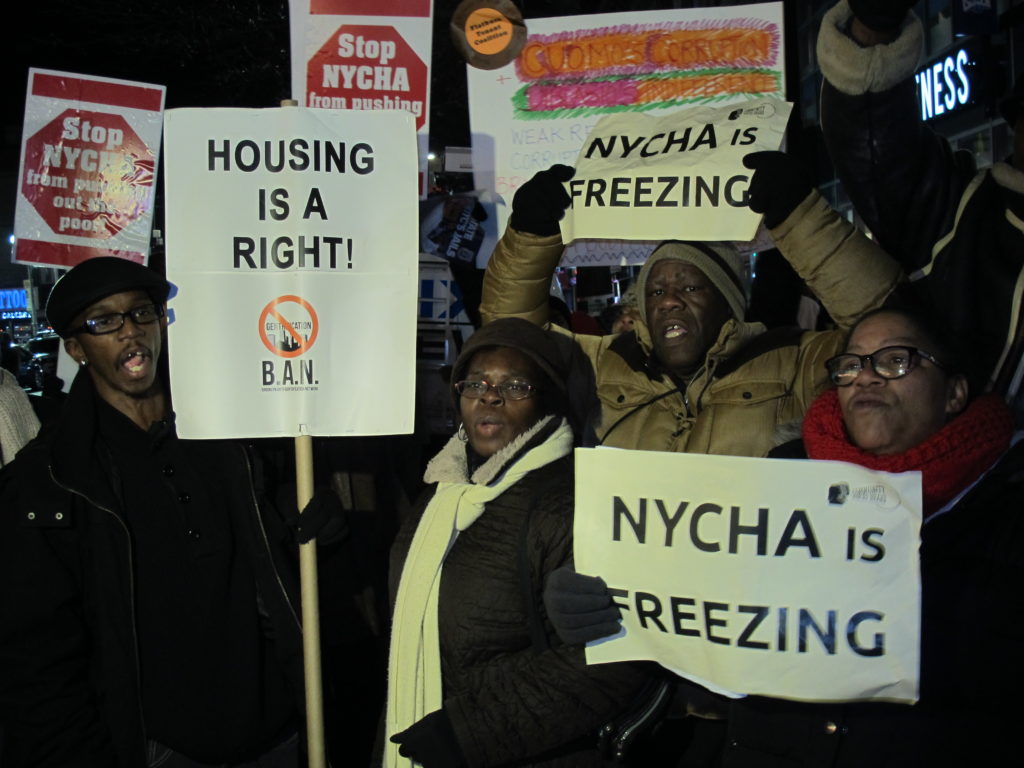 “I’m looking at the big picture,” said Folkes, who grew up in Kingston, Jamaica and has lived in the Flatbush-Ditmas Park area for more than 40 years. “We in the neighborhood are having a hard time staying. Every building that’s going up is a high-rise.” And the affordable housing being built is “not for people in the neighborhood.”

“Let the man know that it’s time for a change. People are suffering. Babies are freezing,” said Calvin Drumgo, president of the tenants association at the Bruekelen Houses in Canarsie, where he’s lived for almost 50 years. He says he gets “23-24 calls a day” from tenants with no heat or hot water. This is unacceptable. This is unreasonable. This is disrespectful. Enough is enough.”