At the beginning of January, Jean Montrevil was running a successful passenger van service in Queens and helping to raise three children with his ex-wife. These days Montrevil, 49, wakes up each morning in a childhood friend’s basement in Port-au-Prince, Haiti, wondering how he will survive in a country he barely remembers and whose language he’s struggling to relearn.

Back in New York, Jani Cauthen pushes ahead as best she can while working a day job and supporting her 19-year-old daughter, who she had through a prior relationship, as well as raising their two youngest children, ages 14 and 10.

Cauthen’s oldest daughter, Janiah Heard, recently began her fourth semester at Mercy College in Dobbs Ferry, New York. She worries it may be her last as her father is no longer available to help cover her college expenses. “I try to keep a positive mindset,” said Janiah. “But now my dad is no longer here with me. What do you do?”

Their youngest son, Jahsiah Montrevil, is a freshman at Brooklyn Tech High School who likes to play with his Rubik’s Cube. These days he’s trying to solve a more difficult problem — how to help his father return to the country he called home for 31 years. “A part of me is missing,” Jahsiah wrote in a campaign to help raise funds for Montrevil. “You never really know how to feel, but somehow you just feel it. … I know if he was here, he’d want me to keep going,” he said.

Jahsiah did exactly that and started a change.org petition on Jan. 3, the day Montrevil was detained. The petition calls for halting Montrevil’s deportation and has garnered over 12,000 signatures so far. “I am asking you to help as a son and an immigrant rights activist. If you were me and I was you, wouldn’t you want me to help?” Jahsiah wrote in the petition’s call to action. 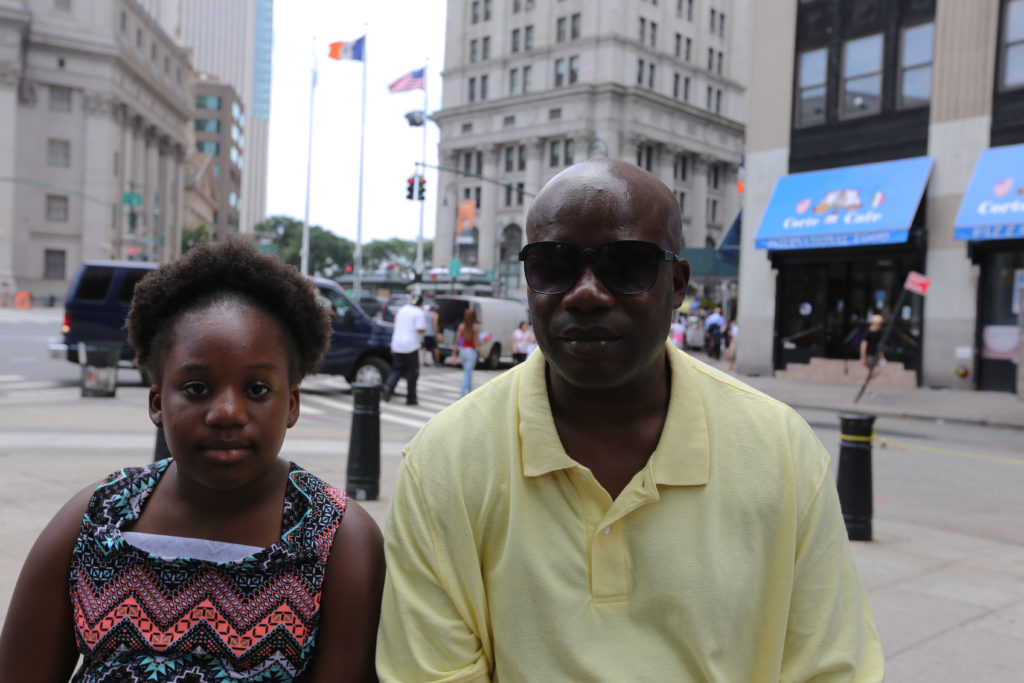 The Trump administration’s increasingly aggressive moves to deport longtime residents like Montrevil, who have no violent criminal history, has caused fear in immigrant communities across the nation. In Seattle, Immigration and Customs Enforcement (ICE) began deportation proceedings on Dec. 20 for Maru Mora Villalpando, a key organizer at the Northwest Detention Center Resistance in Tacoma.

In Detroit, Jorge Garcia, a 39-year-old landscaper with no criminal record, was deported to Mexico on Martin Luther King Jr. Day after 30 years in the United States. And in New York, Ravi Ragbir, executive director of the New Sanctuary Coalition, was detained on Jan. 11. He was held until Jan. 29, when a federal judge ordered his release after his supporters staged a series of protests.

The Haitian community is particularly vulnerable after the Trump administration’s decision to end Temporary Protected Status (TPS) for close to 60,000 Haitians last November. With mass deportations for Haitian TPS recipients slated to begin in July 2019, many more Haitians could suffer the same fate as Montrevil’s family.

Cauthen says Trump’s policies are separating families and contributing to dysfunctional households while failing to take into consideration the children of the immigrants they are deporting. “My kids don’t have a dad. My son’s going to graduate from high school in three years and there’s no guarantee that his dad’s going to be here.”

Despite protests that erupted outside an immigration detention center in Lower Manhattan after ICE took Montrevil into custody on Jan. 3, he was flown to the Krome Detention Center in Miami and deported 13 days later —  one of nearly 100 deportees on an ICE charter plane headed to Haiti and the Dominican Republic on Jan. 16.

Montrevil describes his detention and subsequent deportation as “a shock.” He was at home on his lunch break when ICE arrested him, even though he had a check-in scheduled for mid-January. “They didn’t have to come to my house,” Montrevil said. “I never missed a check-in in 15 years.” When Montrevil asked the ICE agents why they arrested him, one of the agents replied, “Don’t you see who we have as president now?”

Cauthen suspects ICE and the Bureau of Immigration Appeals (BIA) worked together to orchestrate the deportation, despite a pending appeal of the original deportation order that was issued by ICE in 1994 while Montrevil was serving an 11-year prison stint for possession of cocaine. The deportation order was based on a law that was passed after Montrevil’s conviction and therefore unconstitutional, Montrevil’s lawyer, Joshua Bardavid, has argued.

After serving out his sentence, Montrevil met Cauthen on a blind date and they started a family and a business together in Queens. But the deportation order continued to weigh heavily on Montrevil and he fell into a depression that affected their family life and ultimately led to the couple’s divorce. “I don’t regret anything. He’s a super dad. He puts his kids first,” Cauthen said.

Montrevil was first put in immigration detention in 2005. In 2007, he and Ragbir co-founded the New Sanctuary Coalition, an interfaith immigrant rights network in New York. Montrevil was nearly deported again in 2010. Cauthen suspects he continued to be targeted by ICE because of his activism.

When Montrevil was finally deported earlier this month, Cauthen said she wasn’t angry or sad but immediately got into “fight mode.”

“I’ve been dealing with it for so long,” she said. “So I developed a numbness to it.”

The experience of being in immigration detention was torture for Montrevil, who says he never wanted to be locked up again after spending more than a decade in prison. “For 17 years, I tried my best not to ever get in trouble again. I did everything [ICE] asked me to do.”

Deportees to Haiti are sent to jail upon arrival unless they are picked up by a family member who can prove Haitian citizenship and will take responsibility for housing the deportee. “I’m afraid of that process. And I know people who [have] already died,” Montrevil said on Democracy Now! last year.

Cauthen said she put together a network of people who could help pick up Montrevil. “In Haiti, you have to claim bodies like they’re luggage,” she said.

Montrevil arrived in Haiti without any possessions and said he had to wait for Jahsiah to mail him his phone, a portable charger, socks, underwear and clothing. “I opened up that package and was so happy, like a kid on Christmas.”

When Montrevil asked the ICE agents why they arrested him, one of them replied, “Don’t you see who we have as president now?”

Two weeks after his return to Haiti, Montrevil said adjusting to his new life might take longer than he expected. Haiti has changed significantly since he left for the United States in 1986. It was the poorest country in the Western Hemisphere then as now. However, the 2010 earthquake that killed 300,000 people forced many from the countryside into the cities, where the streets are crowded and intimidating, Montrevil said. “I left when I was 17 years old, I used to walk and was never afraid. Now it’s different.”

Montrevil is living in a different neighborhood now than where he grew up and is trying desperately to pick up the local Creole dialect so people won’t discover he’s a U.S. deportee. He says people stigmatize deportees for “blowing an opportunity” at a better life. “I don’t want to give people the idea that I’m from the States, that I’m a deportee, so I have to be careful.”

The only consistency Montrevil has in his new life in Haiti is his cup of coffee in the morning and a daily phone call with Jahsiah and Jamya his 10-year-old daughter. “I live my life for my kids. I love my kids and I never wanted to be separated from them. This is why I put up a big fight for many years,” Montrevil said.

Life in New York is difficult, says Cauthen, who is struggling to keep up with the finances and taking care of their kids in the aftermath of Montrevil’s deportation. “Everything is a mess.”

When Montrevil was abruptly detained, one of his Ford E-350 vans, which he used for his transportation business, was left abandoned. Cauthen tried to move the vehicle, but Montrevil had the keys on him and the van eventually got a boot on it. Montrevil’s four employees will have to find a new job and Cauthen is trying to wind down the van service on top of her regular day job and taking care of the kids. “It’s crazy — me trying to get things in order when he was the boss is hard.” 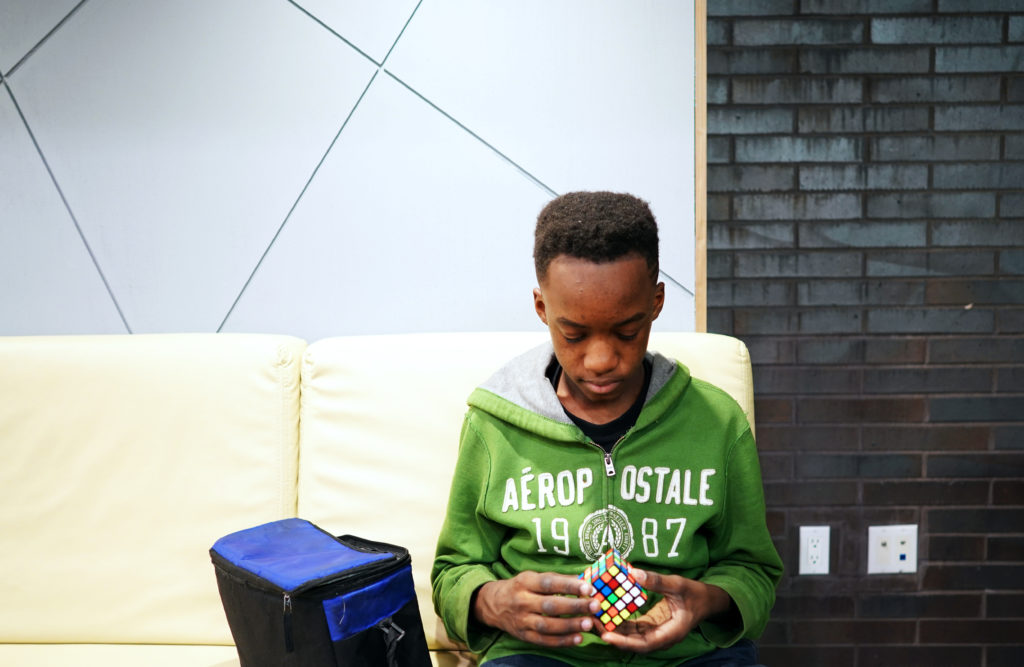 Jahsiah says life is different without his dad, who he describes as “fun.” “He picks me up after school on Fridays and after that we usually just go hang out, maybe at Chuck E. Cheese or Dave & Buster’s.”

Jahsiah is building a website about Montrevil’s case to raise awareness about the unfair treatment of immigrants. He thinks it’s especially unfair that his father is being deported for a crime he committed decades ago. “He did a crime when he was 19 years old. He should be able to go on and live his life as a regular human being.”

Janiah says she needs Montrevil in order to apply for financial aid and might have to take a semester off to save up money.

Montrevil is heartbroken that he can’t be there for his children anymore, he said. “I grew up without a father, I never want that to happen to my kids. This is a tough situation for all of us, but what can I do?”

He’ll continue to fight his case in court, but after years of struggle he’s lost faith in the U.S. immigration system. He regrets putting his life on hold for years in America, waiting for a resolution to his case. “I think that was a big mistake. I lost all those good years,” Montrevil said. “I’m just going to focus on what I can do here. If I get lucky, I’ll come back, but I have to make a life here now.” He is hoping Cauthen can send one of his vans to Haiti so he can start a transportation business there.

In the meantime, Cauthen will focus on her kids and supporting them as best as she can while they wait for a final outcome on Montrevil’s case. “I don’t want my kids to be one of those stories that ‘Oh, my dad was deported. That’s why I got arrested,’” she said.

Cauthen intends to keep fighting and hopes to go to law school someday so she can help change the immigration system in the United States. “[ICE] thought that by them deporting him that the Jean Montrevil story is going to die [and] it’s not. I’m going to advocate for him to the best of my ability because what they did is wrong.”