A new article faith has lately been added to Silicon Valley’s reigning doctrine, alongside the abomination of neckties and the eminence of Burning Man: the idea that everybody should receive a “universal basic income,” a substantial, regular stipend for being alive. Mark Zuckerberg and Elon Musk have championed it, and even Barack Obama, while a sitting president, suggested that such payouts may soon be necessary.

The cause for this, we’re told, is automation. Robots and artificial intelligence are advancing to such a degree that millions of jobs will soon disappear, never to return. The ancient link between employment and income will need to be severed. Yet the most remarkable thing about this onrush of interest is not that it is happening — serious, powerful people talking about unconditional cash for all! — but that we don’t have universal basic income already.

Smart people a long time ago assumed this kind of thing would soon become a given, long before now. The colonial-era philosopher-preacher Jonathan Edwards, for one, saw technology-enabled leisure on the 18th-century’s horizon. “There will be so many contrivances and inventions to facilitate and expedite their necessary secular business,” he imagined for the denizens of the near future, “that they will have more time for more noble exercise.” Economist John Maynard Keynes, even as the Great Depression set in, expected that due to “technological unemployment” his grandchildren’s generation would enjoy 15-hour workweeks.

We got the technological wonders they expected, and more — just not the time or the freedom from want it would depend on.

Technology delivers wonders, but not the freedom from what you would expect.

They also realized they could get their technological advances on the cheap. Beginning in the early ’70s, U.S. worker productivity continued to increase, but wages went flat. Private-sector unions began their nose-dive into a now-imminent extinction, so most wage-workers lacked the power to claim their share of the value they were creating. The obvious conversation about basic income stopped. Rather than becoming obsolete, jobs just stopped spreading the new wealth they generate. And as tech’s nouveaux riches realize their complicity, the basic-income talk has started up again. This time, as before, it sounds like a foregone conclusion.

“There is a pretty good chance we end up with a universal basic income, or something like that, due to automation,” Elon Musk told CNBC in 2016. “I am not sure what else one would do.” Says the former secretary of labor Robert Reich, “I keep running into executives of high-tech companies who tell me a universal basic income is inevitable, eventually.”

Inevitability, for a technologist, is false humility. If the future were merely inevitable, why bother becoming a technologist? No — the future, and particularly its economic arrangements, are shaped by people, by choices, and by power.

Universal basic income is a good idea, just as it was 50 years ago. It’s a simple, non-utopian reform that won’t solve any fundamental problems but will ease the hurt they cause considerably while sustaining consumer demand for the goods and services that businesses produce. A few hundred dollars a month or more could lift millions out of poverty, without the paternalism of welfare programs. It would liberate people to seek education or start a business. Workers would gain more leverage to walk away from bad jobs. We’ll never really know what more control over time will enable us to do, but I’d love to find out. 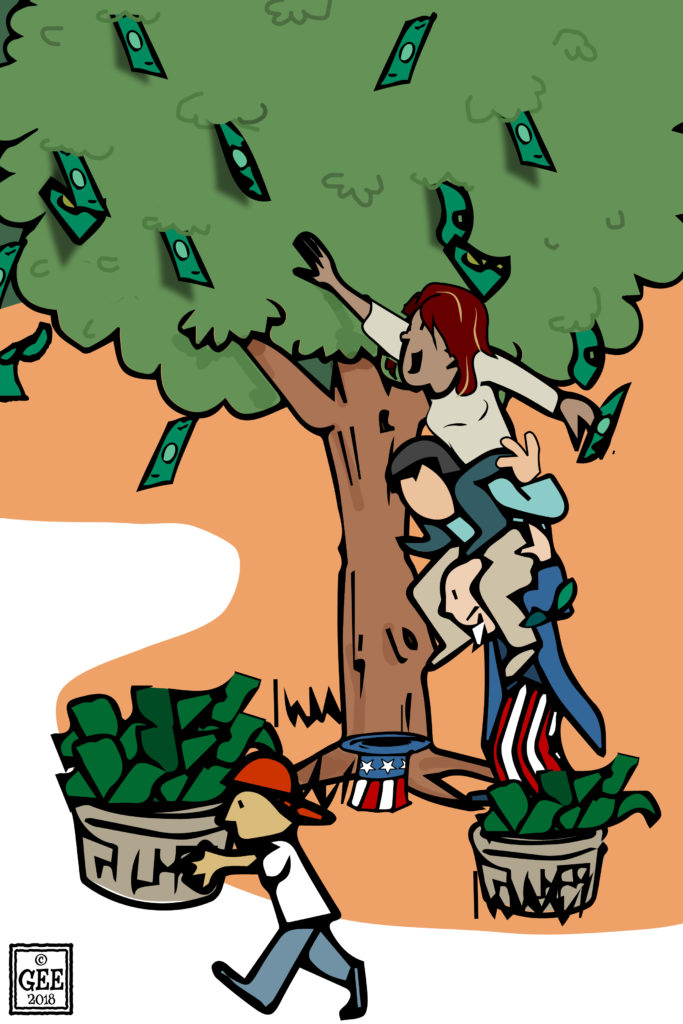 It would be expensive, however, and it’s hard to imagine such an outlay from a government that can’t even fix health care to the extent that every other wealthy country has. Maybe it’s so easy for the tech elite to talk about basic income precisely because they know it is not soon to happen.

This is going to require a fight. The common story is that the robots are the threat to workers, but robots are just robots. It’s not robots that need to be bargained with, or that can be. The real obstruction will come from those, as in times past, who will find it too tempting to keep on accumulating the benefits of automated efficiency for themselves. It will take a fight to ensure those benefits are really shared — not through philanthropic handouts, but through a recognition that prosperity is a collective inheritance.

Basic income advocate Peter Barnes, for instance, suggests deriving the funds from dividends on the use of such shared assets as clean air, the electromagnetic spectrum, and financial markets. This is like the model Alaska already uses to distribute about $1,000 from natural-resource wealth to each resident every year. The trouble is, too many industries are too used to regarding our shared assets as theirs to exploit. It is their shareholders we will be bargaining with. Sometimes, these shareholders are ourselves through pension funds or our 401k retirement plans.

Only people who are too busy to notice their own choices, or too mired in the way of things, can think that anything is inevitable. Basic income certainly isn’t. But should we someday win it, it’s tantalizing to imagine what other schemes the free time might enable us to deem possible.