The memories, Hertencia Petersen tells me, resurface when she appears to speak at rallies. Her nephew, Akai Gurley, was fatally shot by NYPD officer Peter Liang in 2014 in the darkened stairwell of a Brooklyn public housing development. Gurley, then 28, celebrated his birthday just eight days before his death.

“All of this, it rehashes wounds that you think are closing, but they are not closing. As long as the justice system is not doing anything to hold these police officers accountable, the only way for it to happen is for the whole system to be dismantled. Get rid of everybody, from the [Department of Justice] on down and put in people that have the ability to see both sides without prejudice.”

On the day of Liang’s sentencing, Brooklyn Supreme Court Justice Danny Chun reduced his conviction from second-degree manslaughter to criminally negligent homicide. Liang was sentenced to five years of probation and 800 hours of community service. “That’s what my nephew’s life was worth,” Petersen says. “It eventually takes a toll on your body. When every time you look around, here’s another senseless murder, and no one wants to be held accountable. Nobody sees what’s going on.”

When she learned of Stephon Clark’s killing in Sacramento, Calif., the case struck a familiar chord.

“My youngest daughter is 22. A 22-year-old was gunned down in cold-blooded murder. And that should not be happening anymore. It affects everybody. Until a white mother is crying, a white parent is going through what we’re going through on a daily basis — every 28 hours a black, or brown, or Latino is being murdered by those that took oaths to serve and protect.”

Clark was shot 20 times by the Sacramento police, who apparently mistook his cellphone for a weapon. Officers later turned their body cameras off while conferring over the young man’s bullet-ridden body.

Though there is video footage of the incident officials have yet to complete their investigation. But in Petersen’s opinion, the answer is clear: “How on God’s Earth can you mistake a white iPhone for a gun? Come on, stop with the lies. You was afraid. You saw a black man and was quick to shoot without finding out everything.”

The 22-year-old father of two’s death has skyrocketed into the national discourse since he was shot on March 18. It what has become an all too common tragedy, protesters accuse police, elected officials and the justice system of failing to protect black lives. This is an old story, and the paralyzing frequency of its repetition speaks volumes.

In New York, organizers with NYC Shut It Down called a gathering at Columbus Circle at dusk on the evening of March 28. A crowd of more than 1,000 assembled with posters bearing images of Clark’s face, listing the names of other men and women of color killed by police and calling for accountability and an end to violence in communities of color.

Kimberly Ortiz, 31, an NYC Shut It Down organizer sees the conversation around Clark’s death as a missing piece of the debate surrounding gun reform.

“We can’t talk reform if we’re not only going to disarm police officers,” she said. “Even if we have 100 percent what everyone is asking for in these laws, black and brown people are still going to die at the hands of police, so it doesn’t really help us in any way, shape or form.” 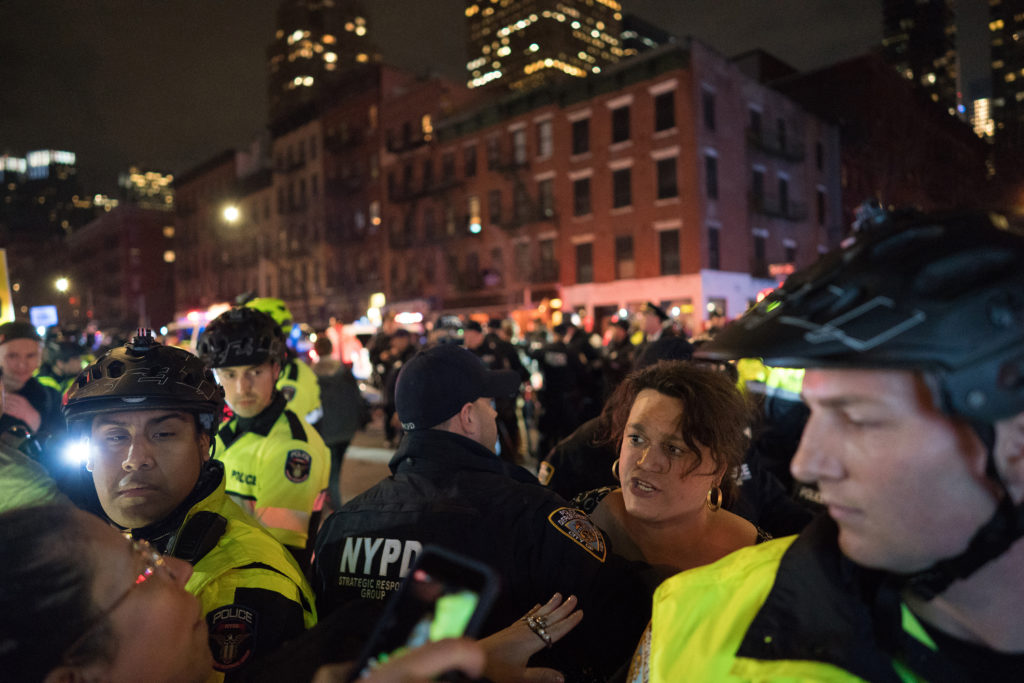 Ortiz and other activists successfully led a winding march through the streets of Manhattan, at points blocking traffic and forcing confrontations between protesters and police. Credit: Erin Sheridan.

Protesters cheered as speakers called for solidarity with Black Lives Matter and with all communities of color fighting for justice.

Clark’s case, according to both Ortiz and Petersen, has resonated across the country because it demonstrates so clearly the criminalization of black bodies.

“When these things happen, when our loved ones are victimized, the first thing they do is pull out your police record,” Petersen said, criticizing the media. “Where do they get the information from? From the cops. So you’re biased right there. Why are you victimizing the victim?”

Ortiz and other activists successfully led a winding march through the streets of Manhattan, at points blocking traffic and forcing confrontations between protesters and police. Dozens of NYPD motorbikes raced in lines through crowds on the street, both endangering marchers and creating confusion. Passersby filmed the skirmishes on cell phones — some expressed concern, others solidarity. Reports indicate that police arrested at least 11 participants.

“We have to march for our own lives the way we’ve been doing it and the way our ancestors have been doing it for hundreds of years now,” Ortiz said, making it clear that Stephon Clark will not be forgotten.