What does it mean to be unemployed? The answer depends on what kind of worker you are.

“Full-time workers see unemployment as a shock,” not just a cutoff in income but a collapse of civility and status, says Andrew Stettner of the Century Foundation, who’s spent years studying the changing workforce and the future of work. “But freelancers see it as endemic” ­— part of the cycle they struggle with all the time.

“You don’t know what I do — there’s never any ‘civility’ in my work!” Stettner recalls one freelancer saying about his interaction with employers. Another once told him, “In January there’s never any work, so I don’t leave my house, because then I don’t spend any money.”

The proletariat, in other words, is being replaced by the precariat.

Stettner was speaking in January at the National Academy of Social Insurance’s (NASI’s) public policy conference on “Nonstandard Work and Social Insurance.” Nonstandard work, from home health care aides to Uber gigs to fast-food service, all the way up the skills ladder to legal research and software coding, is redefining employment in the latest stage of the neoliberal economy. Actual jobs, with health and other benefits and some degree of security, are becoming scarce in hyper-competitive industries where employers pursue every gambit to keep workers off the payroll.

Most Americans still are employed in “traditional” jobs, but this is changing fast, especially in the years since the Great Recession began and especially in industries as diverse as manufacturing, leisure and even public administration. In 2005, 10.1 percent of the employed workforce were in alternative arrangements – temporary help agency workers, independent contractors, on-call workers – and by 2015 that figure had climbed to 15.8 percent, according to the Bureau of Labor Statistics. In raw numbers, that was equal to the entire growth in employment for that 10-year period. Without nonstandard work, in other words, there would have been little or no expansion in employment during the economic recovery.

The goal is to once again make employers and contracting organizations contribute to the safety net for their workers.

Hard numbers are no easy to come by for nonstandard workers in every industry, but home health care aides, the original gig economy workers, are one of the fastest growing occupations in the country. About 149,000 worked in New York City as of last July, a figure that grew by 12 percent in just one year. Some 4 million workers in New York City are estimated to do freelance work, although they may have more traditional employment as well.

The problem is, the social safety net hasn’t evolved to keep up. Programs like workers’ compensation, Unemployment Insurance (UI), Social Security and Disability Insurance, not to mention employer-based pension plans, were designed for a time when lifetime employment with dependably rising wages was typical. Today, more and more workers are falling through the cracks. And yet, nonstandard workers need the safety net more than traditionally employed people: less than one in 10 contributed to a retirement account and only about 13 percent of primarily self-employed people purchased health insurance through Affordable Care Act (Obamacare) marketplaces, according to a Treasury Department analysis.

The NASI conference had two objectives: to define the nonstandard workforce and the issues it faces; and, assuming the old pattern of lifetime employment isn’t going to come back, explore what can be done to turn temporary and contract work into something more than a way to survive from day to day.

The first was the easy part. According to an assortment of scholars, economists, entrepreneurs and worker advocates who spoke at the conference, misclassification of contract workers has become an enormous problem. More than one-third of individuals who should be full-time employees are wrongly identified as contract workers in states like Texas and North Carolina. Wage theft is common. On-the-job injuries are far more frequent among nonstandard workers (independent crews who service cellphone towers are especially at-risk). Home health care aides do back-breaking work for low pay (median annual wage in 2016: $22,600, according to the Bureau of Labor Statistics), often off the books. 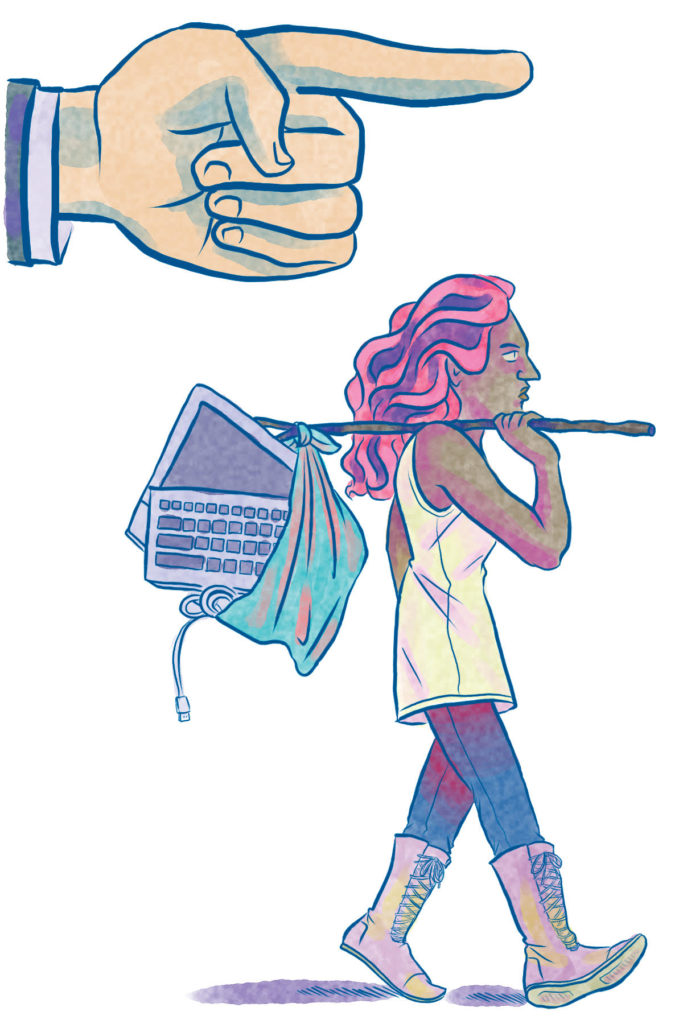 “Corporations have managed to distance themselves from accountability for workers,“ said Rebecca Smith, senior counsel at the National Employment Law Project. The social safety net hasn’t changed to fill the gap, “so we have to reorganize the safety net,” says Carmen Rojas, CEO of The Workers Lab, which sponsors projects to build worker power.

Some experiments are happening at the local level: Silicon Valley Rising, for example, has unionized some 5,000 workers like Facebook shuttle drivers and is pushing for Google’s deal to expand in San Jose to include a plan for more affordable housing. The city of Stockton, California last month launched a demonstration project providing a Universal Basic Income (UBI) of $500 to some low-income families and tracking what they do with it.

For any safety net program to provide nonstandard workers with the degree of security they need, however, “it’s got to be a regular feature of work, no matter what,” said David John, senior strategic policy advisor at AARP. At the same time, said Rojas, the solution mustn’t place a greater burden on workers, many of whom have little no savings.

Several participants at the NASI conference argued for extending the social insurance model, in which all workers contribute to fund a program that provides benefits to all and which includes Social Security, Medicare and Disability Insurance. The good news is that there was no shortage of ideas for doing so.

Two ideas heard repeatedly were to liberalize the eligibility requirements for UI, which has been cut drastically in recent years and is now available only to some part-time workers, and require employers that use nonstandard workers to pay a proportional share of their Social Security and Medicare contributions. That could be facilitated by creating a new category of “independent worker,” in between full-time employees and independent contractors, who can receive some benefits and Social Security contributions without requiring full employee status.

For some categories of workers, it may also make sense for consumers to foot some of the bill. In New York State, the Black Car Fund provides workers’ comp to black car and limousine drivers through a 2.5 percent surcharge added to the passenger’s fare.

A “job seeker’s allowance” for independent contractors and people who have exhausted their UI payments would help nonstandard workers who can’t find paying work, giving them extra leeway to pay for job training and reach potential employers. State-level self-employment assistance programs, which allow individuals to work full-time setting up their own businesses while still receiving UI, could be adopted by other states or turned into a national program.

A less ambitious goal that could prove extremely valuable for nonstandard workers is simply to enforce laws regulating worker classification more strictly, making sure they aren’t abused to save employers from having to pay benefits.

The not-so-unspoken goal behind many of these ideas, however, is to once again make employers and contracting organizations contribute to the safety net for their workers. The expansion of the nonstandard workforce is good for businesses that want to lower labor costs and offload as much of their benefits costs onto workers as possible. “Companies don’t view it as their responsibility to provide benefits anymore,” said Aparna Mather, a resident scholar at the Economic Policy Institute. Creating an “independent worker” category would require employers to again make ay some portion of Social Security and Medicare contributions for more of their workers. Expect pushback.

“How do you build solutions that don’t burden poor people to solve the problems of the economy?” Rojas asked. Worker self-organizing is critical, several conference speakers emphasized. Home care workers have had some success improving their pay and benefits by organizing their own agencies and through campaigns organized by the National Domestic Workers Alliance, for example.

New York has been a focal point for some important organizing efforts, bolstered by a series of new labor laws passed under the de Blasio administration. Last year the Freelancers Union helped push the Freelance Isn’t Free Act through the New York City Council; the law requires a written contract for any work valued at $800 or more and establishes the right to be paid in full by the date specified or within 30 days after work is completed. In December, Fast Food Justice was organized as a non-profit to bring together the city’s 50,000-some fast-food workers in response to a new law that gives them the option of deducting contributions from their paychecks to fund nonprofits that provide services and advocate for members – although not to negotiate wages for them.

Before getting too deeply into the details, however, “we need to ask ourselves what our solidarity is for,” Rojas suggested. “I don’t care about an extra $200 a month — I want my child to go to decent schools.”

The problem, in other words, is not money: it’s the resources, opportunities and benefits available to nonstandard workers and their households. In a precarious economy that vacuums up much of their earnings just to pay for housing, health care and transportation, reforming the safety net to make sure it encompasses people who don’t make a living in traditional ways is just as important is as cash.