THURS MARCH 8
All Day • FREE
PROTEST: A Day Without a Woman — Women’s Strike
On International Women’s Day, women and our allies will act together for equity, justice and the human rights of women and all gender-oppressed people, through a one-day demonstration of economic solidarity. Rally starts 5 p.m. in Washington Square Park. March begins at 6.
Everywhere

SAT MARCH 10
2 PM–4:30 PM • FREE
MOVIE SCREENING: The Untold History of the United States
The second in a four-part series on the first four chapters of Oliver Stone’s Untold History which spans the events leading up to United States entry into World War II until the outbreak of the Korean War.
Mulberry Street Public Library
10 Jersey St., Mnhtn 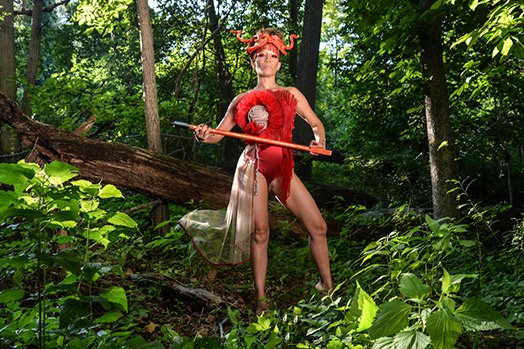 Yelaine Rodriguez, Shango: We are here, because you were there, 2017, headpiece/sculpture, costume design. Photo credit: Melanie Gonzalez.

WEDS MARCH 14
10 AM & 5:30 PM • FREE
PROTEST: NYC School Walkout & Evening of Action for Gun Reform
Citywide high school walkouts for gun sense begin at 10 AM, followed by a 5:30 PM “Evening of Action,” at which students will channel their outrage into concrete policy demands and lay the groundwork for a student-led gun control movement. Register your school for a walkout. Evening gathering begins at 15th Street Quaker Meeting House followed by a rally at Stuyvasent Park.
15th Street Quaker Meeting House
15 Rutherford Pl., Mnhtn