The Indypendent
Menu
A Free Paper for Free People
What Will It Take?: Strikers gather during the International Women’s Strike as the sun begins to set on Washington Square Park. Credit: Erin Sheridan.

Freezing temperatures didn’t stop hundreds of women from making their way to Washington Square Park on March 8 to celebrate International Women’s Day and join a strike in solidarity with women and workers around the world. I spent the day talking to women from various backgrounds — students at the New School fighting for fair wages for school employees, socialists, baristas at a pop-up cafe who served coffee to protesters out in the cold, a strike organizer.

The question on everyone’s mind: What will it take to build a society that values those most marginalized? These women might not have all the answers, but they’ve pinpointed the problem — a political and economic system that seeks to divide and exploit workers and communities across the board. Here’s how they’re fighting back. 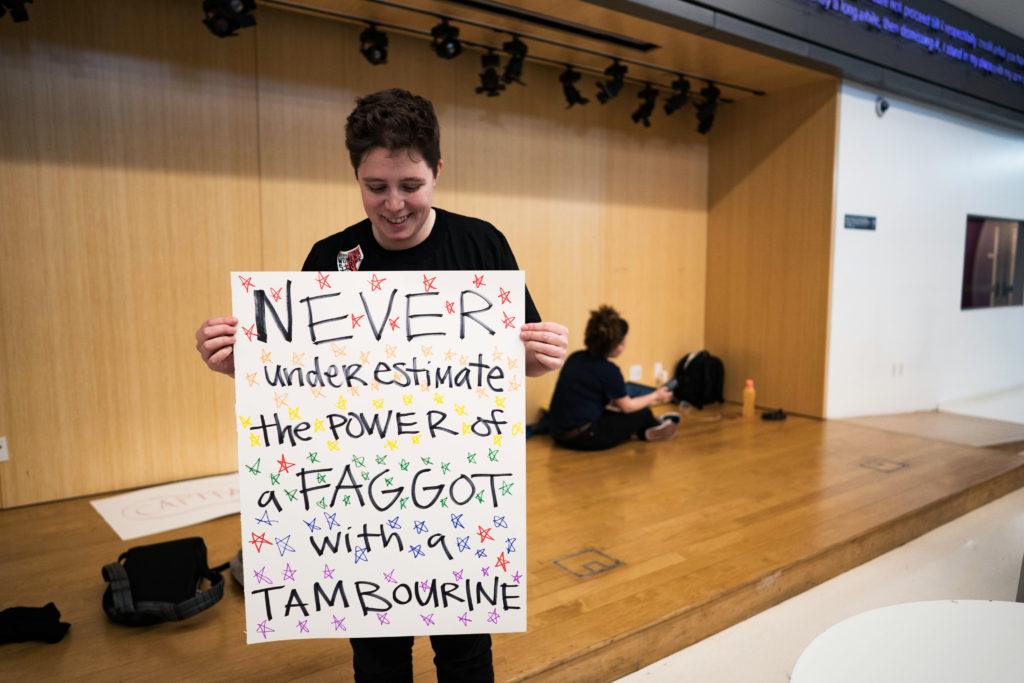 The International Women’s Strike — unlike things you’ve seen a lot around the United States right now like the Women’s March that are associated with the Democratic Party — is an anti-capitalist protest. It’s something that you see happening in 54 countries around the world this year. You see people in Spain, people in Italy, people in Argentina all walking together in solidarity, walking out of their workplaces, to make the particular point that women’s labor is something that runs the world. It’s not only labor for pay; it’s often unrecognized, unpaid labor that keeps people ready for work the next morning.

My office, for example, is staffed by 83 percent women. I often do care work, things that are undervalued like editing work. These are occupations where women are taken advantage of and labor is done on our backs for the profit of bosses.

Capitalism is something that keeps people down in a wide variety of ways. And that’s based on a series of structures that exist to continue the exploitation of people based upon what they look like, where they come from and who they’re living under. 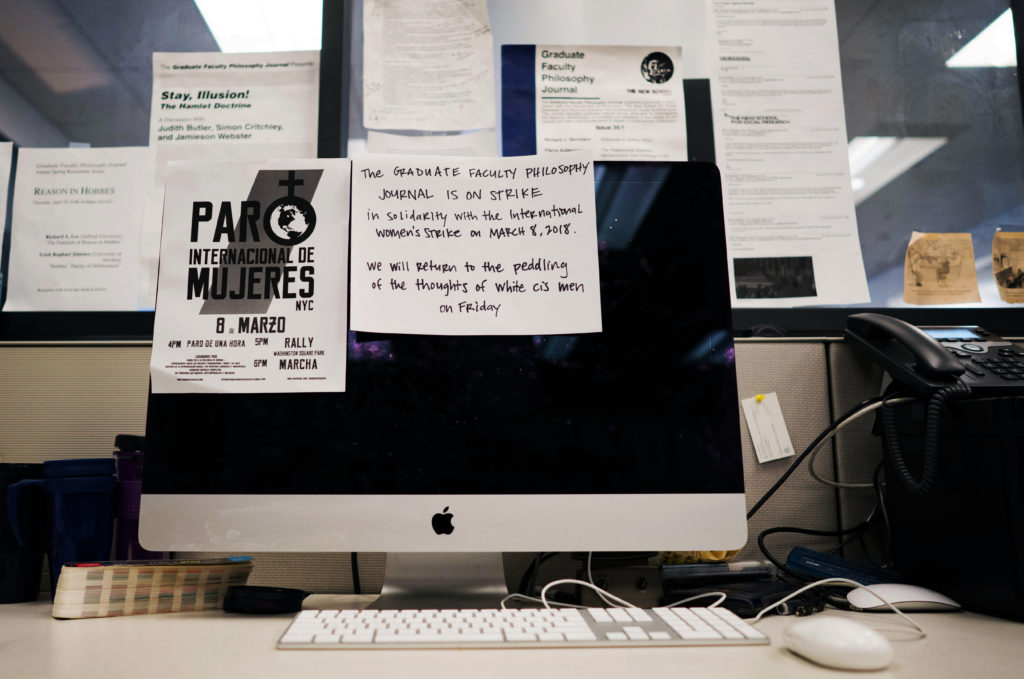 A note in case the bosses are wondering. Credit: Erin Sheridan.

The New School is in bargaining negotiations right now with its graduate students. We have been attempting to unionize for quite some time and finally won our vote. We had a strike authorization vote early last week, with 99.4 percent of votes in favor of a strike. We will have the opportunity to take a strike action if negotiations keep progressing the way that they are.

The New School is generally ignoring the wishes of students, using a series of tactics of distraction to keep us on smaller issues that can be solved by simple changes in HR, so we can’t get at actual issues like health care, pay, tuition.

I kind of had a meltdown after the election of Donald Trump and decided to join the DSA and progressively got more and more involved over the last year. We are in full support of the platform of International Women’s Strike. It’s intersectional. It is in support of working-class women and women of color, not just white women. We have seen too much of that specific brand of white feminism that’s from the Democratic Party. We’re not interested in it. And it’s recognizing the labor of all different types of women and demanding equality for our gender.

We have to keep doing this every year and convincing people our anti-capitalist platform goes hand-in-hand with gender equality. Capitalism and feminism are not mutually exclusive. It’s very difficult to have fully-encompassing intersectional feminism in a capitalist society.

Amanda Trainor — Artist and a member of the Co-op Cafe 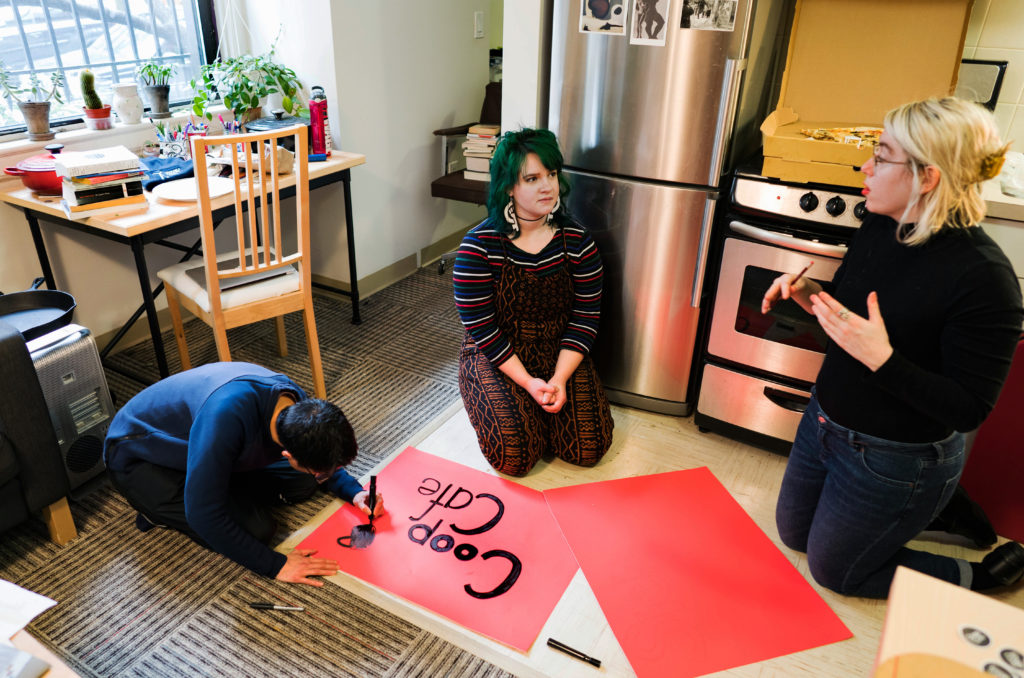 Amanda Trainor (center) speaks with fellow members of the Co-Op Cafe as they prepare to join the rally in Washington Square. Credit: Erin Sheridan.

I’ve been involved with the Women’s Strike through relationships I built. The reason I wanted the co-op to really get involved today is because we’re mostly women-owned and we’re supposed to be striking today. Yet, as you see, women are kind of carrying it and I think that’s the same for all organizations. We carry families and communities. So to me it’s really important to come out.

I’m lucky that I can strike just because I can call out of work and not get fired. Striking is important but I recognize that a lot of women can’t be here today and so I really like that we can show up for them.

I came to the International Women’s Strike wanting to build connections between the trans women’s movements and trans liberation movements and broader struggles against capitalism and the gendered violence of capitalism. 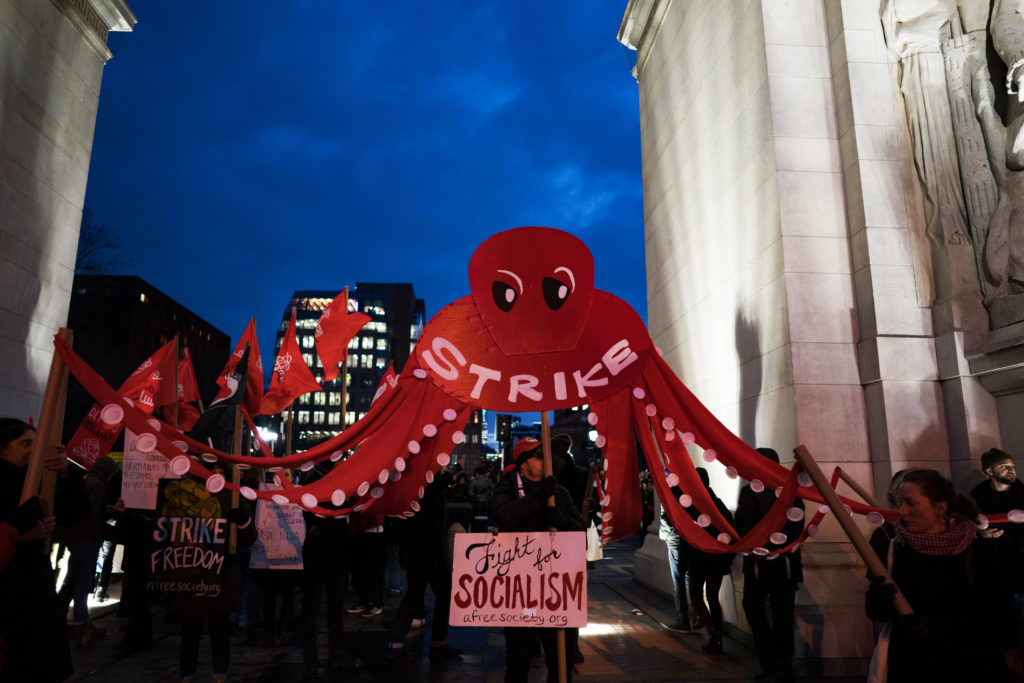 The red octopus was chosen as a symbol of resistance by the International Women’s Strike organizers in New York. Credit: Erin Sheridan.

We’re carrying these giant octopus props because octopuses have long been used as a political image in a really nasty, evil way. They’ve been used to represent the conspiracies of communists and jews and evil corporations infiltrating of all parts of society. The International Women’s Strike is taking a bold, unique, historical stance in support of the octopus as a symbol not of conspiracy, but the manifold forms of care labor being done by women and queer people and the reproductive labor we do in society — the manifold forms of women’s resistance.

We have two octopuses. One of them, every arm is doing different forms of reproductive labor. And the other, every arm represents a different form of solidarity and resistance and struggle.

There are many extraordinary things about octopuses. They can escape through very small holes that are much smaller than they are. They are extremely smart. They have brains spread out through their arms. They can change colors thousands of times a minute. It’s breathtaking — the versatility, the dynamism, the cleverness, the creativity, the intelligence of the octopus. So we’re very proud to have the octopus as our symbol of resistance, the red octopus. 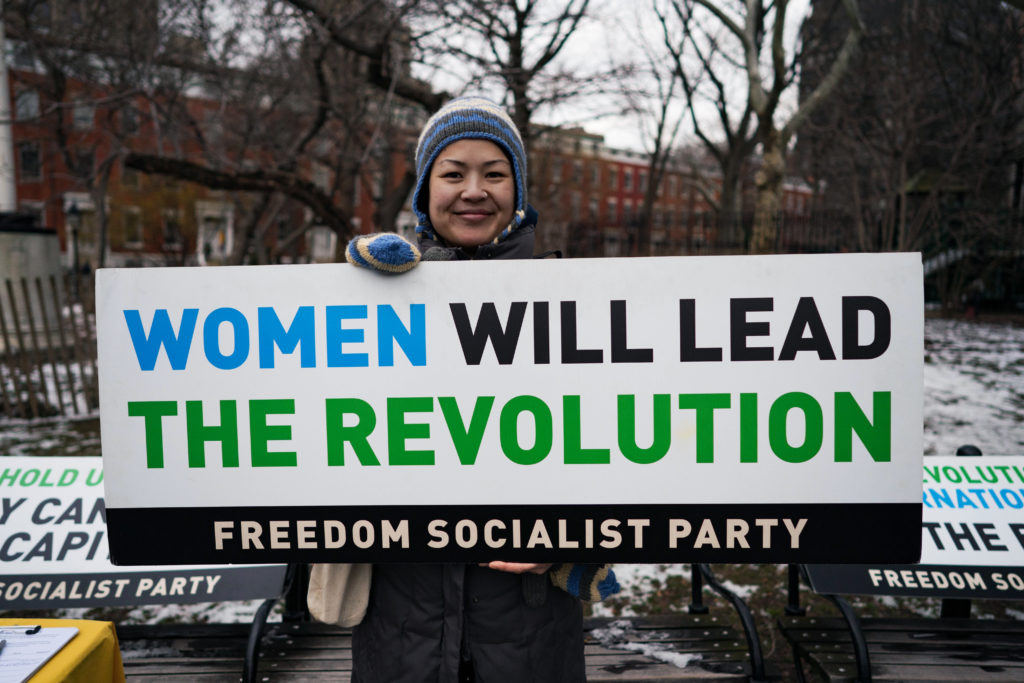 Women probably do half the labor if not more of the labor in this country and are not recognized as such. We keep hearing the popular “women make 76 cents on the dollar” that men make, but if you talk about the different intersectional identities of say a black woman or a queer woman, or whoever else — obviously capitalism is exploiting women way more. That’s not to say that men don’t get exploited too, but women unfortunately get that much more shit at the end of the day. 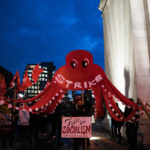 The red octopus was chosen as a symbol of resistance by the International Women’s Strike organizers in New York. Credit: Erin Sheridan. 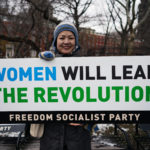 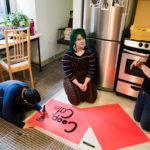 Amanda Trainor (center) speaks with fellow members of the Co-Op Cafe as they prepare to join the rally in Washington Square. Credit: Erin Sheridan. 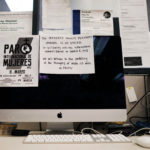 A note left at the New Schools office, in case anyone wonders where their graduate students in philosophy went. Credit: Erin Sheridan. 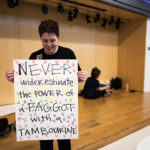 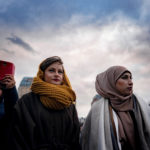 What Will It Take?: Strikers gather during the International Women’s Strike as the sun begins to set on Washington Square Park. Credit: Erin Sheridan. 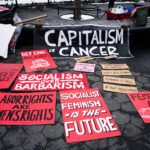 An assortment of signs highlighting the intersection between women’s rights, workers’ rights and the need to break away from capitalism. Credit Erin Sheridan. 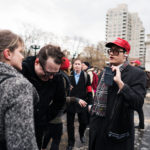 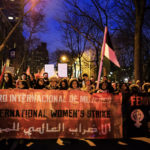 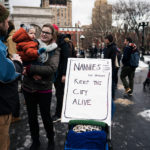 Photo (top): What Will It Take?: Strikers gather during the International Women’s Strike as the sun begins to set on Washington Square Park. Credit: Erin Sheridan.