The auditorium at Elmhurst Hospital was packed, Tuesday, with Queens residents voicing opposition to the proposed construction of a 13-story, mixed-use development slated for 82nd Street in the heart of Jackson Heights. If approved, activists fear the development, which includes a Target mega-store, will intensify gentrification and force small businesses in the working-class, immigrant community to close.

The meeting was convened by Queens Community Board 4 (CB4) and was held to vote on whether to approve the rezoning of the property that developers Sun Equity and Heskel Group requested. Unrelenting, the crowd refused to heal to multiple pleas for quiet from the board chair, as they booed, cheered and chanted.

After hours of fierce heckling from the crowd and heartfelt testimony from concerned community members, the board voted nearly unanimously to reject the rezoning proposal. In fact, it went further, recommending that the land be down-zoned, which would obstruct the possibility of similar development plans in the future.

The message was clear: Developers may have put a literal target on the back of Jackson Heights but the residents intend to shake it off.

Activists saw the board’s recommendation as an important victory against the pressures of overdevelopment and gentrification. “Tonight our community WON a crucial victory against Sun Equity Partners and Heskel Group,” read a message posted on Queens Neighborhoods United’s  Facebook page. “With that, the ball returns to our court as a community to direct CB4 exactly how we’d like to protect our small businesses.”

Sun Equity and Haskel have promised a slew of concessions intended to placate the opposition, which so far is unmoved.

Currently, the land they intend to build on is only zoned for the construction of a 10-story building. In exchange for the upzoning, the developers have offered to lease 1,996 square feet of the property at a reduced rate to a local nonprofit and to reserve 30 to 36 of the 120 housing units they plan to build as “affordable.” But the affordable units will be set at 80 percent of Area Median Income (AMI), meaning a family of three would have make $68,700 a year to move in. The neighborhood’s median income is $44,865 a year. 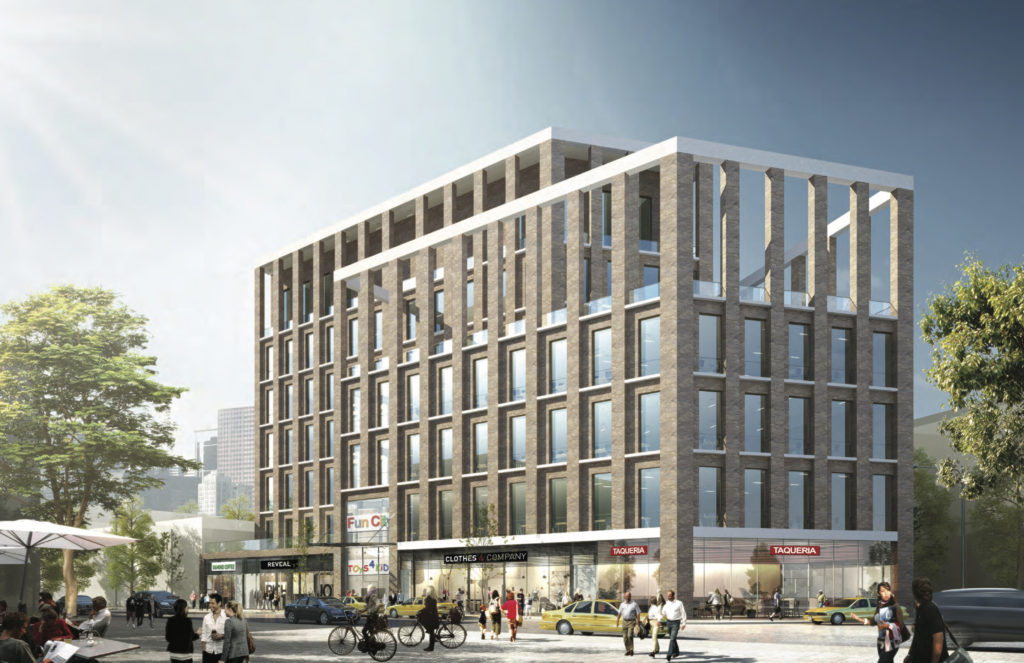 Sketch of the proposed development. Note that unlike the mockup above the 82nd Market is out of the picture. Credit: Sun Equity Partners/Inline Realty.

“The whole concept of relying on private developers to build affordable housing does not work,” said Shekar Krishnan, a local community lawyer. “The incentives don’t align and developers like these will not build housing that is really affordable enough to benefit our community.”

“Let’s call a spade a spade,” remarked Arturo Sanchez, a professor of urban planning at LaGuardia Community College. “What’s happening on 82nd Street is the corporate gentrification of our neighborhood. What we are seeing is not just the destruction, but the expulsion of residents and small, immigrant-run businesses.”

Unfortunately, however sweet the victory on Tuesday might have tasted to opponents of the project, the bitter truth is the community board’s decision is only advisory. City officials are under no obligation to honor the recommendation. Outside of approving liquor licenses, community boards are effectively paper tigers. There is nothing approaching direct democracy in New York. Frequently, community board decisions against rezonings are blatantly ignored, as was the case in 2015 when Brooklyn’s Community Board 5 voted against the rezoning of East New York. Disregarding the board’s decision, the City Council approved the rezoning anyway.

Jackson Heights residents may have received a morale boost but they will have to ramp up their efforts against the development as the plans go before Queens Borough President Melinda Katz in the coming months and ultimately to the City Council and the mayor. Until there is a broad, city-wide movement demanding community boards be given veto power over developments, real-estate interests will continue to force there will upon New York City. If New Yorkers intend to permanently stop unwanted developments in their neighborhoods, they must be prepared to not only fight the power but to take the power.

Amir Khafagy is a self-described “Arab-Rican” New Yorker, born and raised. A journalist, political activist, organizer, writer, and performer, Amir is currently perusing an MA in Urban Affairs at Queens College. He can be reached at amirkhafagy@gmail.com.