That’s it, we’re storming the castle. On April 23, thousands of New Yorkers are showing up at Gov. Andrew Cuomo’s front door in Albany to demand genuine action on climate change. We’re not going to bus up just to go “rah-rah-rah” on the steps of the statehouse for the press and going home. We have three specific demands: halt of all fracking infrastructure now, a just transition to 100 percent renewables, and make corporate polluters pay into a transition fund.

We will meet in Albany at noon, at the site of a proposed fracked-gas plant slated to power Empire State Plaza and hear from local residents on Sheridan Avenue. Then we will march to the Capitol building and peacefully walk through its doors.

How did we go from congratulating Gov. Cuomo for banning fracking, vetoing the Port Ambrose LNG terminal and stopping two pipelines to storming his castle?

Let’s back up to January 2017, when Cuomo declared, “The state must double down by investing in the fight against dirty fossil fuels and fracked gas from neighboring states.” This is precisely the kind of bold statement that continues to come from this administration sans action to make genuine, big-picture progress a reality.

Just four months later Cuomo appeased his fossil fuel donors by playing right into the industry narrative that fracked gas is a necessary bridge to a renewable economy. “I don’t think you can get from here to there without using natural gas,” he told the Buffalo News.

What happened to doubling down against fossil fuels?

Record scratch! What happened to doubling down? Of course, we can start building a renewable energy future now without fracked gas. However, that will require a shake-up of our economic system, which feeds the power structure that supports Cuomo. In order to protect what’s most important to him, his donors and his liberal voter base, he’s opted to hide his contradictions in the closet.

If we look at a map of the fracking infrastructure of New York State, it’s clear that we have a fracked gas problem.

Transmission lines, frack waste dumps, storage and support infrastructure are expanding. All expansions must go through a state approval process. We’re elated for the successes our environmental movement has had pushing the governor to halt specific projects, but had it not been for our work to mobilize constituents he considers crucial to his reelection, he would have approved all of them. He continues to ignore local communities working to protect their health, safety and democracy from the fossil fuel industry in regions of the state he deems disposable.

How does Cuomo keep getting away with it?

We can start building a renewable energy future now without fracked gas.

To maintain his environmentalist facade, the governor launches flashy websites like rev.ny.gov. Reforming the Energy Vision (REV) is framed as a network of locally-owned renewable energy microgrids. Meanwhile, his policies drive capital to the same old power structure, creating another destructive pattern. If we are to genuinely shift the system onto a renewable economy, we should shift our system of investments into renewables instead of using our renewable tax dollars to fund the fossil fuels in secret. Cuomo’s “Energy Czar,” Richard Kauffman, a former chair at Goldman Sachs, revealed the administration’s backstage reality in a February blog post, after New Yorkers, initially excited about the project, started asking why it was increasingly difficult to get renewable energy access. 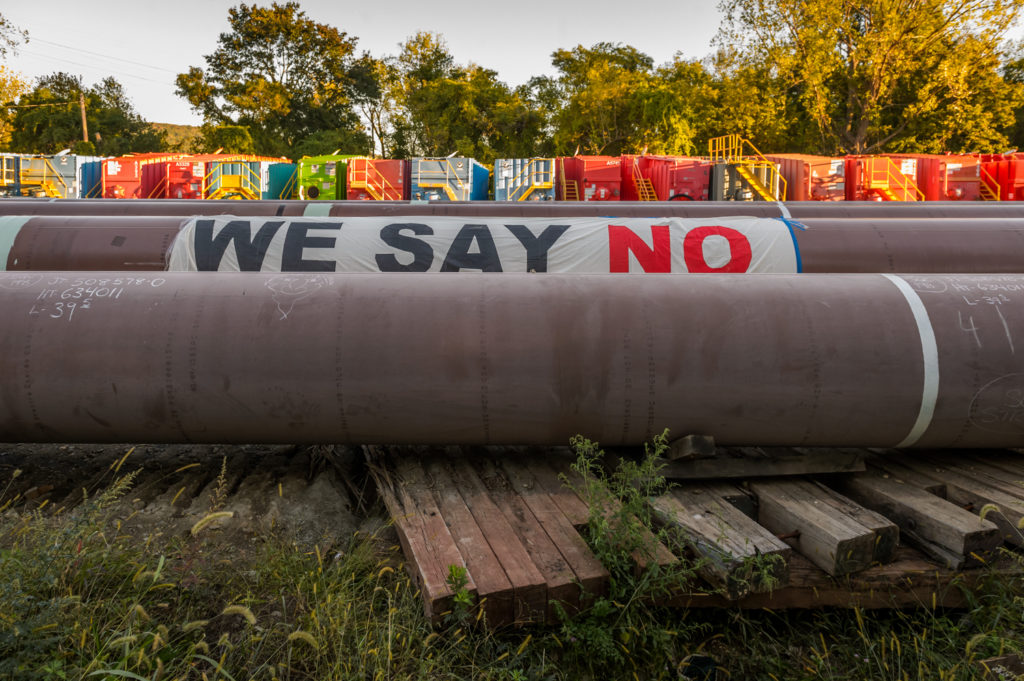 A message from activists on the Algonquin pipeline. Credit: Erik McGregor.

“The goal of REV, and New York State energy policy in general, is not necessarily to make solar work for every customer right now,” according to Kauffman. “The economics are not going to pencil out for every customer in every location in the state.”

While Governor Cuomo aims at climate hero status by making popular statements and congratulates himself for defying President Trump by announcing he will stand by the (very low-bar) Paris Climate Accord, his administration is busy figuring out how to continue to support the corporations that create climate destruction. That sure doesn’t sound like a reform of our energy system at all.

It is crucial that we come together on April 23 to force Cuomo and others playing decision-making roles in Albany to take climate change seriously. We will carry our demands on hand-crafted signs with drummers and trumpeters at our side. We know we can succeed here in New York because we have a track record building movements that shift popular consensus. Gov. Cuomo is up for reelection this year. Now is the time to fight for our entire region to push for the required action to protect our lives and build a future worth living.