The Indypendent
Menu
A Free Paper for Free People
Lizette Colón (far right) hosts a gathering of Puerto Rican women at her apartment to prepare for a rally outside City Hall. Credit: Erin Sheridan.

On the evening of April 18, the sun is just beginning to set over the Penn South complex in Chelsea as Andrea Tejada, Branda Suarez and Sofia Miranda walk into the colorful 17th-floor apartment of Lizette Colón, a counselor and union chapter chair at Hostos Community College in the Bronx.

The three women, who have been living without permanent housing since they left Puerto Rico after Hurricanes Irma and Maria devastated the island last September, are preparing to speak outside City Hall the next day. The event was organized to protest the impending eviction of 83 Puerto Rican families on April 20, after the Federal Emergency Management Agency (FEMA) declined to renew housing assistance it distributed through its Temporary Shelter Assistance (TSA) program.

“I do not have a roof over my head. Not even here, not even in Puerto Rico,” Tejada remarks in Spanish.

Their mood is brighter than would be expected. Earlier that afternoon, it had been rumored that the city would temporarily foot the bill for housing, preventing families from becoming homeless until the next TSA renewal deadline in May. But the three women and many of the 2,600 Puerto Rican hurricane refugees here still lack permanent housing and adequate help to navigate the welfare system, deal with language barriers and get psychological support.

They call it “the limbo,” says Colón. On April 5, four months after their arrival in the city, Tejada and her four-year-old daughter, Jadieliz, were evicted from their hotel room and placed in the Bronx’s PATH shelter, only to be later removed on the grounds that Tejada had to exhaust support from all other programs before she could enter the city shelter system.

“Already twice they have told me to pack because they would throw me out,” Tejada says, through Ana Lopez, a professor of Latin American and Caribbean studies at Hostos who helped with translation that evening. “And my daughter says ‘Mama, do I help you pack again? Are they going to kick us out?’ And then she says, ‘Imagine me, every time I put the card — is it going to turn green? Is it going to stay red?’” The electronic key cards they use to get into their hotel room turn green to let them in and red if access is barred.

“They’ve had to navigate the whole welfare and public agency system here and they’ve been thrown from one agency to the other — it’s like ping-pong,” Lopez, translating for Miranda, says. “And it is really exhausting.”

“I spoke to someone from legal services that is servicing families in the Bronx,” she adds. “And she said that the hotels get $8,000 a month for housing them. With $8,000 a month, these families can have permanent housing — for less.”

Currently in New York State there 157 families checked into hotels under FEMA’s TSA program. Each family receives some money through public assistance and SNAP benefits. Sitting at Colón’s kitchen table, Miranda says she receives $145 every two weeks for herself and her son. Suarez, who left two daughters behind in Puerto Rico in order to seek medical care for her 80-year-old grandmother, who suffers from dementia, says she gets $178 bi-weekly. According to FEMA spokesperson Daniel Llargues, any rental assistance families may be eligible for through FEMA’s Individual Assistance program is based on a U.S. Department of Housing and Urban Development (HUD) assessment of market values in Puerto Rico, which likely would not cover the cost of rent in New York City.

The women have struggled to find a way to produce a stable income. Miranda is working as a home attendant, but had to cut her hours “because when she was working extra, she didn’t qualify for the rest of the services,” Colón says, translating what Miranda told her. “It’s a catch-22. If you work, then you don’t have the services. So she has opted out because she has a son in school.”

“And Andrea, she has a daughter,” she adds. “The daughter is in school, and she’s trying to get a job. But then between all the things that you have to do with so many appointments, there’s no way that you can keep a job. She has a bachelor’s degree in criminal justice.”

Living in hotel rooms also causes other problems. “They cannot cook, because they don’t have a kitchen,” Colón says. “So it’s a catch-22 because the money doesn’t last.”

The regularly threatened housing-aid cutoffs hit women and children the hardest and show the government’s disrespect for Puerto Ricans, argues Lopez. “In other states and even in New York, hurricane-disaster evacuees did not have a term limit in housing aid,” she says. “They were put in a hotel until housed in permanent housing. No one was ever kicked out. So it appears Puerto Rico is not treated with same respect and dignity.”

Tejada struggled to find food in the months following the storm. Her apartment in San Juan was flooded and condemned for being unfit for human habitation, and power outages were frequent. The final straw was when her daughter saw three muggers kill an older man.

“The little one saw it from the balcony,” she says, translated by Lopez. “They were on the balcony getting air, it was dark, and there was no electricity. She actually saw the man get killed in front of her. And she remembers.”

The refugees got a temporary reprieve on April 20, when FEMA, responding to a request from Puerto Rico Governor Ricardo Roselló, announced it would extend TSA funding to Puerto Rican families for another month.

Peter Gudaitis, executive director of New York Interfaith Disaster Services (NYDIS), argues that while it is legally the federal government’s responsibility to assist evacuees, the city’s response has also been inadequate. In February, it quietly closed the emergency service center at the Julia De Burgos Performance and Arts Center in East Harlem, which had been set up to help evacuees from Puerto Rico and other hurricane-devastated areas last September.

“People that chose to come to New York and are here in New York are New York City’s problem, whether they get federal funding or not,” Gudaitis says. “Because the alternative is just that they end up on the street or in the shelter system, or they have mentally ill children, or they’re getting dumped on hospitals if they have medical problems and they can’t pay their bills.”

While organizations like NYDIS can help families move into apartments with rental deposits, furniture and transportation, applicants have to prove that they can afford to pay the rent before they can access those services, Gudaitis notes. And Puerto Rico has yet to be rebuilt, with another storm season coming in a few months.

“The governor of Puerto Rico says they want people to return to the island. Return to what exactly? A damaged home with no power, no access to water? A hospital that’s two or three hours away that’s barely functioning on generators still?” he says. “It’s like sending people back to a war zone.”

Miranda says she’s not going back. “She said that in two months she was able to complete a home attendant course, she got certified and it is with a lot of pleasure that she will be taking care of the elderly,” Lopez translates. “Here she says there is an assurance of electricity, water. She’s going to continue to study. And her son is going to school and that’s a sure thing — in Puerto Rico the schools are closed. She feels she can reach certain goals here.” 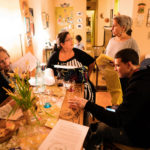 Lizette Colón (far right) hosts a gathering of Puerto Rican women at her apartment to prepare for a rally outside City Hall. Credit: Erin Sheridan. 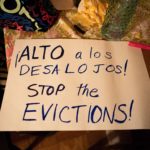 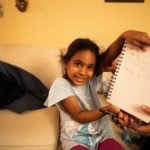 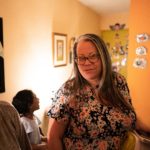