The Indypendent
Menu
A Free Paper for Free People
Students taking part in the occupation of the New School's Cafeteria this May. Credit: Erin Sheridan.

An ongoing student occupation at the New School entered its second week, Tuesday.

In response to the university’s plan to fire 45 cafeteria workers, students packed inside the school’s 2nd-floor cafeteria on May 1 and began expropriating food. Posters decrying capitalism and the administration’s efforts to stifle the voices of unionized workers line the cafeteria’s walls. Students sleep on couches and underneath a section of tarp that has been outfitted with makeshift beds. There is a first-aid station, areas to cook, serve food and wash dishes. Extension cords wind along the floor behind seating areas and hang from the ceiling, allowing students to charge computers and mobile phones. In the cafeteria’s back corner, students attend workshops, like a May 4 security and de-escalation training led by a volunteer attorney.

“The whole purpose of this struggle is to make links with working-class people and to unite students with workers, which isn’t really happening in a lot of student activism around the country,” remarked Robert Griswold, who studies politics at the New School and is a member of the Communist Student Group (CSG) which organized the occupation. Griswold says not to let the fact that the occupation is taking place at a liberal university fool you. “The workers are struggling against actual capitalists. The board of trustees is made up of bankers from Deutsche Bank, CEOs, capital investors, real estate investors.”

‘The reason that this administration felt that it could do this is precisely because these people are workers of color.’

In March, students at the New School received notice that the cafeteria workers — almost entirely people of color, many of whom are women, who serve 3500 meals daily — would be laid off when their contracts through Chartwells, a contract food service provider, ended in May. Through a plan devised by Steve Stabile, the New School’s treasurer, a small minority of the workers would be rehired at lower wages and with significantly reduced benefits. The remainder of jobs would be converted into lower-wage student work-study positions. Those who wanted their jobs back would be asked to re-apply and compete for the new positions.

“The reason that this administration felt that it could do this is precisely because these people are workers of color,” emphasizes graduate philosophy student Morgan Smith. “It’s really important for people to show up to be in solidarity, to give them support.”

On top of the mounting stress of impending joblessness, laid off cafeteria staff would lose their pensions, compounding the uncertainty of their predicament. The workers were kept out of discussions by the university despite being unionized through UNITE HERE! Local 100.

Coinciding with the occupation, full-time cafeteria workers have gone on strike. The administration called in temporary workers on day one but they fled the cafeteria amid jeers of “scab” and have not returned.

The number of students taking part in the cafeteria occupation fluctuates throughout the day, with approximately two-dozen remaining overnight. According to organizers, donations are pouring in from across the country, but the occupiers haven’t seen much support from faculty on campus, with the exception of a statement of solidarity from the Global Studies department and from individual professors who have offered to extend deadlines on classwork.

Yet support has also come from unexpected places. The school’s maintenance staff and even its security guards have endorsed various communiqués issued by the occupiers criticizing the university for the layoffs. 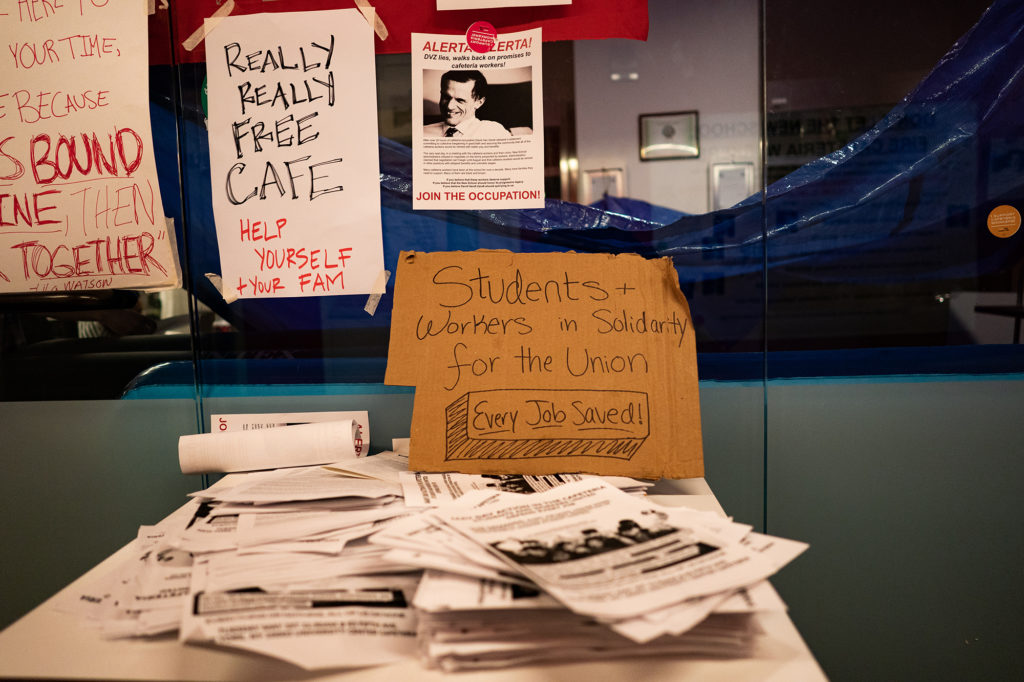 CSG generated an overwhelming amount of literature in the cafeteria for distribution around campus and online. Stacks of flyers litter tabletops, chairs, and the hallway outside the cafeteria. A flyer entitled “ON CAPITALISM AND THE UNIVERSITY” accuses the New School of functioning as a for-profit corporation despite its nonprofit status. Another flyer accuses the cafeteria’s head chef, Brian Duhart, of cooking vegan food in bacon grease and of receiving a $20,000 raise while his staff are facing layoffs.

In a video shot by students on May 2, David Van Zandt, the school’s president, is seen walking into the occupied cafeteria with Maya Wiley, senior vice president for social justice, in an attempt to bargain with the students and workers.

“I feel like I wasn’t appreciated,” cafeteria worker Abad DeGraffe told Van Zandt. “Here I am two years. … I’m a native New Yorker. I’m a veteran of the United States Marine Corps and now I’m getting treated like this?”

“I understand your concern,” responded Van Zandt, who claimed that all cafeteria jobs would be saved, that workers would be hired by the university at equal or higher wages, and that the workers would also receive benefits and tuition vouchers. The following day, however, union representatives and workers came back from a closed-door meeting with administrators and told the occupiers that although the school would rehire its cafeteria staff it was still seeking to strip them of benefits and to cut their wages.

“That’s a pattern that the New School has adopted, to say something for publicity and do something completely different,” says graduate student Meg Beyer.

Students intend to pressure the administration until every single worker has a contract in writing that includes a livable wage, full benefits, tuition vouchers and until Steve Stabile resigns. Over the course of the occupation, student and worker demands have expanded to also include the resignation of Chef DuHart and the “full reimbursement for all workers’ salaries withheld due to the occupation.”

Others have criticized the CSG’s tactics, describing their use of anti-union literature as particularly problematic. As one student opined in the school newspaper on Monday:

On the one hand, the organizers castigate the New School administration for union-busting, a valid criticism. On the other, the organizers delegitimize Local 100, claiming that it “impedes the formation of a unified camp of struggle by sacrificing some workers in order to maintain good relations with the enemy.” They also condemn unions generally, claiming that unions inhibit their workers from organizing properly. “We believe unions cannot be relied upon. The workers can count on only their own political organization: the revolutionary Party of the future,” wrote the CSG.

Apparently, the only proper form of organization is the particular communist ideal of the CSG.

That same day, the New School released a joint statement with Local 100 announcing that the school and the union had reached a temporary agreement under which the cafeteria workers will remain on staff and keep their current benefits while new contract negotiations are underway.

“The New School and UNITE HERE Local 100 together ask that everyone allow the University Center cafeteria to resume all normal operations for the benefit of the workers, their families, students preparing final work for the term, and the entire New School community,” the release states.

CSG issued a statement of its own, describing the agreement as “yet another tactic to deflate union energy on campus during the week of the strike.”

“The student body found out about [the agreement] before the actual workers that the union represented,” said Griswold. “The workers have asked us to stay here until the contract is completely finalized. They were pretty shocked to hear that the union had called off the occupation without consulting the workers. We’re going to stay here until the workers ask us to leave,” says Griswold. 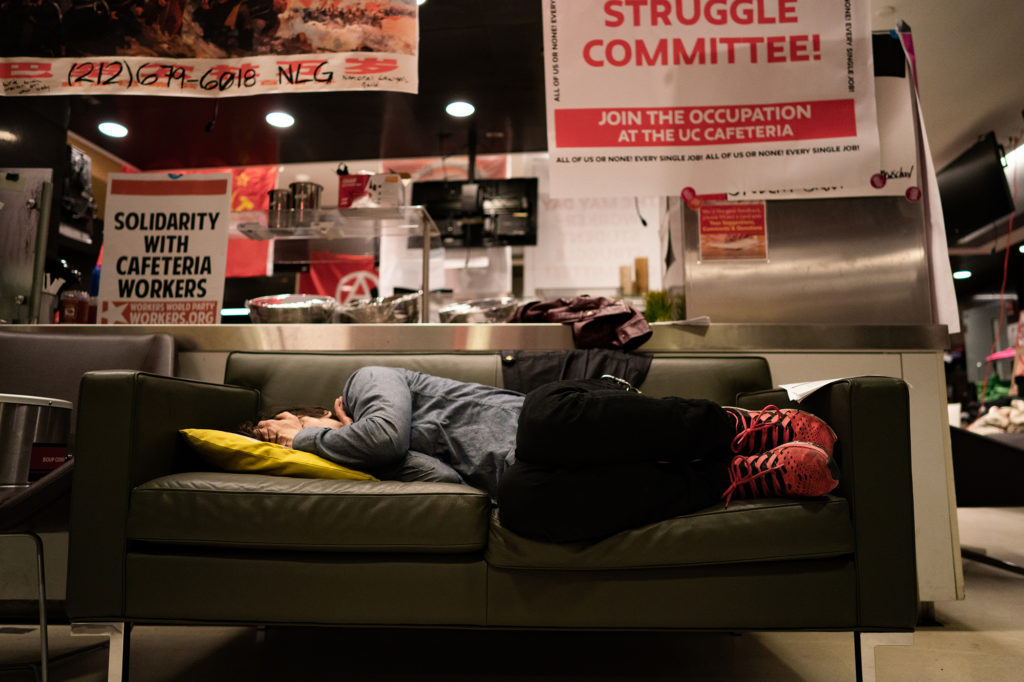 Photos: The view from inside the occupied New School cafeteria this May. Credit: Erin Sheridan.