Scholar and activist Mike Davis is best known for City of Quartz: Excavating the Future in Los Angeles, a noirish blend of sociology, geography, history and architectural criticism. But his first book, Prisoners of the American Dream, synthesized a generation’s worth of social history with Marxian political economy, producing an original understanding of the history of the American working class and the rise of neoliberalism. Thirty years after it was first published, it still brims with relevant insights.

The preview description of Davis’s new book said it would survey the politics emerging among slum dwellers in cities around the world. It would consider whether they might be the class to help point the world to a more sustainable and just system, while the Global War on Terror would be conceptualized by Davis as an effort to repress this class. A reinvigoration of Marxism would provide the conceptual armature for his work.

I was excited to hear that Davis was returning to Marxist analysis, but that is not what the book is actually about. Instead, Old Gods, New Enigmas consists of one major new essay — 150 pages on workers’ struggles and socialist parties between roughly 1848 and 1920 — and three previously published works, with a preface that attempts to tie them together and connect them to the original book project. It is hard not to suspect that Davis is having some trouble completing his original project, which would be both a sequel to his outstanding Planet of Slums from 2006 and an ambitious effort to offer a coherent, Marxist perspective on global political developments. If that book is ever completed, it would be a major event in the left-wing public sphere. Like everything Davis writes, Old Gods, New Enigmas is worth reading, but it doesn’t come close to answering the questions it poses in its preface.

In that preface, Davis describes his long interest in Karl Marx and his desire for a politically engaged Marxism, rather than the academic, almost scholastic version dominant in the United States. In particular, he applauds Marx’s focus on agency, and poses the question of whether people in slums, “the informal proletariat” of unorganized odd-job workers and small-time vendors, constitute “that most potent of Marxist historical talismans: ‘historical agency.’” 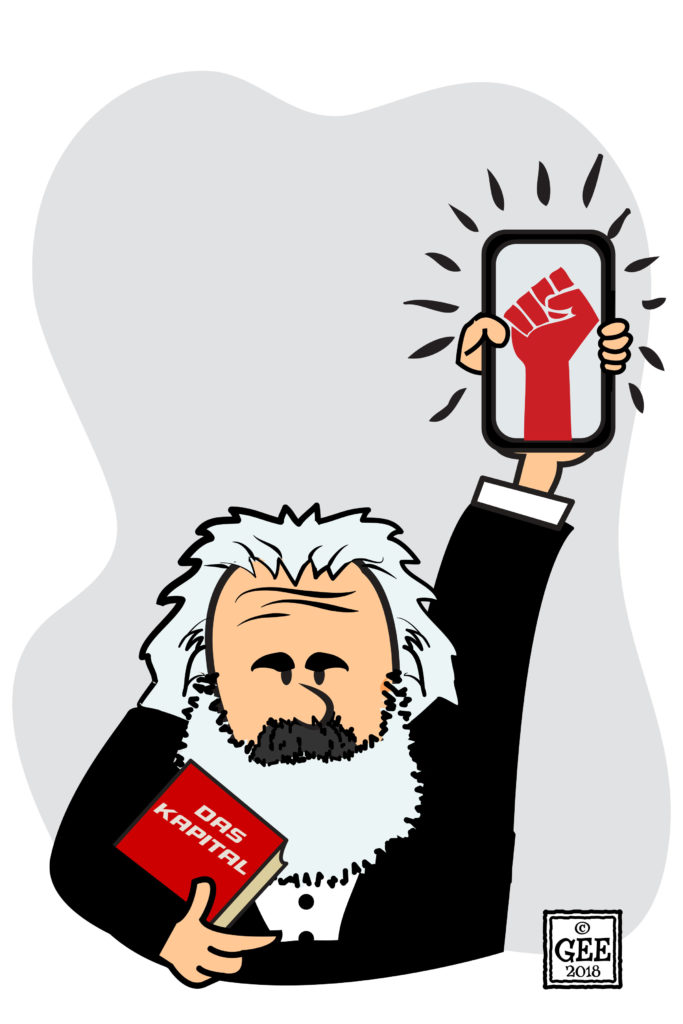 To answer this, he takes the circuitous route of exploring working-class history in the 70 years or so after Marx and Friedrich Engels wrote The Communist Manifesto, the period when the working class was acquiring the political and social capacities that led to the labor and socialist movements in Europe and the Americas. The resultant essay, “Old Gods, New Enigmas: Notes on Revolutionary Agency” is a fine read, racing through the transition from artisans to factory workers (and the kinds of struggle common to each); the emergence of socialist culture in city governments, neighborhoods and sports associations; the significance of mass strikes and workers councils; the subterranean forms that organizing takes, and more. It’s certainly recommended reading for the new generation curious about the history of socialism, although it overlaps a good deal with the work of Eric Hobsbawm.

But it can’t be said that it answers any questions about the revolutionary agency of workers. For starters, it ends too early to get a full sense of this class’s actual revolutionary history. Workers were the key agents in the Russian Revolution, but that success was not replicated elsewhere in Western Europe. And Soviet communism soon mutated into an authoritarian developmentalist state, a model very influential worldwide, but remote from the goal of workers controlling their own lives. After World War II, European socialist movements became doggedly reformist, not revolutionary, and eventually, communist parties did as well. These movements and those that emerged in newly industrialized nations like Brazil and South Korea helped secure important reforms and strengthen democracy, but their relationship to revolution became increasingly abstract.

In any case, what does this have to do with the planet of slums, where nothing like an international socialist culture has yet emerged, and the historical agents, the slum dwellers, are not concentrated in workplaces comparable to factories?

Davis also mostly ignores the questions of gender, racism and colonialism that are likely to haunt a reconstruction of the socialist project. In the preface, he claims that the re-emergence of religion at the end of the 19th century was an unanticipated development, specifically the European Catholic parties that won the votes of “proletarian mothers” in the 1910s and ’20s and again between the ’50s and ’70s, while socialists were largely ignoring the woman question, including in the practice of Karl Marx. This is perhaps the most original, provocative passage in the entire book, worthy of an essay of its own, but he doesn’t return to that line of thought.

The three previously published essays included don’t hold together particularly well. “Marx’s Lost Theory: The Politics of Nationalism in 1848” focuses on Marx’s writings about France in the 1840s and 1850s to make the point that historical understandings of nationalism should be integrated with political economic analysis, often of a sort that looks at fractions of classes rather than a polarization between proletariat and capital. The point is well taken, but apart from being about Marx, what does it have to do with the focus of the book? Much the same can be said of his examination of the climate change theories of the Russian anarchist Prince Piotr Kropotkin, “The Coming Desert: Kropotkin, Mars, and the Pulse of Asia.”

But the last of these essays, “Who Will Build the Ark?” is essential reading. It is structured as a debate between Davis’s pessimistic self, fearful that it is too late to stop climate change, and his optimistic self, who believes that remaking the world economy to be environmentally sustainable is the main political project of our time. While he believes suburban development is unsustainable on a global scale, cities can be remade “giving a priority to public affluence over private wealth” and creating an ecologically sound lifestyle. This sounds like a socialism worth fighting for, and one that points back to the agency of people who live in slums, who are most likely to bear the brunt of climate change and whose well-being has never been secured. It is a line of thought worthy of much more elaboration.

Old Gods, New Enigmas feels like one of the albums of B-sides, alternate takes, and rarities that musicians produce when they are between major projects, rather than a coherently conceived work. Davis is an important enough thinker that it is worth reading. But I hope he completes the book originally described soon. We need it.