The Indypendent
Menu
A Free Paper for Free People
Credit: May S. Young.

Donald Trump Jr. wants his hair back — but that’s not why we are writing. You can keep the Gordon Gekko oil slick on top of your scalp for all we care. We would, however, like our newspaper dispenser returned.

On Tuesday we learned that our news box near Journal Square was missing. Soon we discovered the following tweet sent on Monday, accompanied by a photo of dozens of newspaper boxes:

For #JerseyCity residents: We continue to remove these from the streets as many are non functioning, they clutter the sidewalks, and many just become trash cans. We have 240 so far w/more to do. If we accidentally took one that has permits to be there please reach out to DPW.

For #JerseyCity residents: We continue to remove these from the streets as many are non functioning, they clutter the sidewalks, and many just become trash cans. We have 240 so far w/more to do. If we accidentally took one that has permits to be there please reach out to DPW pic.twitter.com/ecfVn4L4rn

Here’s the thing, your city isn’t issuing permits for news boxes. We called the Department of Public Works (DPW) Wednesday morning. They transferred us to the Sanitation Department. The person on the other line, was apologetic. “We had no way of contacting you,” she said, apparently unaware that all of our news boxes have our phone number, mailing address and social media handles displayed prominently in at least three locations on their exterior.

Sign The Indypendent’s petition demanding Steven Fulop respect the First Amendment and return the news to the streets of Jersey City.

“Would you like your box back?” she asked, “because you can come pick it up.” There was a note of desperation in her voice, of pleading. Perhaps she was overwhelmed by all the newspaper dispensers piling up in her charge. Yet she had no idea what permits you were referring to.

We would like the news box back, we explained, but first we needed to know what regulations we are supposed to follow so that the box won’t get picked up again.

Usually, in a democracy, Steve, laws are approved by elected representatives and then enforced.

Thirty minutes later we received a callback from another city employee who told us to call the Division of Engineering, Traffic and Transportation (DETT), that it was their job to regulate the news boxes. After being passed around multiple times we reached a gentleman over there who told us the news boxes were DPW’s problem.

“It has absolutely nothing to do with Traffic,” he informed us, adding that he was pissed. “I wasted half a Saturday trying to get a copy of Especialito for my girlfriend’s mother,” he said. “She loves that thing.”

You see, Steve, some Jersey City residents really do make use of the news boxes that you decided to arbitrarily sweep up. Another such person is Erik Anders-Nilsson — a participant in The Indypendent’s Adopt-a-Box program, in which volunteers monitor news boxes in their neighborhoods and make sure they are kept clean. That ostensibly was the reason for your round-up, wasn’t it? 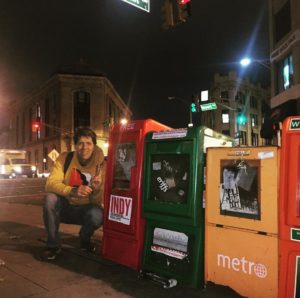 “Jersey City is going through rapid gentrification as people are pushed out of places like Brooklyn and come here,” Erik told us last month, describing why he helps make sure our news box is tidy. “The issues The Indy covers are just as relevant in our community [as in New York City].”

Erik and his friends were carrying bundles of The Indy to fill our Jersey City news box on Tuesday afternoon but when they arrived at the Five Corners Library they realized it was gone. Not only was The Indy box missing but so were AM New York, Metro, the home and auto listings and the Spanish-language newspapers. “I’ve never seen anything like this,” Erik, who has lived in Jersey City since 1994, said in a follow-up interview this week, describing streets stripped of news.

Some of the news boxes were eyesores, said local City Councilmember Michael Yun, but that isn’t an excuse to remove all of them. “It’s about freedom of the press,” he said. For his constituents, many of whom are immigrants or live in low-income housing, “those free papers are one way to get information about the government and the character of their neighbors.” He suggested that the newspaper purge was a publicity stunt.

Well, that’s one way to get the press’s attention, Steve, stealing our property.

“How are they going to issue permits, based on what?” Councilmember Yun wondered allowed, pledging to raise the issue at the next Jersey City Council caucus meeting on June 13.

After some more phone calls on Wednesday we got back in touch with our contact at Sanitation. She seemed to have more of a grip on the situation by then, citing administrative code 287, which governs solid waste.

So is there an application to fill out to obtain a permit we asked? “No,” she said. Is there any permitting process at all? “We’re working on it,” she said.

Usually, in a democracy, Steve, laws are approved by elected representatives and then enforced. Not the other way around. On two occasions the Supreme Court has ruled that the distribution of printed materials through news boxes in public places is protected under the First Amendment, by the way: City of Lakewood v. Plain Dealer Publishing Co.,Cincinnati v. Discovery Network, Inc.. You, Mr. Fulop, are not the sole arbiter of what is garbage and what is not.

Ironically, a number respondents to your tweet called for repurposing the “trash cans” you have stolen for artistic purposes. “What are you doing with all of them?,” wrote @AudioDocs. “I’m imagining some kind of public art project.” “Please find a way to repurpose them,” commented @herzogpilgri. “Reach out to the Arts community. They have a way of making something great out of almost anything.”

Another commenter thanked you and called for going a step further. “Can we also clean up sandwich board clutter at crosswalks?” asked @JCVillageMom.

But while it is tempting to take sidewalk fascists like you lightly, we know from experience here in New York that calls for cleaner streets are often coded appeals for the kind of gentrification Erik Anders-Nilsson and many of your working-class immigrant constituents are concerned about. While impinging on the First Amendment might gratify real estate developers who want sterile streets for sterile yuppies to look down upon from sterile luxury towers, it is a slippery slope.

If you could kindly please place The Indypendent’s dispenser back outside the Five Corners Library where you found it, we would very much appreciate it. And kindly don’t mess with it again. We are happy to comply with whatever regulations you and the City Council see fit, provided that they are reasonable. But come up with some first. Our boxes are fully insured, in case that makes a difference. In fact, our coverage extends not only across the Hudson River to New Jersey but to nearly all locations in the world — at least in nearly every spot where freedom of speech exists. We assume that includes Jersey City but maybe not.

The mayor’s office did not return multiple requests for comment.

Join The Indypendent and local grassroots groups defending freedom of speech for a rally and press conference at 5 p.m on Wednesday, June 13 at Jersey City Hall, 280 Grove Street.