Indypendent Associate Editor Peter Rugh was arrested in Jersey City on Wednesday evening for disrupting a City Council meeting. Three other Indy staffers were also removed by police from the City Council chambers for similar actions. The four journalists were protesting Jersey City Mayor Steve Fulop’s decision to purge the streets of all news dispensers and their contents.

“If you’re going to take our news boxes, you might as well take me too,” said Rugh. “Without the right to distribute our newspaper there’s no freedom of speech in this town.” 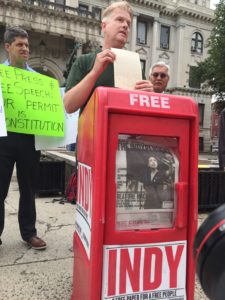 At least 240 news dispensers were confiscated as of June 4, including those belonging to The Indy, El Especialito, am New York and Metro. No prior notice was provided to publishers by the city either before or after the news boxes were impounded. In a maneuver that might have been lifted from Donald Trump’s playbook, Mayor Fulop announced he was ridding the news from the streets on Twitter. The mayor apologized if he confiscated permitted boxes but, as The Indy reported, and both Gothamist-WNYC and the Jersey Journal confirmed, there is no permitting process in place.

Two City Council members, Michael Yun and Richard Boggiano, also expressed support for the return of the news dispensers to the street during a press conference held before the Council meeting.

Rugh was cited for disorderly conduct and subsequently released from the East District police station on his own recognizance. Other members of The Indy staff were hustled out of the City Council meeting for loudly demanding the immediate return of all confiscated newsboxes—John Tarleton, editor-in-chief; Ellen Davidson, contributing editor; Dean Patterson, news and culture contributor.

In addition to Wednesday’s protest, The Indy has launched a change.org petition calling for the return of the news dispensers. The newspaper’s staff, volunteers, readers and supporters of the newspaper have vowed to keep up the pressure on Steven Fulop and his allies on the City Council until the First Amendment is restored in Jersey City.