The Indypendent has placed scores of outdoor news boxes across the city since the fall of 2016. Our circulation has jumped to 45,000 papers a month. None of this would be possible without the help of volunteers who maintain our boxes and find new venues where the paper can be shared. Here are some of the first-person stories of the volunteers helping us build a grassroots media revolution. 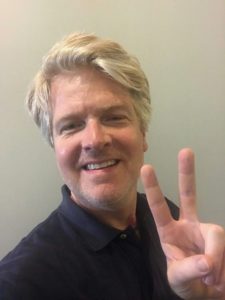 I’m an actor and a short film director. I became an activist during the run-up to the first Gulf War in 1990-91. I was working as a hotel supervisor and would put out flyers for anti-war protests in the employee break room. One day I was called into my boss’s office and she told me I was being fired because of the flyers. No warning, nothing. Maybe I was naïve but I couldn’t believe it. But in the end it made me stronger.

I helped found the Jersey City Peace Movement in 2003. We’re opposed to all wars, racism and injustice, and we provide aid and friendship to the homeless as well. Getting a factual, alternative view of current events into people’s hands is also a part of our work. I come into the city a couple of times a month with three buddies of mine to carry copies of The Indy to a street box in Jersey City in an extra-large suitcase with rollers that can hold 400-500 papers. We wheel it down the stairs to the PATH train one step at a time.

We have a box outside the Five Corners Library near Journal Square. We also take the paper to other libraries and mom-and-pop stores where it is welcome. Jersey City is going through rapid gentrification as people are pushed out of places like Brooklyn and come here. The issues The Indy covers are just as relevant in our community. If there are any Indy supporters who drive regularly between New York and Jersey City who would like to help us, we could move a lot more papers than we already are. 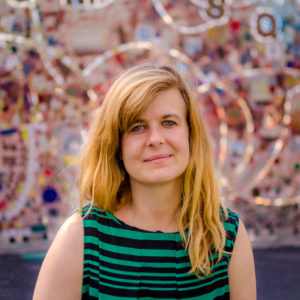 I am the Director of the Sane Energy Project, a grassroots environmental organization that has helped lead the fight against fracking and destructive fossil fuel projects in New York in recent years. In social justice organizing we talk about not siloing our work. But sometimes it’s inevitable when you are working hard on campaigns. Being able to read all the articles in The Indy is an easy way to have a birds-eye view of the movement and understand how our issues overlap and how we can elevate each other’s work.

I take care of The Indy box at the Morgan Avenue stop on the L train. The neighborhood has changed dramatically since I arrived in 2004. The warehouse spaces that used to house old knitting factories have transitioned into artists’ lofts. Gentrification has sped up and brought many young people who seem oblivious to the world around them. Having the box right in front of the subway station allows commuters to grab a paper before they board the train in the morning.

Unlike the other free morning newspapers, what they are getting is not sensationalism or headlines with hollowed-out news updates but real stories, thoughtfully written, about what’s happening in our city — with national and global implications. With our newer neighbors, I’m glad they have a chance to be exposed to The Indy’s coverage of gentrification and police brutality. 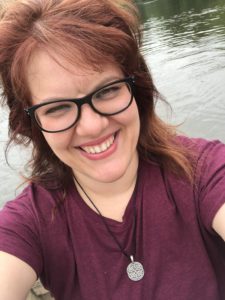 I love box watching! Whenever friends come over, I show them my shiny red Indy box on 9th Avenue across the street from the apartment complex I live in. They get a kick out of it.

I first came across The Indy in college in the mid-2000s at Iraq War protests and later I did some photography and theater coverage for the paper. I am the co-founder and director of Co-Op Theatre East, an ensemble of actors, playwrights and directors that use theater to grapple with socio-political issues. I’m also working on a PhD in performance at the CUNY Graduate Center.

There’s an intersection between what I do and what The Indy does. It’s all storytelling. Independent media allows us to see what is going on in our communities and in the world through the eyes of people who don’t dominate the media narrative but who are affected by policies that are implemented in their name.

The people who pick up papers at my box are a mix of Theater District workers and tourists. It offers them a glimpse of those whose stories should be told. Looking after the box and keeping it neat and orderly with a display copy in the window isn’t a huge commitment. I take pride in doing my small part to bring independent media to my community. 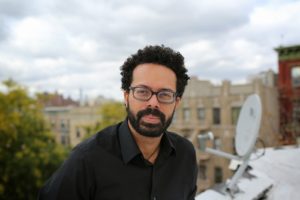 When I take papers out of the box I watch over and bring them to cafes or laundromats it’s like Christmas time.

The Indy is a magnet for thoughtful people who want to keep up on progressive thought without being guilted or yelled at. When I sit in my favorite cafe, writing an article, I feel a warm glow right in my belly button as my neighbors sip coffee and turn The Indy’s pages.

All those stories, read and remembered become a shared language. The paper unites the men watching basketball in the barber shop with the hipsters at the Korean cafe with the locals at the bodegas and the laundromats with the sisters getting their hair straightened at the Dominican beauty salon. All the patrons of the places where The Indy is at.

The Indy says over and over, “You deserve more” and “you create the world.” That affirmation descends like a star into the depths where hope is buried.

Behind the eyes, inside silences; hope becomes explosive. In some unexpected way, on some unpredicted day, the people will come out of their barber shops and cafes and beauty salons and laundromats and say, we are going to write our own story today.