Republican senators can scold Trump for lip syncing Vladimir Putin’s lies but their base won’t give a damn. MAGA hat wearing men don’t see treason or collusion. They see Trump and Putin as a defiant spectacle of the world’s two manliest men, gripping hands like mafia dons making a deal.

How did we get to a place in American history where angry, white, conservative men would shrug off an F.B.I.’s report on Russian cyber-attacks in the 2016 election? Russian agents are villains in Hollywood films from Red Dawn to Rocky 4 to Miracle. They should know better. They don’t because they are reacting to their cultural impotence.

Red State America’s fear of obsolescence makes it an eager audience for false protection sold by demagogues like Trump. His coalition is one-third poor, two thirds affluent. It’s white, older and Bible-thumping. It’s angry and scared at wage stagnation and their place in the New America. But even as he promises them a wall, he’s digging their grave.

This Ain’t Your Daddy’s Racism

August 11, 2017, eighteen years later, Nazis paraded with blazing tiki torches, chanting, “Jews will not replace us.” The next day, one of them rams a car into a crowd of counter-protesters, smashing Heather Hayer’s skull and killing her.

Only violence seemed to guarantee safety. One can look back and see from colonial America to the Civil Rights Movement it has been a golden era of whiteness. They had the guns and law to justify killing. Slave rebellions were put down. Native people herded off land. Jim Crow kept their neighborhoods monochromatic. The high point was post-World War II when America bleached the traces of its old world ethnicity in safe, leafy suburbs.

Now that fear has returned. Maybe because none of this violence really protected whiteness. Not even from itself. Two world wars left the West and its ideal of racial purity buried in smoking rubble. After the Holocaust and the Civil Rights Movement; the moral confidence of white supremacy broke. Racial integration picked up speed. Immigration quotas were repealed. Popular culture was more openly mixed.

For some in the white majority, the change was welcome. For many, it stirred toxic anxiety that needed a new public expression. So the Republican Party did for racism what money launderers do for drug dealers’ cash, they washed it clean enough to use.

They weren’t though. For affluent Republican voters, capitalism’s voracious appetite for culture to commodify meant every pulse of resistance found its way onto store shelves and sitcoms and music.

And for the one-third of Trump voters who are working-poor, capitalism automated jobs, it searched for low-wage workers, it moved factories and gave executives huge salaries that split the nation by a vast wealth gap. And it hit men’s egos, hard. Now they were underemployed and becoming a minority.

“We will build a great wall on our southern border,” Trump yelled to cheering fans in 2017. In 2014, a few years earlier, Putin annexed Crimea, then bragged how the “residents of Crimea … turned to Russia for help in defending their rights and lives.” Putin’s poll numbers shot through the roof.

Two men, thousands of miles apart, expressed the sentiments of the age. Walls. Ethnic nationalism. Homophobia. Sexism. They swore to defend their people against outsiders and reassert a lost national “strength.” The Cold War era divide between East and West is collapsing for the conservative base into the divide between who is strong enough to protect them from the criminal, the immigrant, the pervert versus who can’t or won’t.

Before the 2016 election, Fox News commentators and senior Republicans drooled over Putin’s shirtless machismo. “Putin decides what he wants to do and does it within half a day!” said former New York mayor Rudy Giuliani. In contrast to what it saw as an over-intellectual, feminine Obama, the right wanted a gangster president, someone to secure entitlements while also expressing their newfound victimhood. 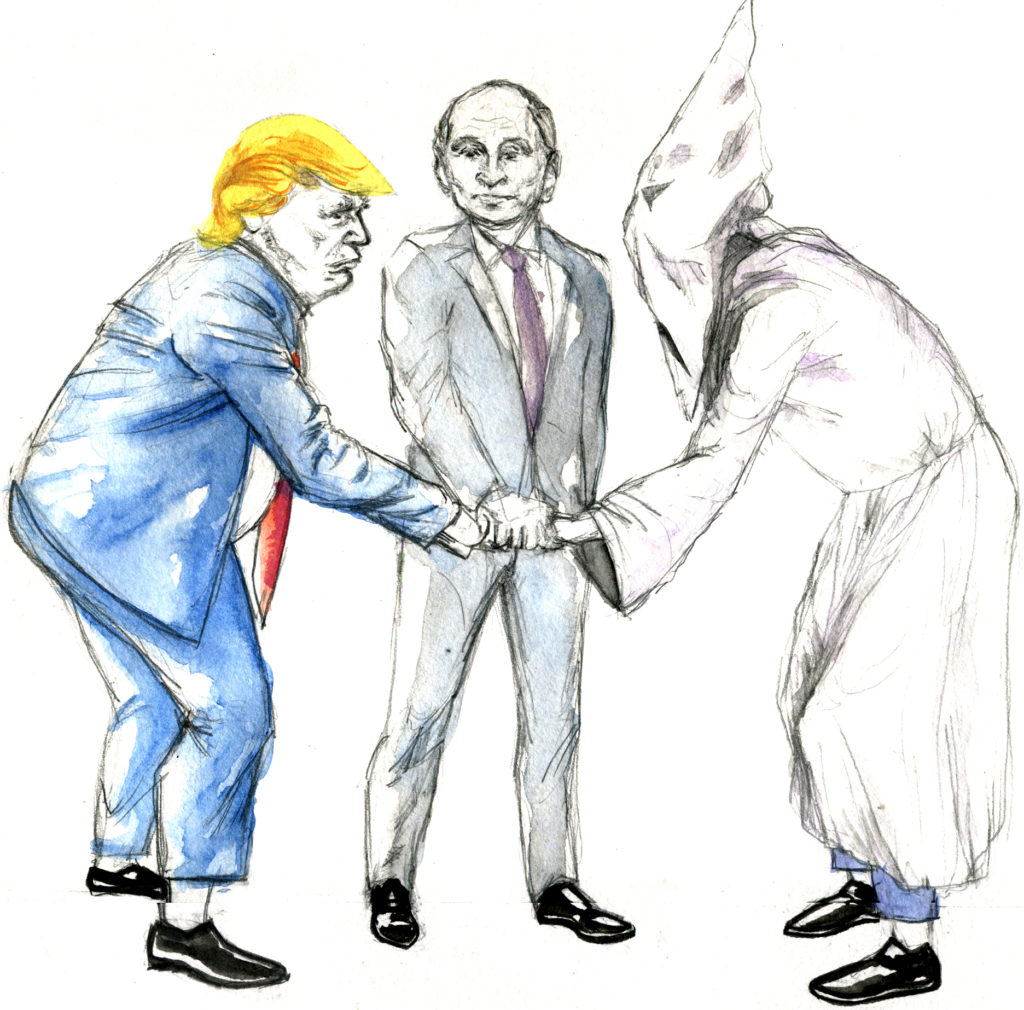 Not just in America but everywhere it seems conservatives are lifting nationalist parties toward power. In France, it’s Le Pen. In Germany, it’s the Alternative for Germany. In the Philippines, it’s Robert Duterte. And for Britain, it’s the hardline Brexit bloc.

In this new frame, loutish behavior is not a liability but a stamp of authenticity. Putin’s joking about Russian prostitutes is fine. Duterte’s bragging of mass murder? No problem. Boris Johnson’s messy mop of hair and crude bigotry? Perfect. Trump’s every lie and insult is proof, well, he’s the real deal.

The gangster president it the avatar for an insecure, conservative, white masculinity in the West that looks to the future and finds less and less space for itself. Political elites of both Democrat and Republican parties have expressed vexation over the Trump-Putin summit in Helsinki but Trump’s base has already warmed up to Putin, seeing in him a mirror of Trump.

What is to be done with all these angry white guys? How is a durable, American progressive movement going to take hold? Do we write them off and go for the emerging, minority-majority? What’s at stake?

Everything is at stake. When the international ruling class spins the roulette wheel of casino capitalism, the earth is the little ball thrown into the game. The planet is dying. Deserts grow. Storms destroy towns. The oceans are acidic and choked with plastic. Climate Change creates desperate people who search for work, housing and food. They run smack into physical and ideological walls, built by strongman presidents, who scare voters with images of immigrants “infesting” the nation.

The rising tide of democratic socialists in the United States have the answer but not the message. Whether it is Sen. Bernie Sanders or newcomer, New York City’s Alexandria Ocasio-Cortez, the checklist of policies is clear. Medicare for all. A federal jobs guarantee. Immigration justice. Women’s rights. It goes on. It’s all there. Except for the angry white guys.

In a time of defensive whiteness, it is easy for us on the left to be snarky or contemptuous or dismissive of the angry whites. We’re still a little scared. We’re scared of repeating their bigotry, so we tiptoe around historical grievances to the point of reflexive defensiveness.

Angry white guys voted for blustery even buffoonish, authoritarian leaders to return themselves to a mythical past where they had a prized role. The left has to offer them a future where they have a role. No. Not the whiteness of yore. Not the toxic, Rambo manhood. So much of that was based on fear anyway. Nor can it be a “welfare narrative,” where they are wards of the state with no agency, no future but to live on a universal basic income. Liberal sympathy feels like pity. The alternative has to be narrative frame that replaces white fear with solidarity.

They need to see those old Uncle Sam “I want you” posters in their barber shops and on billboards. Except instead of a call for war, it’ll be a call to work. Maybe it’s bolting down solar panels or fixing wind turbines or steering a ship that claws the plastic from the sea. They need to feel wanted in the left as co-creators of a sustainable civilization.

If so, maybe a decade or so from now their sons and daughters will look at old newsreels of Trump glad-handing Putin and say in Spanish, “Nunca más.”