It’s Saturday night inside a Knights of Columbus event hall in Ridgefield Park, New Jersey and The Dagger Mik Drake is here to wrestle. Variously colored paper streamers and fishing line — decorations from parties past — dangle from the ceiling. In the center of the room, a freshly assembled 15-square-foot wrestling ring quietly waits to be relevant. The black fiber ropes that surround it are taut, ready for performers to cling to them as if for their very lives.

Around the room devotees clump together, wearing T-shirts supporting The Ugly Ducklings, The Fraternity, Danny Moff — some of the crowd’s favorites. A concession booth does business in one corner of the hall. Its menu, scrawled in a sidewinding hand, offers potato chips, pretzels and pink hot dogs served on Bunny Bread buns. A man with a goatee changes seats a few times and eventually settles on a spot that will later force him to whisk his small son out of the aerial path of what may be an Abercrombie and Fitch model in bright purple spandex. The Pabst Blue Ribbon knocked over in the process only adds to the excitement.

Some fans have zealously followed the melodrama of the Battle Club Pro league and its earlier incarnations for decades. They cheer and boo the cultural descendants of circus folk and competitive brawlers that created America’s unique pastime of “sports entertainment.” The rest of us are just catching up.

When the The Dagger takes the ring for his part in a three-way free-for-all, he sports only gold lamé briefs and matching knee pads above his shiny white boots. After every dropkick, he falls as a horizontal line — his body just faster than his mane of tight-curled hair, which drops like a Cousin Itt over muscles regularly treated with L’Oréal Sublime Bronzer. His entire 246-pound body slams against one inch of foam padding above a bed of two-by-twelve wooden planks spanning structural iron trusses. He continues wrestling through a bloody nose.

“Am I screwin’ up by not going down the, you know, General Life 101 path?” The Dagger, who has been wrestling for twelve years and working as a lawyer for nine, muses later. Yet such doubts pass quickly. His environmental law job in Manhattan serves only as a safety net, something to support him until he makes it to the big time: World Wrestling Entertainment, Inc., the WWE.

Modern professional wrestling began to coalesce in America when the Civil War forced men of different backgrounds into military camps around the country. The bivouac tedium punctuated by hunger, disease, death and gambling led to the competitions and, in effect, the melding of fighting styles. Thus met the tripping maneuvers of the Vermonters, the free-for-all and its nasty, Western Frontier rough-and-tumble cousin, the classical Greco-Roman, the innovative Cornish side-hold, the gentlemanly antebellum upright and the Irish collar-and-elbow.

‘The best character is the one that is yourself, but with the volume turned up.’

As the initial democratic system of fighters competing essentially at random failed to draw audiences, a need for larger-than-life characters arose. Showmanship, more than ability, sold seats. That could mean having an enormous or deformed physical presence, charisma to rival Casanova or enough Bible recall to impress the masses. And what’s a hero without a villain? Beginning in the 1880s, as wrestling evolved from the traveling carnival scene, promoters discovered melodramatic feuds were the most dependable way to sell tickets. Of those narratives, the most marketable was whatever form of xenophobia was in vogue at the time. Racism worked, too.

This model, a century later, led to creations like The Iron Sheik in 1980 — just months after the Iranian hostage crisis — and his nemesis, Sergeant Slaughter, a balding cross between Smokey the Bear and the drill instructor from Full Metal Jacket. The Sheik was a popular love-to-hate heel, directed to stir up anti-Iranian sentiment. During a 1984 match between the two rivals in Madison Square Garden, patriotic chants of U-S-A! U-S-A! erupted throughout the venue. Twenty-nine years later, in that same arena, Donald Trump was inducted into the pro-wrestling Hall of Fame, smiling amid a torrent of boos. Five years after that, the same U-S-A chant that once greeted Sergeant Slaughter rang through the halls of Congress during Trump’s first State of the Union address.

To date, the current lonely behemoth in televised wrestling, WWE, still builds characters up just to tear them down. The Mexicools ride to matches on lawnmowers while Cryme Tyme, two black guys who steal stuff from other wrestlers, exist to “parody racial stereotypes,” according to their website. But such parodies exist because there is a market for them, a market exploited by Trump when he carved a path to the White House by describing Mexican immigrants as murderers and rapists and tweeting out fake black-on-white crime statistics.

“The best character is the one that is yourself, but with the volume turned up,” Mik Drake explains with hard-earned wrestling-world wisdom.

There’s a word for this: Kayfabe. It defines wrestling’s brand of suspension of disbelief, the protection of both melodramatic narratives and the physical moves that create the fighting illusion.

In the early days, Kayfabe was the carnival worker’s code word for when a mark, a member of the crowd, was nearby, warning off-duty wrestlers to hop back into character. There are numerous theories regarding the word’s origin. Some suggest it is a portmanteau homage to Kay Fabian, a mythical old-time wrestler who may or may not have ever existed. Another theory states the term derives from the British phrase “keep cavey,” or be on the lookout. Regardless of its origin, the code survived through a century of American wrestling’s ups and downs, its vagabond circus days, the meager turnouts through the Great Depression, the subsequent post-war Golden Age, the televised oversaturation that led to the sport’s decline in the 1960s and early ’70s and its rebirth when the WWE began to monopolize the national market in the following decade.

During the Vietnam era, when America watched its children being slaughtered in the jungles of Vietnam (and alternately doing the slaughtering), wrestling performers and fans began the sustained wink that carries through to today. The intention behind Kayfabe morphed from protecting industry secrets into a tacit agreement between audience and performer that artifice spawned from even the smallest kernel of truth is more entertaining than reality. The public’s appetite for a story grew with its ability to bite into it. Superstar Hulk Hogan, for instance, boasts a ten-inch penis, yet the man who portrays him, Terry Bollea, has conceded his endowment is more modest in nature.

With everyone in on the game, pointing out non-sequiturs and logical plot holes equates to narrative murder. In the wrestling universe, individuals have gone to extreme lengths to protect kayfabe. Take, for instance, Nelson Scott Simpson’s years-long dedication to his character “The Russian Nightmare,” Nikita Koloff, that involved legally changing his name and hiring an “interpreter” to translate his remarks when he spoke in public. (Simpson was born in Minnesota.)

Yet, while parallels abound between wrestling and politics, one defines itself as entertainment and the other currently only acts as such. Fans of wrestling are lawyers, journalists, police officers — citizens on all sides of the political spectrum. They are fans because it’s fun and harmless entertainment. But things get murkier when we begin treating entertainment as real and the real as a imaginary. In this moment, when people yell until they feel things are true, swapping truth for kayfabe passion, it is easy for the real to be obscured behind spectacle.

The Dagger Mik Drake wears a suit to work at his environmental law firm where he writes legal briefs on a computer that runs on a buggy version of Microsoft Windows. In the office, none of The Dagger’s coworkers know about his double life. He keeps it secret to avoid the headache of questions he’s faced before when word of his other identity spread around previous office water coolers: Hey, so where do you get the little outfits? How do those boots feel? So when am I going to see you on TV? 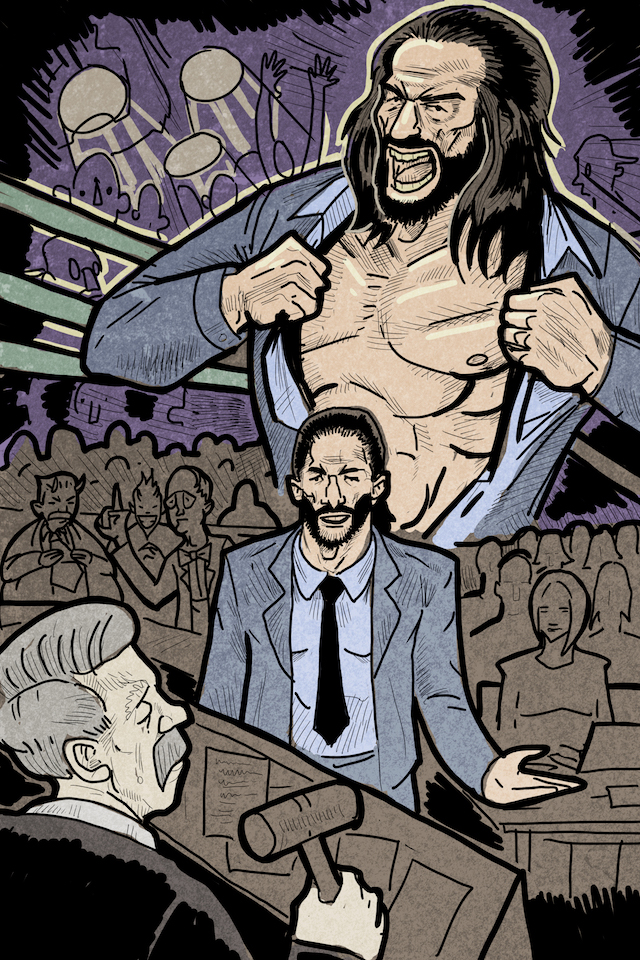 He compares his love of wrestling to his colleagues’ weekend hobbies like acting, playing soccer, writing poems. “It just so happens that this one involves me in my underpants, jumping around and fake fighting other grown men,” he says.

However, as far as The Dagger sees it, no one else at the office aspires to be on Broadway, win the World Cup or a Nobel prize for Literature — not in the way he wants to be a professional wrestler. He recently turned down a promotion at work so he could keep up with his workouts and the related cryotherapy and sports massages he undergoes to stay in shape.

When The Dagger enters Trader Joe’s in Manhattan he makes a b-line for the frozen grass-fed beef burgers and jasmine white rice, ignoring creative displays aimed at those with a desire for flavor before fuel. His daily intake — with the exception of a post-workout protein shake — consists of 800 grams of rice and 400 grams of cut-up patties. The Dagger rarely goes out on dates and never drinks alcohol. He is cultivating his inner wrestling self — uber-competitive, “almost to a sociopathic level,” he says.

After the Battle Club Pro match, The Dagger arrives home to his tiny, shared apartment in Manhattan. He turns on the TV and reviews tape of his performance so he can get better and eventually go pro. He’s been in talks with the WWE but nothing has been inked yet. It’s only a matter of time, he believes. If not the WWE, perhaps he can make it big in the All Japan Pro Wrestling league. “Wrestling is unlike other sports,” he says. “You tend to peak later, 35 to 40, think back to, like, Hulk Hogan.”

The Dagger eventually lies down on the futon he uses for a bed in the living room that doubles as a kitchen. The room around him is sparse, its white walls mostly barren. A poster of Rocky Balboa triumphantly raising his fist in the air hangs across the room from his bed. This is a place of transition — why would The Dagger spend time decorating when he could be leaving for Florida or Tokyo or Los Angeles any day now?

If asked about the bruises and cuts on his face at the office on Monday, he has a go-to response ready. “I’m in a fight club, like in the movie, but I can’t talk about it,” he’ll say, then add with a laugh, “It’s from pickup basketball.” He is happy to let them choose the truth that suits them.

This is reader supported news. Make a contribution today!