When New York progressives woke up on Nov. 9, 2016 to the smoking rubble of Hillary Clinton’s defeat at the hands of Donald Trump and began to look around for ways to resist full Republican control in Washington, DC, they noticed a funny thing: in their sleepy state capital of Albany, a Republican minority exercised a virtual veto over legislation in one of the most liberal states in the country. They accomplished this feat with the help of a rogue group of Democratic state senators and the blessing of New York’s two-term governor.

The Independent Democratic Conference (IDC) was formed in 2011 just as the Republicans majority that had controlled the state Senate for a half-century was on the verge of losing its grip on power. The IDC was initially composed of four rogue Democratic senators and eventually grew to eight. Cementing Republican control was a Faustian bargain, but it came with its perks. And given the advantages of incumbency and how little attention New York voters usually pay to state politics, it must have seemed like it could go on forever. 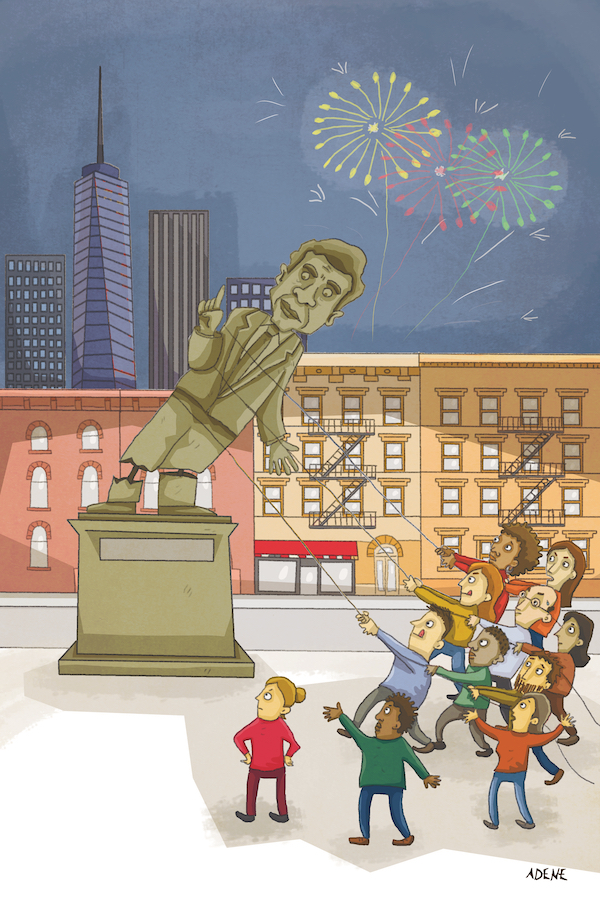 But now we’re in a different moment where a slew of candidates from the top of the ballot on down are targeting machine incumbents with people-powered campaigns that rely on small-dollar donations and volunteer-driven voter outreach instead of large sums of corporate cash and a barrage of television ads and glossy mailers. Here are some of the key Democratic primary races that will be on the ballot on September 13. 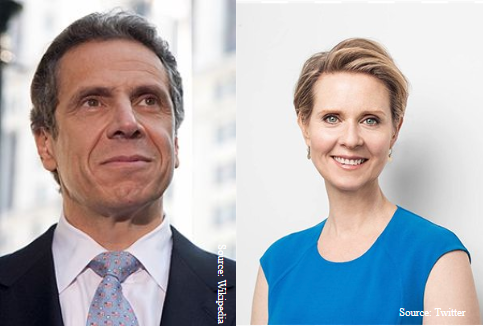 It’s experience of the most unseemly sort vs. an unabashedly left-wing agenda in the governor’s race. Andrew Cuomo describes himself as a progressive who gets things done and points to victories on gay marriage, an expanded minimum wage and a first-in-the-nation ban on fracking during his first two terms — accomplishments that required years of protest before the governor adopted positions he had previously spurned.

During the same two terms, Cuomo has handed over much of the state regulatory apparatus to his pay-to-play campaign contributors, presided over the unraveling of the MTA and starved local governments across the state of needed funds. His opponent — award-winning actor and education activist Cynthia Nixon — is taking no money from corporate political action committees (PACs) or limited liability corporations (LLCs). She is calling for universal rent control, Medicare-for-All, marijuana legalization, reinvesting in the subway system and was recently endorsed by the Democratic Socialists of America. 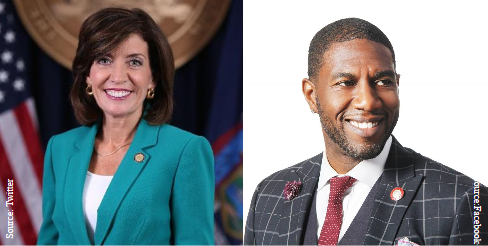 Lieutenant governors have traditionally been non-entities who wait in the wings in case their boss is felled by scandal or worse. The current incumbent is a former congresswoman from  Buffalo named Kathy Hochul. She is being challenged by Jumaane Williams, a Brooklyn City Councilmember who has vowed to remake the office as a center of advocacy and agitation on behalf of New Yorkers whose voices are ignored by other state officeholders.

When two-term Attorney General Eric Schneiderman resigned due to a #MeToo scandal in early May, the race was on to succeed him. Three of the four contenders — Leecia Eve, Letitia James and Zephyr Teachout — are women. Eve, a former Cuomo and Hillary Clinton aide, is little-known outside her native Buffalo. James, the popular New York City Public Advocate, was tapped by Cuomo to be the Democratic Party’s official candidate and has already reaped the benefits with hundreds of thousands of dollars in corporate PAC and real estate money flowing into her campaign coffers. Teachout, a law professor who wrote a well-received book on the history of corruption in America, is rejecting all corporate contributions in favor of an insurgent grassroots campaign. As of mid-July, she had raised $550,000, of which 97 percent came from donations of less than $200. Upstate Congressman Sean Patrick Maloney is the fourth candidate in the race.

Representing a district that includes wealthy, white bedroom communities like Riverdale and Pelham, as well the racially-mixed, working-class East Bronx, Jeff Klein has taken hundreds of thousands of dollars from the real estate industry and other corporate special interests since his Senate tenure began in 2005. After launching the IDC in 2011, he has helped ensure that the Senate is a swamp where progressive legislation — tenant protections against soaring rents, universal health care, the codification of Roe v. Wade into state law — goes to die. Among the recent bills Klein helped kill at the end of the legislative session this June, a government ethics reform package. Klein has resisted calls to resign since January when a former staffer accused him of shoving his tongue down her throat.

His opponent, Alessandra Biaggi, is no stranger to big politics herself. She’s a former Cuomo staffer, ran national operations for Hillary Clinton’s 2016 presidential run and is the granddaughter of the late Congressman Mario Biaggi, who represented the Bronx for nearly two decades. Biaggi is running on a platform that includes single-payer health care and ending loopholes that allow landlords to hike rents on regulated apartments.

Former three-term New York City Councilmember Robert Jackson is taking on IDC-member Marisol Alcantara for her uptown Senate seat. Prior to his time on the Council, Jackson led the Campaign for Fiscal Equity as a parent activist and school board member. In 1993, the organization filed a lawsuit against the State of New York, which more than a decade later agreed to disperse $5.6 billion annually to long-underfunded schools over a four-year period. The state legislature froze the funds, however, following the 2008 financial crisis and much of the money has yet to be distributed.

Jackson narrowly lost a three-way race to Alcantara in 2016 when she ran as a progressive and attended the Democratic National Convention as a Bernie Sanders delegate. Alcantara has sponsored a number of pieces of tenant protection legislation, none of which have been brought to the floor, because the Senate is controlled by Republicans with IDC’s backing. Confronted by the fact that her political alignments were preventing legislation she supposedly supports from passing, Alcantara, speaking with City Limits in February, blamed Simcha Felder, another breakaway Democrat who, however, is not an IDC member.

Shortly after he was elected as a Democrat in 2012, incumbent Simcha Felder announced he would caucus with Republicans. A former City Councilmember who represents the conservative, orthodox Jewish neighborhoods of Midwood and Borough Park, Felder cast the lone Democratic vote against New York’s $15-an-hour minimum wage bill and, three years running, has played a pivotal role in killing the state’s DREAM Act, which would reduce the cost of higher education for children of undocumented immigrants. In May, Felder told a local Democratic club that if they were looking for a real Democrat to represent them, “I’m not your guy.”

Felder’s opponent, attorney Blake Morris has promised to help push through the legislation Felder has either thwarted or stalled. Morris’ slogan: “Real Democrat.” Whether or not Felder loses the Democratic primary in September, he will also be appearing on the Republican, Conservative and Independence Party ballot lines. 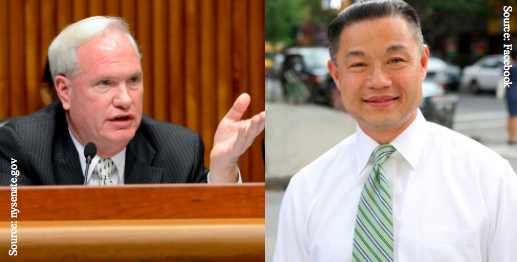 In 2010, Tony Avella knocked off a 19-term Republican incumbent and seemingly put District 11 in progressive hands. In 2012, the mercurial Avella joined the IDC, helping to ensure Republican control of the Senate. He continues to reap the financial benefits of that move. He has raised just under $240,000 this cycle at an average clip of $1,283 per contributor.

It looked like Avella was going to coast to an easy re-election before his opponent John Liu jumped into the race days before the filing deadline and quickly gathered the necessary petition signatures with the help of No IDC activists. Liu was the first Asian-American to win citywide office in 2009 when he was elected City Comptroller. He quickly became a thorn in Bloomberg’s side by exposing corruption and mismanagement in the billionaire mayor’s administration. Most famously, Liu laid bare the City Time scandal, an effort to update the city’s timekeeping system for municipal employees that was plagued by $600 million in cost overruns at the hands of private contractors hired by Bloomberg.

Liu limped to a fourth-place finish in the 2013 mayoral race after the FBI launched an investigation of his fundraising practices for which he was later cleared. In 2014, he ran and narrowly lost to Avella. Since then he has been teaching, learning to fly small airplanes and running in marathons. Now he is back in another kind of race. An outspoken critic of the IDC since his first run against Avella, Liu hopes to ride this year’s wave of activist energy back into office. 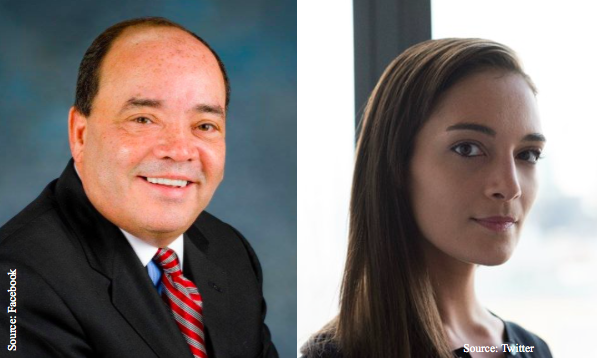 It’s the old school machine politician against the millennial socialist who is 40 years his junior in this rapidly gentrifying North Brooklyn district.

The neighborhoods that make up the 13th district — Jackson Heights, Woodside, Elmhurst, East Elmhurst, Corona — helped propel Alexandria Ocasio-Cortez to her landslide win over Joe Crowley and No IDC candidate Jessica Ramos hopes to catch some of that Ocasio magic in her race against veteran legislator Jose Peralta who joined the IDC shortly after being re-elected in 2016. Ramos whose parents immigrated from Colombia, worked as a union staffer before becoming the director of Latino media for the de Blasio administration. A lifelong Queens tenant and straphanger on the beleaguered 7 train, she has made reforming rent laws and fixing the MTA two of her top campaign priorities.

Jesse Hamilton is known in his district for delivering constituent services. But will voters forgive him for throwing in with the IDC and the Senate Republicans? Hamilton’s opponent Zellnor Myrie hopes not. In a neighborhood experiencing rapid gentrification and displacement of longtime residents, Myrie is vowing to end vacancy decontrol, which gives landlords an incentive to push out long-term residents and to close the preferential rent loophole, which allows for sudden and unexpected rent increases.

The incumbent in the 22nd District is Marty Golden, a pro-Trump troglodyte who once claimed that the 9/11 hijackers came from the Arab American community in Bay Ridge. He will face a Democratic challenger in November for the first time since 2012 when he trounced Andrew Gounardes by 16 points.

An aide to Brooklyn Borough President Eric Adams, Gounardes is back for a second try and is the party establishment’s favorite in the race. His primary opponent — journalist-turned-candidate Ross Barkan — is running an ambitious grassroots campaign calling for abolishing ICE, universal rent control, free CUNY and SUNY and Medicare-for-All and has been endorsed by People for Bernie and Unite Here! Local 100 among others.

Whichever challenger squares off with Golden in the fall, he will confront a 16-year incumbent who sits on the Senate committee that approves and oversees the MTA’s five-year capital spending programs. Not that it’s done much good for his South Brooklyn constituents who face increasingly tortuous subway commutes. Since 2015, Golden has received 10 tickets for speeding in special zones near city schools that are monitored by speed cameras and has been accused of impersonating a police officer by a cyclist with whom he had a confrontation. That’s not much of a transit policy though it’s one way for his constituents to know he spends time in his district. Unfortunately for children in the city, Golden and his Republican Senate colleagues recently failed to renew a law that allows the city to use those speed cameras.