As Gov. Andrew Cuomo stepped out from between the columns of the neoclassical-style venue on Park Avenue on June 14, shepherded by police officers into a waiting SUV, he likely heard the thousand or so housing activists on both sides of the building’s entrance, chanting his name. Unlike the nonunion contractor inside, the Building Trades Employers’ Association, which had just given him its “Master Builder” award, the demonstrators were not there to sing the governor’s praises. The rally was a show of grass-roots force urging Cuomo to strengthen New York’s rent laws when they expire next year, rather than allow them to unravel further.

The governor did not acknowledge the protesters. That’s not surprising, as he has received more campaign contributions from real estate than any other industry while allowing a housing crisis to fester and spread since he took office in 2011.

Real-estate groups have given Cuomo $12.3 million since 2010, including $1.9 million so far this election cycle, according to an open-source data analysis conducted by The Indypendent. They give it through their political action committees, firms, employees and limited liability corporations. LLCs are shell companies commonly used to shield a company’s holdings from the financial liabilities of one property — but in what is called the “LLC loophole,” state campaign-finance laws let landlords game the system: they can donate the maximum amount permitted for an individual business from multiple LLCs.

WHO’S GIVING TO CUOMO? Click to zoom in and view donors by industry.*
*Donations in which industry or organization information is unknown are not shown.Source:New York State Board of Elections, NYC Open Data, Follow the Money, Little Sis.

“In the United States, we have codified and legalized what in other countries would be considered corruption,” said Sarah Goff, associate director of Common Cause, a government watchdog group that has long called for the closing of the LLC loophole.

The frenzy of cash comes at a crucial time for the future of rent stabilization in New York City. The city is home to upwards of 2.5 million people who are covered under some form of rent regulation, first established as rent control in 1943, and as rent stabilization in 1969. The laws have been incrementally eroded since the 1990s, with loopholes such as vacancy decontrol, in which vacant apartments can be deregulated if their rent is high enough, and preferential rents, in which landlords give tenants discounted rents that can snap up to the legal maximum when their lease expires. Owners also raise rents for major capital improvements (MCI).

State law prohibits the city from closing these loopholes, and the state government has also weakly enforced the laws against illegally high rents. This has left half of all renters in New York City “rent burdened,” paying more than 30 percent of their income on rent, according to 2018 data from the Rent Guidelines Board. Tenant advocates want the state legislature to repeal vacancy decontrol and the preferential-rent loophole when the laws come up for renewal next year, in order to stop the erosion of affordable apartments. But the state Senate has consistently blocked such measures, with Cuomo tacitly supporting the Republican gerrymandering and the renegade Democrats who preserved GOP control.

Many of Cuomo’s biggest real estate donors are linked to the powerful Real Estate Board of New York (REBNY), an organization of large landlords and developers with more than 1,400 member firms. REBNY has given Gov. Cuomo $1.1 million since 2010 through its political arm, the Real Estate Board PAC. Its members, their employees, their shell LLCs and their family members also show up on the campaign-contribution rolls.

Of the $12.3 million that Cuomo has received since 2010 from the real-estate industry, $5.9 million came from LLCs and $4.1 million came from firms and affiliated individuals. While this is clear evidence they are seeking influence, it is not illegal. LLCs are treated as individuals, not subject to the same limits as corporations.

Real-estate firms and executives for firms such as RXR Realty, the Moinian Group, Fisher Brothers, Triangle Equities and Brookfield Property Group all have much to gain with Cuomo in their pocket: influential board appointments, the approval for mega-developments on state land, the possibility of weakening regulations, and government subsidies that sweeten the already lucrative development pot.

The luxury-development firm made headlines in May when it began talks to purchase Jared Kushner’s 666 Fifth Avenue office building, but Brookfield has also entered into the multifamily property market, with a $350 million investment in a rent-stabilized portfolio in East Harlem in 2016 and new mega-developments underway in Midtown, Greenpoint and the South Bronx. The company has contributed half a million dollars to Cuomo since 2010, including $40,000 on Jan. 9, 2017 and $150,000 on Jan. 9, 2018 under three separate LLCs registered to the same address — chump change for the Canada-based corporation, which possesses $80 billion in assets.

Perhaps more than any other firm, Brookfield Properties has reason to be interested in the weakening of rent-stabilization laws. Its investments in rent-stabilized portfolios will not yield a significant profit unless the apartments are converted to market-rate. As The Indy has previously reported, the firm Brookfield loaned money to for a rent-stabilized portfolio purchase is already using aggressive tactics to force residents out of the 49 East Harlem buildings it has invested in, including harassment, refusing to make repairs, turning off heat in the winter and turning it on in the summer. The state failing to strengthen tenant protections will enable such firms to continue driving out tenants.

“Rent stabilization suppresses rents,” says Andrea Shapiro of the Metropolitan Council on Housing, a tenant advocacy group. “It makes it harder to justify high rents in surrounding areas, and luxury developers buy real estate at well above the rent rolls with the hope of deregulating through MCIs. That’s when we see large-scale construction as harassment.”

Even while working to push tenants out, Cuomo’s big-money real-estate donors have taken advantage of a generous tax benefit for housing them. Known as 421a, it allows developers to receive a property-tax abatement for new buildings if they reserve 20 percent of the units built for “affordable housing” for 10 to 40 years. The affordable units don’t have to be in the building receiving the abatement; they can even be in a different borough.

First introduced in 1975 to encourage development when the city was experiencing massive abandonment, the 421a program has been revised over the years to create incentives for building affordable units. But it mainly functions as a government subsidy for developers.

“It allows them to not pay taxes for a period of time, and it cushions their initial investment,” says Shapiro.

The benefit expired in 2015, but Cuomo renewed it two years later, removing a provision that marketed affordable units to locals first. Developers not only cheered but reached for their pocketbooks. On May 19, 2017, one day after 421a’s renewal, developer RXR and Gabeli Holdings LLC, which share the same address, gave $130,000 to Cuomo.

A Piece of the Pie

RXR and other developers have received additional perks from Cuomo over the years. In 2013, he signed an amendment to the Hudson River Park Act that allowed for the development of office buildings along the greenway’s piers. Two years later, RXR signed a 97-year ground lease with the Hudson River Park Trust to redevelop Pier 57 at 15th Street into a sprawling office park for Google.

In addition to lifting red tape and fostering lucrative development deals, Cuomo has made a habit of appointing his developer donors to influential board posts.

Through LLCs, executives and individuals linked to it, RXR has showered $366,000 on Cuomo throughout his three campaigns for governor. Last year, it donated $205,000 to his re-election campaign. While taking in funds from the firm, which possess $12.2 billion in assets, Cuomo appointed RXR CEO Scott Rechler to the Port Authority’s Board of Commissioners, where he oversaw the authority’s $30 billion budget from 2011 to 2016. In 2017, he appointed Rechler to the Metropolitan Transportation Authority’s board.

Rechler is also chair of the Regional Planning Association (RPA), an influential think tank that sets a strategic vision for urban planning in the New York metropolitan area. Its Fourth Regional Plan, published in February, advocates for a streamlining of the bidding process and for cost reductions in construction. That puts it at odds with another of Cuomo’s supporters, the building-trades unions.

With the help of Cuomo and RPA, Rechler can craft urban planning strategy, determine its execution and profit directly from it, explains Cea Weaver, research director of New York Communities for Change. The Fourth Regional Plan enables him to justify RXR’s developments in suburban areas like Hempstead, New Rochelle and Glen Cove, as New Yorkers are priced out of the city and move to the suburbs.

“What [Rechler] is not saying is that these units are not affordable for people of color who live there,” said Weaver. RXR is positioning itself to take the place of urban-planning departments for vulnerable small towns, she adds. “As people are pushed out of urban areas, a firm like RXR can come in and offer to develop the entire downtown, gentrify it and promise to make it appealing for millennials to move in.” 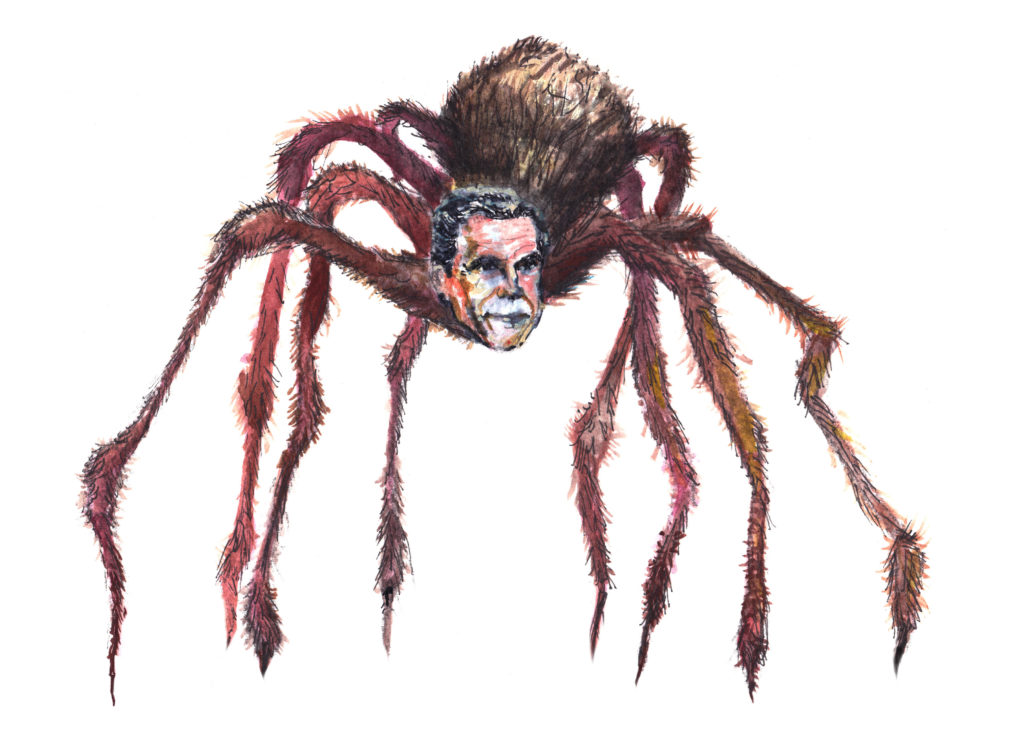 A peek behind the scenes — how our data reporter, Georgia Kromrei, uncovered Cuomo’s web of influence. Read her reporter’s notebook and view her methodology step by step.

While Cuomo has benefited from his ties with the real estate industry and their contributions, those relationships could come back to haunt him if he tries to run for President in 2020. Both Cynthia Nixon, challenging Cuomo in the Democratic primary, and Zephyr Teachout, a candidate for state Attorney General who won 34 percent of the vote when she ran against Cuomo in the 2014 primary, have called him out for his pay-to-play politics. They and other Democratic insurgents running for the state Senate have committed to refusing money from corporations and have pledged to close the LLC loophole.

Cuomo has moved to the left in this year’s race in an attempt to outflank Nixon, touting, among other stances, his opposition to migrant family separations. On the other hand, the money RXR has donated to Cuomo is far less than the $12.4 million in rent it has collected over the past 16 years from an Immigration and Customs Enforcement field office in a Manhattan building it co-owns.

Politicians from Richard Nixon to Bill de Blasio have long insisted that campaign contributions don’t affect their policies. But as billionaire Betsy DeVos, a major donor to Republicans in Michigan and elsewhere, said in 1997: “We expect a return on our investment.”

Decca Muldowney and Peter Rugh contributed to this article.

NOTE: An earlier version of this article that appeared in The Indy’s August print edition described Cuomo has having received $10 million from the real estate industry since 2010. Additional donations have since been uncovered. The figure has been updated to $12.3 million accordingly.