People in leftist social movements rarely argue that they should create a network of business enterprises that advance their goals. Yet as documented by historian Joshua Clark Davis in his new book, From Head Shops to Whole Foods: The Rise and Fall of Activist Entrepreneurs, a number of social movements have adopted that practice over the last few decades.

Although the title points to the disheartening reality that the health-food behemoth Whole Foods, hated by many activists and now owned by Amazon, has made perhaps the greatest impact of any U.S. business born from those roots, the history the book explores is quite a bit more ambiguous. Even as they struggled to survive without entirely compromising their values, activist enterprises sometimes embodied the values of movements, provided space for activists to congregate, raised money for important causes, and more. While this may sound like a strategy that is overall accommodating the values of American capitalist society, they at times incurred the wrath of the state.

Davis devotes one chapter each to four kinds of enterprises associated with social movements — African-American bookstores, headshops, businesses spawned by the women’s movement and natural-food stores — from the late 1960s to the present. In all cases, they at first served movements as meeting centers, information outlets and more. (Headshops purveying paraphernalia to enjoy marijuana served both the peace movement, which then had strong connections to the counterculture and the marijuana-legalization movement, as well as selling “underground” newspapers and comics.) But as those movements slowed down, their enterprises suffered. Economic downturns produced strains on businesses that often struggled to break even in good times.

Repressive authorities added to their problems. At one point, Black bookstores were regarded as second only to Black Panther headquarters as dangerous centers of Black radicalism. Headshops were confronted by aggressive crackdowns. Journalists killed stories on Liberation Enterprises, a mail-order clothing and jewelry shop in Brooklyn, when they saw an apron declaring “Fuck Housework” for sale.

Such enterprises could also cause divisions within social movements. Davis describes the high hopes accompanying the opening of the Feminist Women’s City Club in Detroit, which housed half a dozen businesses, including a credit union and a bar and cafe where women could “go for a drink alone without being harassed by men.” But those hopes were accompanied by accusations that the center exploited its workers. Describing an attack on Diana Press in Oakland, which resulted in $100,000 of damage, Davis lends credence to the employees’ suggestions that the culprits might have been women enraged by the idea of feminist businesses.

In order to survive, these enterprises often broadened their missions to include less directly movement-oriented activity. For example, Black bookstores sold more Black-themed romance novels as interest in revolutionary theorists slackened. More significantly, large corporations moved in on territory previously written off as marginally profitable. Black authors were increasingly published by major presses and sold in mainstream bookstores. Feminist credit unions struggled to survive while major financial corporations reduced the discriminatory practices that had inspired their founding. Chain stores sold the same rolling papers and pipes as headshops, which were decimated in the 1980s after state and federal laws banned marijuana paraphernalia.

But nothing quite compares to the rise of Whole Foods. Founder John Mackey originally participated in co-op groceries and came to believe that “business and corporations were essentially evil because they selfishly sought only profits.” When he opened a store himself, calling it Saferway (to mock the Safeway supermarket chain), he soon developed the practice of doing high volume to effectively compete in Austin’s crowded natural-food market. 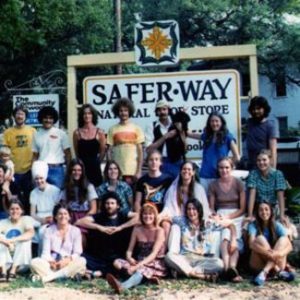 Mackey’s personal philosophy soon moved toward a libertarianism that became more belligerent and even paranoid as Whole Foods’ fortunes improved. Although he highlights the efforts of customers and neighbors in getting the store back in shape after a flood caused massive damage in 1981, he never mentions that Whole Foods received an emergency disaster loan from the Small Business Administration. While the store had retained some “horizontal” practices, it has remained highly hostile to unions. Notwithstanding some employee ownership, Whole Foods brought in venture capital firms. Mackey filled the company newsletter, “The Whole Story,” with rants about how critics of capitalism were filled with envy and resentment. (Davis’ narrative ends before Whole Foods was acquired by that ultimate corporate octopus, Amazon.)

The evolution of the natural-food industry, once a hotbed of cooperatives and hounded by the government as quacks, into Whole Foods, the pre-eminent symbol of upper-middle-class distinction, is disheartening and might call the whole idea of social-movement enterprises into question. That would be a mistake. In their heyday, all of the movements described produced spaces where those with alternative ideas and practices could come together with others. Their storefronts also punctured the capitalist narrative reiterated on every retail strip: That the only thing that matters is making a profit by meeting individual consumers’ demands. Instead, they provided a way into a world where other values mattered and ordinary people made history.

If anything, From Head Shops to Whole Foods could be expanded to include examples like independent weeklies and anarchist infoshops. But in a world of ever-rising commercial rents, are the storefronts whose motto might be “Another world is possible—step inside” possible any more? Even in college towns and major cities, corporate homogenization rules, punctuated only by hipster storefronts that celebrate the “creativity” of their owners and customers, but no wider agenda of social change. Corporate “social” gestures touting their fair labor, diversity or environmental standards are no substitute.

Some enterprises have survived. The Park Slope Food Co-op continues to thrive, even as the hippies who moved to the area in the 1970s have long been superseded by finance-industry flotsam. Other enterprises open in neighborhoods like Bushwick, far from the center of the city but still playing the same role. Those cities, suburbs and rural areas largely abandoned by capital may also provide relatively fruitful terrain for new types of social-movement enterprises. The extensive network of community farms created in Detroit might be one model, although even they are now threatened by new waves of gentrification. Similarly, some independent media hold strong, although they also face serious challenges in the internet age.

The book also does not mention that the legalization of marijuana in several states has produced numerous self-styled “activist enterprises,” a phenomenon pot activists have dubbed the “Green Rush.” Their actual practices, however, range from donating to movement organizations to using the cause as self-promotional branding, from encouraging their employees to join unions to outright wage theft.

The terrain has dramatically shifted since the late 1960s and early 1970s, but the strategy of creating enterprises that disseminate the message, embody movement values and serve the people is one that is likely to resurface.