As the sky lightens on Thursday mornings, construction workers stream down the streets west of Penn Station, men and a few women clad in lime-green and orange T-shirts, blue jeans and work boots, their hands clutching large coffees. Their hard hats are festooned with stickers — including a green rectangle that reads “#CountMeIn.”

#CountMeIn is a campaign and a movement that began last fall, as workers began holding weekly rallies outside Hudson Yards to protest developer The Related Companies’ use of nonunion labor on the behemoth West Side project. Related had signed a “project labor agreement” with the New York City Building and Construction Trades Council, the umbrella coalition for the city’s construction unions, to use exclusively union labor on the first phase. But it refused to do that for the second phase, instead hiring contractors using a so-called “open shop” mix of union and nonunion workers.

‘It’s not about saving nothin’. It’s about breaking us.’

At 50 Hudson Yards, a 58-story office tower Related says will be the city’s fourth largest when it’s completed in 2022, union officials say it has brought in nonunion laborers, operating engineers and metallic lathers, the workers who build the metal frameworks that reinforce floors and hold walls.

Construction workers “have had enough of corporate greed and are fighting back by demanding middle-class wages, a fair work environment and access to quality jobs,” Building Trades Council President Gary LaBarbera said in a statement to The Indypendent.

Nonunion contractors have been gaining an increasing share of the city’s construction industry for years.

“In the ‘80s, we did everything,” says veteran Laborers organizer Mike Hellstrom, assistant business manager of the four-local Mason Tenders District Council, speaking to this reporter for LaborPress in early September. But now, work on smaller residential buildings is almost entirely nonunion.

Developers like Macklowe Properties, JDS Development Group, and Two Trees have used nonunion labor on high-rise apartment buildings in Manhattan and Brooklyn. At JDS’s 111 West 57th Street, an 82-story tower where apartments start at $18 million, workers were paid as little as $15 an hour and the general contractor was indicted in May for allegedly cheating more than 500 employees.

Related is now trying to use nonunion labor on large commercial buildings in Manhattan, the industry’s most solidly union sector. “Commercial construction is our bread and butter,” says Hellstrom. Over the last five years, he says, anger among rank-and-file workers has reached “a boiling point.”

A spate of fatal accidents increased that anger. In 2015, 25 construction workers in the city were killed on the job; in 2016, 21 were. More than 90 percent of them were nonunion workers, according to the New York Committee for Occupational Safety and Health.

On nonunion jobs, former workers say, they often don’t have basic safety protections such as being “tied off” with a harness to restrain them if they fall. “Open shops” are also dangerous, union officials say, because nonunion workers generally don’t get the safety training union apprentices do.

Large developers have historically been willing to pay extra for union labor because they get the job done faster and better, but the open-shop model revolves around using union workers for more skilled tasks and nonunion to save money on others. Building-trades unions also see it as a divide-and-conquer tactic. 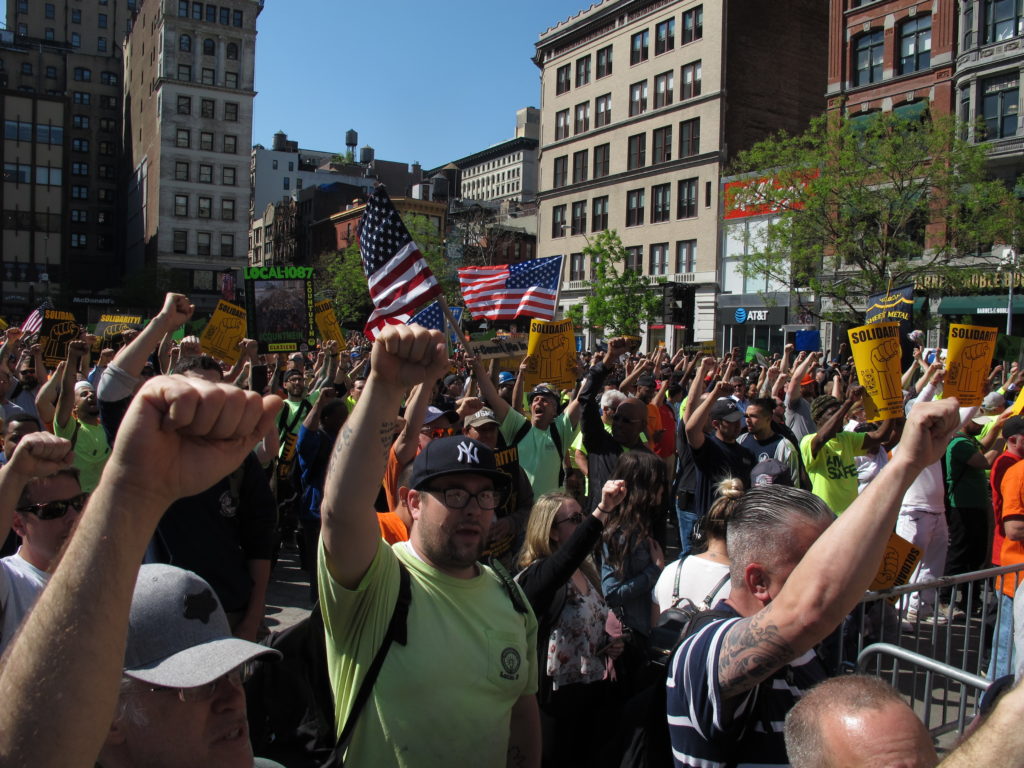 The Building Trades Council has a much more symbiotic relationship with the Real Estate Board of New York, the trade group representing large developers, than most unions do with their employers because they depend on development to get work. They strongly supported the Hudson Yards project, a heavily subsidized mix of offices and luxury housing that was the centerpiece of Mayor Michael Bloomberg’s vision for the West Side, on the grounds that it would bring them jobs.

They did ally with the tenants movement in protesting Mayor Bill de Blasio’s 2014 affordable-housing program, as his administration refused to use union labor. That alliance has largely faded, although smaller groups of union workers such as Laborers Local 79 continue to protest the plan’s rezoning schemes.

But Related, whose owner, Stephen Ross, is a former chair of REBNY, has attacked the unions both in the courts and in the press. In March, it sued the Building Trades Council and LaBarbera for $75 million, charging that the unions had fraudulently inflated costs at Hudson Yards, such as by having workers being paid $42 an hour delivering coffee and lunch. (Most high-rise construction sites are closed to outsiders, so delivery people can’t get in.)

The legal case parallels a publicity campaign. For the last three years, the Center for Union Facts, an anti-union propaganda outfit run by lobbyist Richard Berman, has been running ads, launching websites and publishing newspaper columns accusing the building-trades unions of racism, with “bosses male, pale and stale” and blaming LaBarbera personally for the subways being screwed up.

The building-trades unions were largely segregated until the late 1960s, but blacks, Latinos and Asians are now a majority of union construction workers in the city and more than 60 percent of apprentices, according to a 2017 report by the Economic Policy Institute. The nonunion sector is more than half Latino and largely immigrant — many of them undocumented, which makes them much more vulnerable to wage theft.

#CountMeIn began with the weekly protests at Hudson Yards by the rank and file but has expanded to include larger rallies organized by the union leadership. A Union Square demonstration in May centered on the Building Trades announcing their endorsement of Gov. Andrew Cuomo.

Their tone has gotten more militant. In August, 37 people were arrested in a sit-in on Park Avenue across from National Football League headquarters. (The connection: Related’s Stephen Ross owns the Miami Dolphins.) But the protests, like street demonstrations in general, are still symbolic.

If the unions were to try to stop work at Hudson Yards, that would likely run afoul of federal laws against “secondary boycotts,” which prohibit unions from going on strike against employers they don’t have a direct dispute with. In May, Related filed a complaint with the National Labor Relations Board after members of Steamfitters Local 638 briefly walked out to demand that the developer use union sheet-metal workers.

Union members see Related’s actions as a war on working people’s right to make a decent living. “My goal is to breed solidarity,” Laborers Local 79 member Justin Badagliacca, 36, said during a rally in March. “These guys want their employees to live in fear, so they can’t say, ‘I don’t want to do this, it’s unsafe.’”

“I think they want the title of ‘the guys who took down New York City unions,’” he added.