The Indypendent
Menu
A Free Paper for Free People
Illustration by David Hollenbach.

Television ads featuring starry-eyed millennials thanking New York Gov. Andrew Cuomo for a chance at higher learning cropped up on screens across the state this summer. The ads, paid for by the governor’s campaign, tout him as a “proven leader who gets real results.”

Yet as Cuomo campaigns against the left-leaning primary challenge from actress Cynthia Nixon, the results of his free college-tuition program, the Excelsior Scholarship, aren’t as real as he would have New Yorkers believe. Defectum might be a more appropriate Latin moniker for the program.

After presiding over years of funding cuts and tuition increases for New York’s public universities, Cuomo announced the free-tuition plan in the aftermath of the 2016 presidential campaign and invited Bernie Sanders to share the stage with him when it was inaugurated in January 2017.

‘It’s ridiculous how much he is trying to take credit for something that has delivered so little so far.’

When the details were rolled out three months later, the governor’s office claimed that “940,000 middle-class families and individuals making up to $125,000 per year” would qualify to attend schools in the City University of New York (CUNY) and State University of New York (SUNY) systems. That 940,000 figure was picked up by news outlets that are now quoted in Cuomo’s campaign ads. “Nearly 1 million students eligible for free college,” reads text attributed to Inside Higher Ed that flashes across the screen in one video.

But a closer look at the program, now beginning its second year, reveals that far fewer students are receiving the scholarships — barely 20,000. A mere 64,000 or so applied.

“It’s ridiculous how much he is trying to take credit for something that has delivered so little so far,” said Stephen Brier, a professor of urban education at the CUNY Graduate Center.

Reinforcing the perception that Excelsior is an elaborate public-relations ploy, Cuomo’s campaign has also been accused of breaching confidentiality laws in order to feature students in ads. The governor’s office invited scholarship recipients to his State of the State address in January. Then his campaign staff used the invite list to obtain their contact information and solicit their participation in television commercials.

Students who rallied outside Borough of Manhattan Community College on Aug. 24 presented a different narrative.

“I find it ironic, not to say insulting” how few students “were given something by this scholarship while the rest of us had our tuition raised,” said Enrique Peña, a Queens College student and DREAMer who worked two jobs this summer to be able to afford school. (Undocumented students are not eligible for New York State or federal aid.)

Other students described being ineligible for Excelsior due to its strict course-load requirements, which demand students be on track to graduate from community colleges in two years and receive a bachelor’s degree in four.

When Razieh Arabi first heard of Excelsior, she felt like it was a “miracle.” A single mother studying accounting at Baruch College, Arabi had needed three years to complete her associate’s degree. When she applied for the scholarship to help her finish her bachelor’s degree, she was rejected because of the extra year it had taken to earn her associate’s.

“Many students are dealing with the same issue,” she said.

According to an August study by the Center for an Urban Future (CUF), just 20,086 students, 3.2 percent of the 633,543 undergraduates enrolled in public colleges statewide, received Excelsior funding last year. 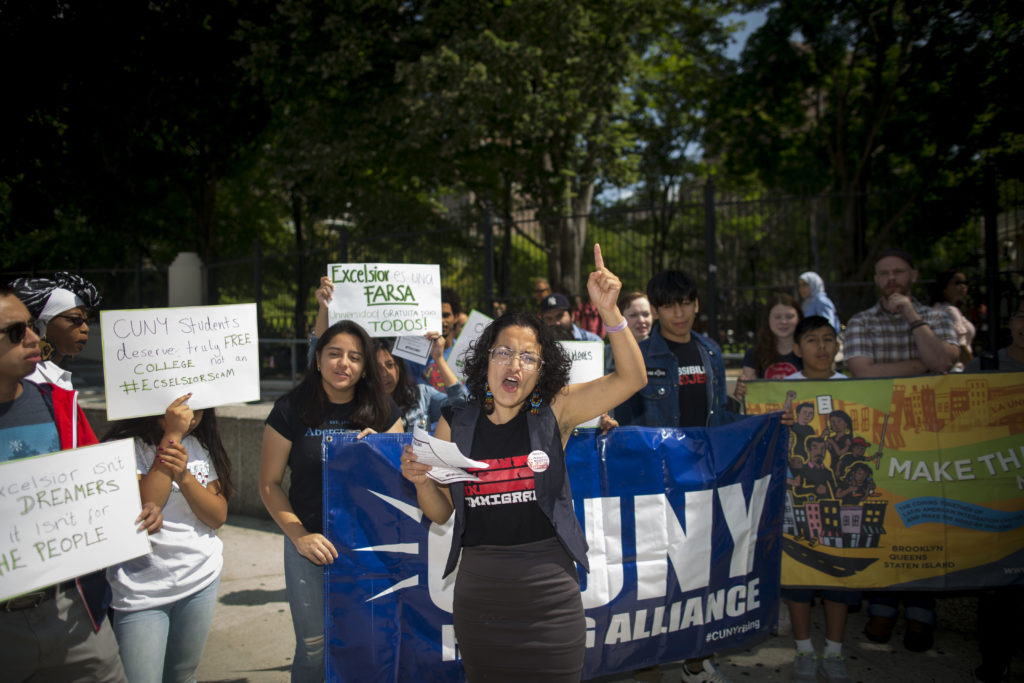 Any way you crunch the numbers, they are far short of a million.

Cuomo spokesperson Don Kaplan chided the study’s authors, telling the Daily News the CUF “shouldn’t stand in the way of that program.”

The low number of students receiving aid is not the only complaint about the Excelsior program. “We have gone months without formal written guidance,” Sarah Buell, a financial aid officer at SUNY’s Erie County Community College, complained on Aug. 1 during a meeting with the state’s Higher Education Services Corporation, which administers Excelsior. Buell was speaking on behalf of the statewide association of financial aid officers. She said the aid officers at SUNY’s 64 campuses were essentially “establishing 64 different versions” of Excelsior.

Similar confusion has spread on CUNY’s campuses, but to a lesser degree, because fewer students are applying. Many students described being rejected without being told why.

“It is shocking that financial-aid officers do not yet understand this program,” Kaplan told the Albany Times Union, which first reported Buell’s remarks. “The Excelsior Scholarship is now a year old, and New York has devoted an enormous amount of resources towards explaining its policies and procedures.”

CUF senior researcher Tom Hilliard, the lead author of its Excelsior study, told The Indypendent that CUF still thought the program was a good idea, but “design flaws in this program are causing it to sharply underperform.”

Excelsior covers the last-dollar amount of tuition, the bill not already picked up by state’s Tuition Assistance Program (TAP) or federal Pell grants — neither of which are available to part-time or undocumented students — and, in some cases, private funding. In order to receive Excelsior money, Hilliard notes, “students have to take what is in effect a super-full-time course load” — 15 credits. A typical full-time course load, the minimum required to receive TAP and Pell grants, is 12 credits a semester. Students already enrolled in college (in some cases before Excelsior existed) who want to join the program are required to have taken 30 credits a year previously in order to qualify.

“Two-thirds of the people who applied for Excelsior were denied,” said Hilliard, whose study relied on data provided by the state. “Of those, 83 percent were denied because they had insufficient credits. That’s well over 30,000 students” — 36,095, to be precise — “almost twice as many as actually received Excelsior grants.”

“When you first go into school, planning 15 credits a semester is kind of overwhelming, especially when you have to work,” Brooklyn College senior Isaac Uriburu, a graphic design student who was denied an Excelsior scholarship last year, told The Indy. Uriburu receives some TAP money but not enough to cover his expenses. He said he would have taken the required credits had he known it would mean he would attend college tuition-free. But the program hadn’t even been announced when he began attending school.

Contrary to the hype, Excelsior is not designed to help New York’s working-class and low-income students, but rather its middle class. The top household income for eligibility was raised to $110,000 this year and will go up to $125,000 in 2019. Because the program provides aid on top of TAP and Pell grants, students from households closer to the limit stand to receive the most money.

At CUNY, 60 percent of undergraduate students and 71 percent of those enrolled in associate-degree programs come from households with incomes below $30,000. Most full-time students already attend either tuition-free or nearly free, with TAP and Pell dollars. Yet graduation rates are abysmal. Just one in five students enrolled in CUNY’s community colleges receives an associate’s degree after three years. At the senior colleges, 55 percent of students fail to graduate after six years.

The problem for many students isn’t so much going to CUNY as it is staying there, says Professor Brier. “Many poor and working-class students don’t have to pay tuition, but they still have to struggle to go to school. It is very expensive to live in New York, and many of them come from families where they have to work either part time or, in some cases, full time. Many of them have families of their own.”

Both Brier and Hilliard argue that there are better ways to devote funds. Money could be put toward helping students with costs other than tuition, such as books and transportation, and hiring more full-time faculty, including guidance counselors — who currently are responsible for an average of 900 students each.

Adjusted for inflation and factoring in financial aid, per-student spending at CUNY is down 15 percent from pre-recession levels. Gov. Cuomo has vetoed bipartisan “maintenance of effort” legislation approved by state lawmakers in three of the last four years ­— bills that would require the state to appropriate enough aid for SUNY and CUNY to cover annual increases in operating costs such as salaries, rent, heat and electricity.

In an email, Barbara Bowen, president of the Professional Staff Congress, the union representing professors and adjuncts at CUNY, praised Cuomo for focusing national attention on public higher education, but added that “the real problem is that CUNY is desperately underfunded.”

“New York State could offer national leadership on higher education by restoring per-student funding at CUNY to sufficient levels and addressing the crisis of academic staffing,” said Bowen. “Most CUNY courses are now taught by adjunct instructors on short-term contracts and minimal pay. An investment in CUNY would be an investment in the future of a half-million New Yorkers, largely from low-income communities and communities of color.”

The limited programs that give CUNY students resources beyond tuition aid have proven successful. Graduation rates for community-college students who take part in its Accelerated Study in Associate Programs (ASAP), which combines access to books and free Metrocards with close academic guidance counseling, are double those of their peers. ASAP is funded by the city, which covers 38 percent of CUNY’s community-college operating budget. But even with plans to expand it from 21,000 students last year to 25,000 this fall, ASAP will still reach barely a quarter of community-college students.

Meanwhile, Excelsior doesn’t even appear to be working for the middle-class families it was designed to assist.

Corrinne Greene’s parents are public school teachers and her household falls under the state’s income threshold for the scholarship. The Brooklyn College theater major, now in her senior year, was rejected for not having taken enough credits to qualify. She described working two jobs over the summer in order to pay off hefty student loans.

At the same time that the state is reducing spending, tuition is going up. The CUNY Board of Trustees, the majority of whom have been appointed by Cuomo, has repeatedly raised it, including a $200 increase in July. It now costs full-time undergraduates nearly $7,000 a year to attend the university, a 26 percent increase since 2011. The rising cost puts a particular strain on part-time students, who make up 40 percent of those seeking associate’s degrees and one-third of those in bachelor’s degree programs. The cost increase is also borne by undocumented students, who are not eligible for TAP, Pell or Excelsior.

“There’s lots the governor could do” to improve both access to and quality of education at CUNY, says Brier, who noted that the physical infrastructure on many CUNY campuses has fallen into disrepair. “But you can’t run ads on TV saying that you repaired the roof and fixed the leak at the Lehman College library. You can’t run that kind of ad, but you can have a paraplegic African-American woman in an advertisement saying that Excelsior allowed her to go to college, and that’s what people remember. It’s so cynical.”