The Indypendent
Menu
A Free Paper for Free People
Participants in the March for Climate, Justice and Jobs demonstrate in Lower Manhattan on Sept. 6. Photo credit: Cristián Cáceres Granda.

As the speakers took to the stage one by one, dark and heavy storm clouds drew closer to Battery Park in downtown Manhattan — an ominous reflection of the subject at hand.

As many as 3,000 New Yorkers marched through the drizzle in Lower Manhattan Thursday evening to demand action on climate change ahead of next week’s Global Climate Action Summit in San Francisco. The Rise for Climate, Jobs and Justice rally and march drew support from more than 100 groups and was the opening salvo for a global day of action that will see more than 800 events take place this Saturday across the United States and in 90 countries around the world.

The marchers took over the streets of lower Manhattan. Chants, drumming and homemade protest art created a carnival-like atmosphere.

“I live for these events. The marching, the bands, they just get you so pumped,” said Thomas Wendol, a student at Queens College.

“It’s such a depressing thing to get involved in and it’s so hard to see change,” Wendol said of the climate crisis. “This right here is the change.”

The marchers passed by City Hill and then headed back down Broadway to Zuccotti Park, demanding local officials to increase investment in renewable energy, halt the development of new fossil fuel infrastructure and hold corporations responsible for pollution.

Santosh Nandabalan, an organizer with Food and Water Watch, said he’s seen the devastation of climate change, specifically extreme weather events like Hurricane Sandy, first hand: “I know people that lived in South Brooklyn that had to move up to the Bronx because of this. And I want to make sure that that’s heard. That we aren’t displaced for nothing.”

Many of the protesters criticized New York Gov. Andrew Cuomo for lagging behind his administration’s goal of 50 percent renewable energy by 2030. 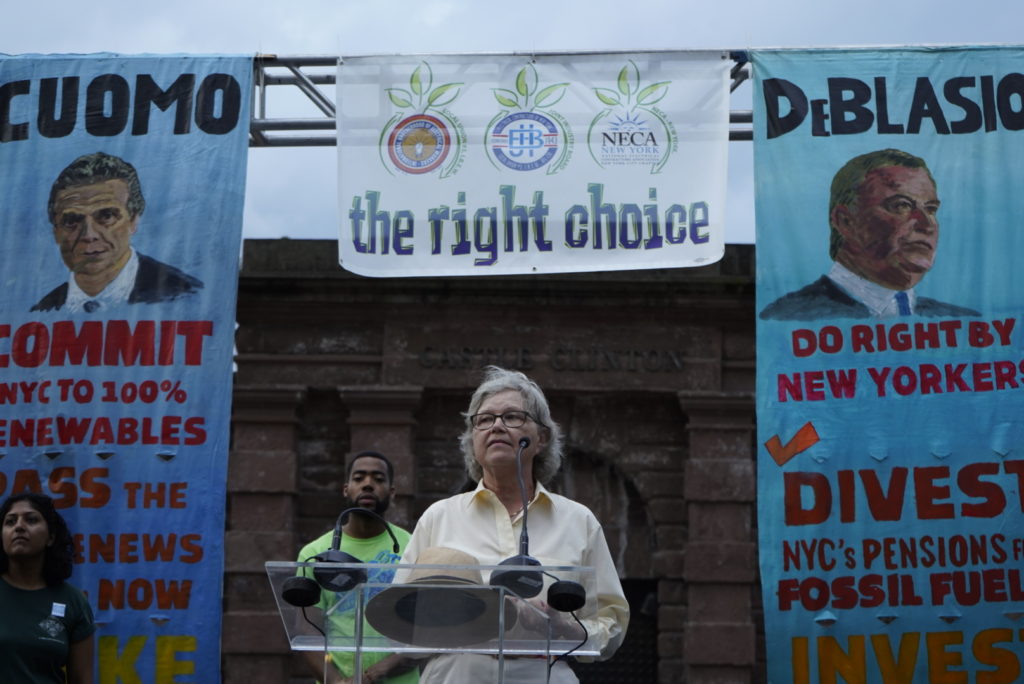 A speaker at Thursday’s rally, where protesters called on Gov. Cuomo and Mayor de Blasio to do more to address the climate crisis.. Credit: Cristián Cáceres Granda.

Only 4 percent of New York’s electricity currently comes from wind and solar and Cuomo has come under increasing criticism for undermining the growth of solar energy in New York while awarding millions of dollars in renewable energy grants to wealthy campaign contributors.

Following years of pressure from local climate activists, Mayor Bill de Blasio announced in January that the city would divest more than $5 billion in city pension funds from fossil fuel stocks by 2022. And on Wednesday, City Comptroller Scott Stringer announced his opposition to the Williams Pipeline, a proposed 23-mile natural gas transmission line that is slated to travel from New Jersey past the Staten Island coast and Coney Island and into the Rockaways. Still, as Trump rolls back environmental and climate regulations, Houston says local elected officials need to step up their game further.

“We have to make sure we’re holding all the other elected officials, not to anything that’s a little bit better than Trump, but their action needs to be at the scale of the climate crisis.”