A monthly confrontation between reproductive justice activists with New York City for Abortion Rights (NYC4AR) and anti-choice protesters from the Basilica of St. Patrick’s Old Cathedral has intensified in recent months. Speculation over the future of Roe v. Wade following Brett Kavanaugh’s Supreme Court confirmation has incensed NYC4AR’s ad-hoc reproductive justice coalition, which has pledged to step up its clinic defense efforts in the New York City area.

On the first Saturday of every month, churchgoers, clergy, and members of far-right groups — including Pro Bikers for Life and Franciscan Friars of the Renewal — gather within the cathedral for a special mass. Afterward, the anti-choice activists conduct what they describe as a “religious procession.” A priest carrying a portrait of Our Lady of Guadalupe and a large crucifix leads the way from the church’s gate on Mott Street to Planned Parenthood’s Margaret Sanger Health Center in the East Village.

Organizers with NYC4AR carried out their fourth clinic defense and counter-protest on Oct. 6. The tense, 8 a.m. rally drew larger crowds than usual, with approximately sixty people carrying signs and chanting on hand to greet the anti-abortion activists. Organizers speculate that the uptick in interest was largely fueled by a collective rage that weeks of mass protests in Washington, D.C., New York and beyond could not sway lawmakers on Capitol Hill from confirming an accused rapist to a lifetime appointment on the country’s highest court.

“Kavanaugh’s confirmation shows us that no one is coming to save us but ourselves,” says Kate Castle, a research assistant at the Guttmacher Institute and one of NYC4AR’s lead organizers. “It is likely that Roe will be overturned, and although access is already limited in many places throughout the country, overturning Roe will have dangerous health and legal consequences, relegating fundamental health care to potentially unsafe conditions and criminalizing it.”

‘Roe was not won because of the courts or the legislature, but by regular women and allies that applied massive political pressure from below.’

The clinic defense was further energized by anger over a heated confrontation that occurred in front of the Margaret Sanger Center on Sep. 1. Two NYC4AR members say they were assaulted by an anti-choice protester with St. Patrick’s congregation as they attempted to prevent the procession from moving down Mott Street.

Ed Bonfanti, a clinic escort and organizer with NYC4AR, said he intervened when he saw a member of the procession strike a fellow pro-choice demonstrator. He was punched on the forehead. “I had a concussion, went to see a doctor and was on painkillers for a week,” said Bonfanti. “That’s who these people are and we’re not going to let them continue to harass women trying to access healthcare.”

The man accused of the assault was pulled away by the police shortly thereafter. It remains unclear whether he was actually placed under arrest. The NYPD did not respond to requests for comment.

This month, the clinic defense crowd’s energy drew the ire of the NYPD, who had their work cut out for them escorting the churchgoers to the front of the Sanger Center. Activists delayed the march by nearly an hour, blocking the procession’s path across Houston Street into the East Village.

“We were able to slow down the march to the extent that most if not all of the patients were able to get inside before the members of the Catholic church showed up,” says Castle.

Each time NYC4AR organizes a clinic defense, the Catholic protesters are forced onto the opposite block, clearing the immediate space in front of the clinic for patients as they walk inside.

Chants of “Our bodies, our lives, our right to decide!” and “Abortion is healthcare, healthcare is a right!” echoed over the ongoing recitation of “Hail Mary,” blasted from walkie-talkies and repeated by the group of around 70 participants.

“We are Catholics and one of the most powerful prayers we use is the Holy Rosary, composed of many Hail Marys,” said Fr. Fidelis Mosckinski, one of the leaders of the monthly marches, who spoke with The Indypendent via email in June. Mosckinski explained why the anti-choice activists carry the portrait of Our Lady of Guadalupe with them: “Through her intercession, the Aztecs were converted to true religion from idolatry and the practice of human sacrifice.” 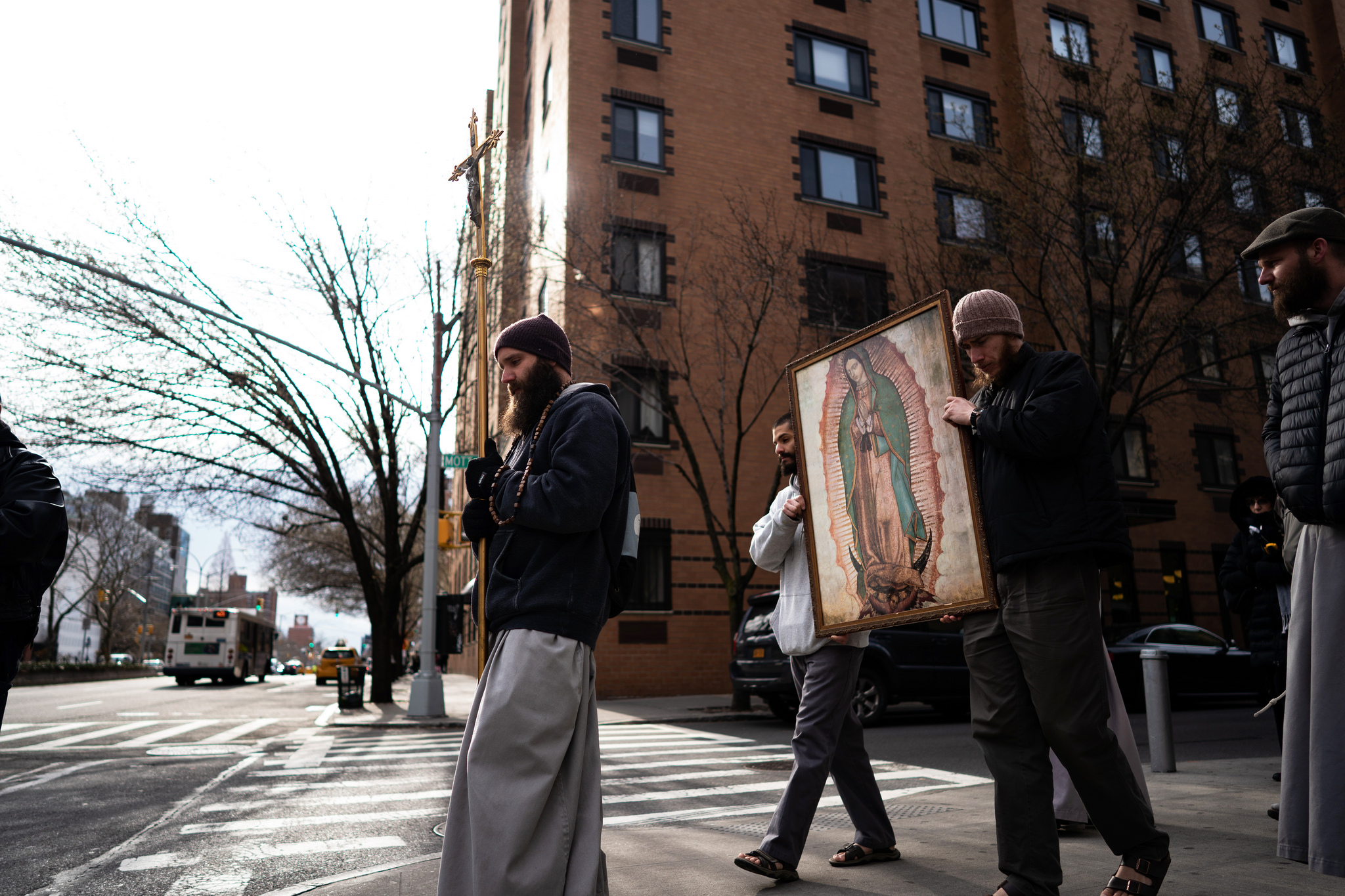 Churchgoers carry a portrait of Our Lady of Guadalupe through lower Manhattan, Oct. 6. Credit Erin Sheridan.

The friar refers to Planned Parenthood as a “criminal and eugenic organization” and says that one of the goals of the prayers is that the women’s health care provider “be permanently closed here in NYC and everywhere.”

Activists Christine Pardue and Leia Petty picked up nearly a dozen red roses left on the street by anti-choice advocates before walking back to SoHo to catch the end of NYC4AR’s rally in front of the church. The roses are left each weekend by fake counselors who attempt to steer potential patients of Planned Parenthood to crisis pregnancy centers where they might be persuaded against obtaining abortion services.

NYC4AR’s organizers plan to escalate the frequency of the group’s protests. The collective will hold public meetings and is organizing in tandem with members of the International Women’s Strike, in recognition, activists say, that the fight for abortion access intersects with issues of race and class.

“Roe was not won because of the courts or the legislature, but by regular women and allies that applied massive political pressure from below,” emphasizes Castle.

NYC4AR’s next protest against St. Patrick’s will be held on Oct. 16. 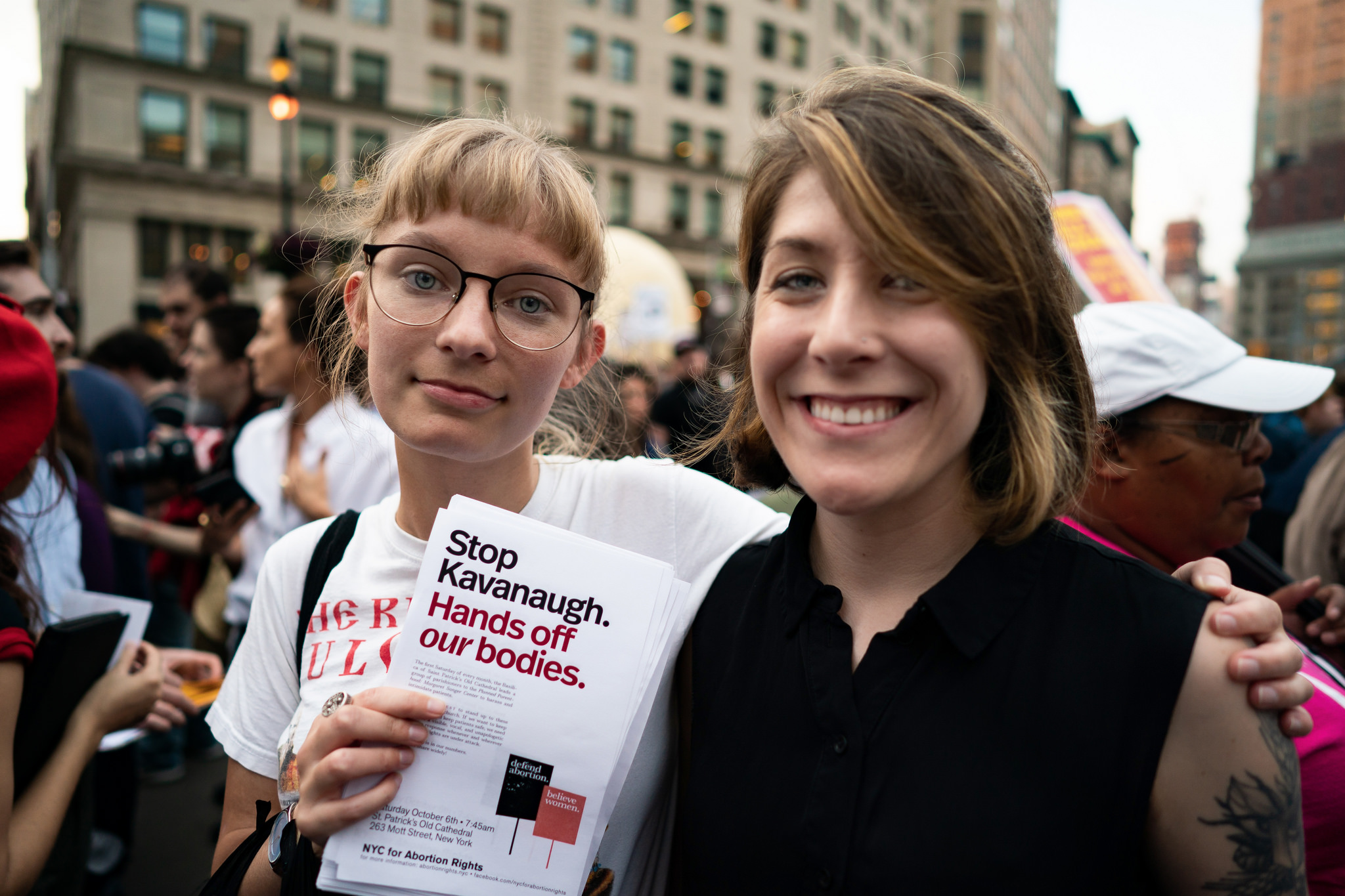