The Indypendent
Menu
A Free Paper for Free People
Place a hex on Brett Kavanaugh in Brooklyn this Saturday. Image Source: Catland.

THURS OCT 18
6PM–8PM • FREE
HISTORY: Black-Palestinian Solidarity: 1968/2018
The late 1960s saw the emergence of a militant Black-Palestinian solidarity, epitomized by the meeting between members of the Black Panthers and members of the Palestinian Liberation Movement at the Pan-African Cultural Festival in Algiers in 1969. Fueled by anti-imperialism, they saw their struggles as revolutionary, militant and internationalist. Fifty years on, new forms of solidarity and new politics on the ground have emerged. A panel discussion will be followed by a video presentation, “Visions of Liberation and Solidarity: 1968 / 2018,” with archival material on key moments of solidarity between African-American and Palestinian political movements from 1968 to the present.
Columbia University – Wood Auditorium, Avery Hall
1172 Amsterdam Ave., Mnhtn

FRI OCT 19
1PM–5PM • FREE (must RSVP)
CONFERENCE: Queer New York & Urban Performance
Held in conjunction with the exhibition “Rubbish and Dreams: The Genderqueer Performance Art of Stephen Varble” at the Leslie-Lohman Museum of Gay and Lesbian Art, this one-day symposium will explore queer performance and its relation to NYC’s public spaces in the 1970s and ’80s.
NYU Performance Studies, Rm 612
721 Broadway, Mnhtn

OCT 19 & 20, NOV 16 & 17
FRI & SAT, 9:30PM–11PM • $20 in advance/$25 at the door, $20 per person food/drink minimum.
PERFORMANCE: Me & Mr. Jones: My Intimate Relationship With David Bowie
Raquel Cion, described by the New York Times as a “half witch… half cabaret performer,” explores her soul love for David Bowie’s artistry and humanity through personal stories and music.
Pangea NYC
178 2nd Ave., Mnhtn 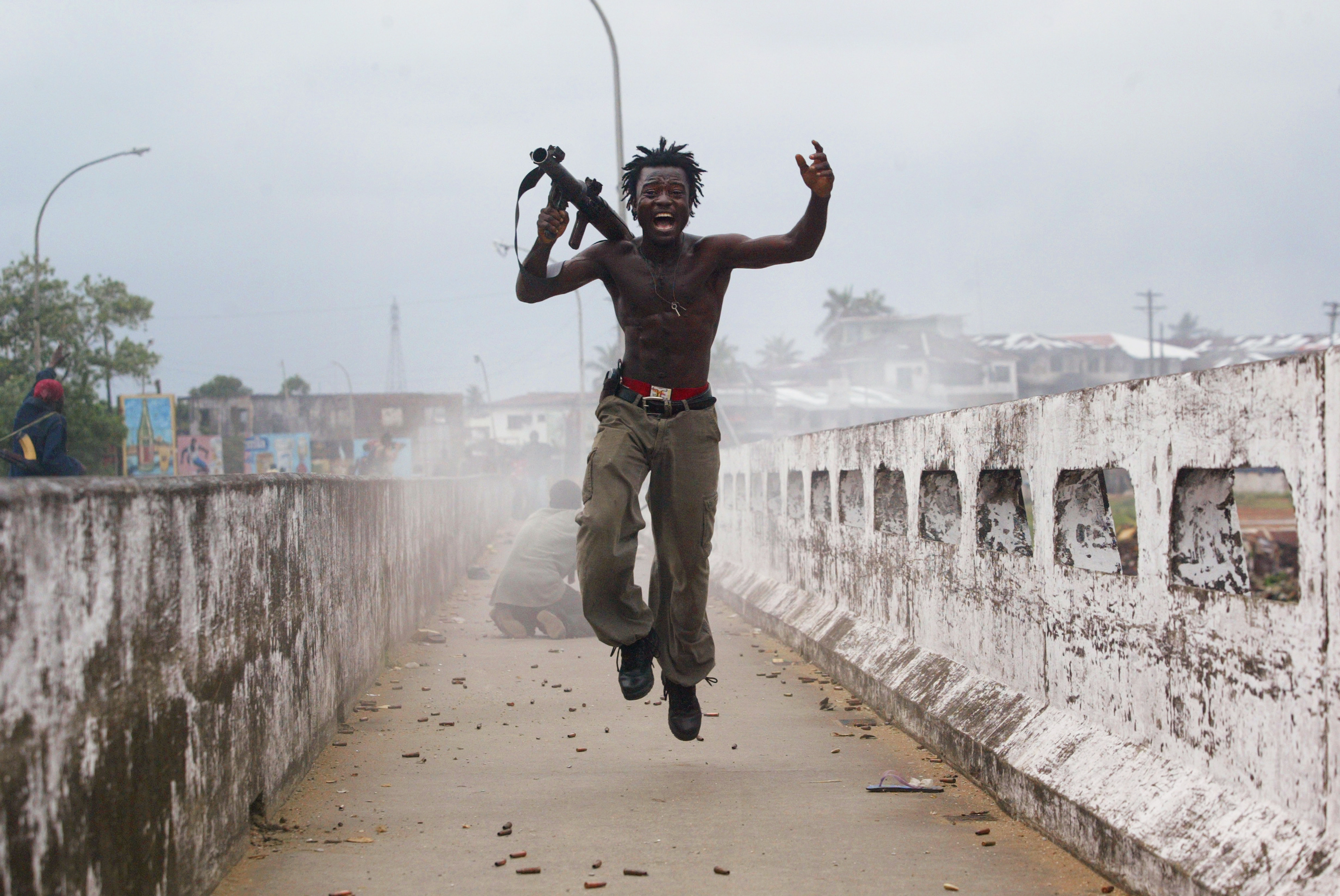 Joseph Duo, a Liberian militia commander loyal to the government, exults after firing a rocket-propelled grenade at rebel forces at a key strategic bridge, July 20, 2003 in Monrovia, Liberia. (Photo by Chris Hondros/Getty Images).

SAT OCT 20
3PM–5PM • FREE
TALK: Fascism at the Gates: Bolsonaro and the Brazilian Elections
Jair Bolsonaro, an explicit supporter of dictatorship, controversial for his racist, homophobic and sexist statements and widely interpreted as an actual fascist, is leading the presidential polls in Brazil and maybe the winner in a second round of elections on Oct. 28. Anarchist groups in Brazil, invited by Black Rose/Rosa Negra Anarchist Federation, will analyze the political moment from a libertarian socialist perspective and discuss strategies for fighting back.
Interference Archive
314 7th St., Bklyn

SAT OCT 20
7PM–10PM • $10
SPIRITUALITY: Ritual to Hex Brett Kavanaugh
The folks at Catland are embracing witchcraft’s roots as the magik of the poor, the downtrodden and disenfranchised, and its history as a weapon of exacting justice. Come put a public hex upon Brett Kavanaugh, all rapists and the patriarchy. Fifty percent of the proceeds will be donated to the Ali Forney Center and to Planned Parenthood. No one will be turned away for lack of funds.
Catland
987 Flushing Ave., Bklyn

SUN OCT 21
7:15PM & 9:15 PM • $22
SCREENING: Nosferatu with a Live Score
A masterpiece of German Expressionism, the power and beauty of F.W. Murnau’s unauthorized adaptation of Dracula has not diminished in the slightest almost a century since its original release. Watch it as musicians with Tenth Intervention provide the score.
Videology Bar & Cinema
308 Bedford Ave., Bklyn

MON OCT 22
7PM–9PM • FREE
PERFORMANCE: Decolonizing the Land, Decolonizing the Mind
Decolonizing the Land, Decolonizing the Mind imagines a more inclusive future in which indigenous and POC communities are thriving and creating alternative systems and technologies to protect people and the environment. Program includes a short performance by artist Maria Hupfield (Wasauksing First Nation), whose multi-media art reflects her resistance to Western essentializing of native artists as interchangeable producers of exotic cultural experiences. Performance followed by film screenings documenting projects by A Blade of Grass fellows whose artistic practices center indigenous artistic and ecological knowledge through collaborative dance, combat xenophobia against refugees, fight gentrification through Afrofuturist philosophies, and expose how racism is built into emergent artificial intelligence technology. Presented in conjunction with the exhibition “Mary Mattingly: What Happens After” (on view through Nov. 11).
BRIC
647 Fulton St., Bklyn

TUES OCT 23
7PM–9PM • FREE
PARTY: Presentation Party
Anyone is welcome to present anything they find interesting or simply come have a few drinks and learn something new at this monthly gathering.
Starr Bar
214 Starr St., Bklyn

WED OCT 24
6:30PM–8:30PM • $5
PANEL: The Path to a Post-Rikers NYC
Hope for breaking the brutal violence of Rikers Island with a 10-year plan to close the complex raises new questions on accountability, bail reform, borough-based jails, inmate release and the persistent inability to operate a humane criminal justice system, regardless of location. Experts from the CUNY Institute for State and Local Governance, the Mayor’s Office of Criminal Justice and the Vera Institute weigh in.
Brooklyn Historical Society
128 Pierrepont St, Bklyn