Perfect sponges, flaky pastries and chocolate seducing you out of yet another diet. Who doesn’t love a great baking show? The popularity of food television may be on a steady high but are shows doing a better job of representing minorities and women of color? Whose soufflé sinks the fastest when a show is canceled?

Vallery Lomas is a lawyer-turned-baker who you would’ve known as the latest winner of The Great American Baking Show had a twist of fate not awaited her. ABC pulled the show when multiple former employees accused judge Johnny Iuzzini of sexual harassment, leaving fans of the show with nothing to hold on to except dreams of Vallery’s orange chocolate donuts.

Born and raised in Louisiana, Vallery grew up in a family of bakers, surrounded by her grandma’s fruit trees and fresh preserves. She baked through law school and now you’ll find her blogging full time from her home in Harlem or eating her way through all the crêpe spots in the city.

We spoke to Vallery about the show, it’s sudden cancellation and life after.

The Indypendent: When did you find out the show wouldn’t air?

Vallery Lomas: The night before the third episode was going to air, I received a phone call. They said, “Hey, there were some allegations against Johnny Iuzzini and the network had to pull the show.” Within minutes of receiving the call, it was announced nationally.

It’s crazy because it felt like I broke through that glass ceiling before and now I’m back under it and keep hitting my head. But I’m happy too because I’m passionate about baking.

How did you end up on the show?

The casting director discovered my Instagram account and they sent me an email asking if I was interested in applying. I knew it would take a lot since I was working as a lawyer but I was already blogging. I owed myself a chance to take it to another level.

As an African-American woman, what was your experience on the show like?

I knew someone of African-American descent had never won the show. The Great British Baking Show, which the show was based on, had people of color win but never anyone of African-descent. When I won I knew it mattered. Growing up, it was always exciting to have someone to look for, have someone who looked like you on TV. You don’t always see people who look like you represented in media so I knew that it was something really special.

Of course, I never got to see the fruition of that. But the night that it did air [as a 90 second clip on the program’s Facebook Page], I had so many people reach out of me, saying, “I have a little girl and she has natural hair like you, she loves your spirit, she loves seeing someone who looks like her.”  That really meant a lot, that it wasn’t really about me, it was about this next generation of people who have the privilege of seeing someone who looks like them. To me that was the roughest part of the show being pulled, I knew that it meant something, that it mattered. It’s crazy that Iuzzini’s actions created a ripple effect for so many people.

Do you think women of color are being recognized in the food industry?

I definitely think some women are getting the recognition they deserve but at the same time, I think there’s a lot of rounding up. It’ll take time to tell.

What is your first food memory?

My grandmother lived in Prairieville, Louisiana, this little town right next to Baton Rouge where I grew up. She would give me figs straight off her trees and at 5, it was the best thing I’d ever tasted. Or I’d go strawberry picking with my dad and make preserves. Growing up in South Louisiana and enjoying the bounty of fresh fruit was incredible.

During the holidays my mother always had this tradition where we would bake family heirloom recipes. I grew up with my sisters and everyone had their own thing to bake. I always enjoyed it but I didn’t tap into it until the third year of law school when the recession was happening and I needed a creative outlet. I started blogging about baking and that encouraged me to bake every day.

What are you working on now that we can look forward to?

I’m working on a cookbook and blogging full time.

Do you have advice for women of color who are trying to make it as chefs?

I would say just stay true to who you are and remember why you’re here to begin with because you have this passion that you want to share with the world. That’s what I tell myself on bad days. 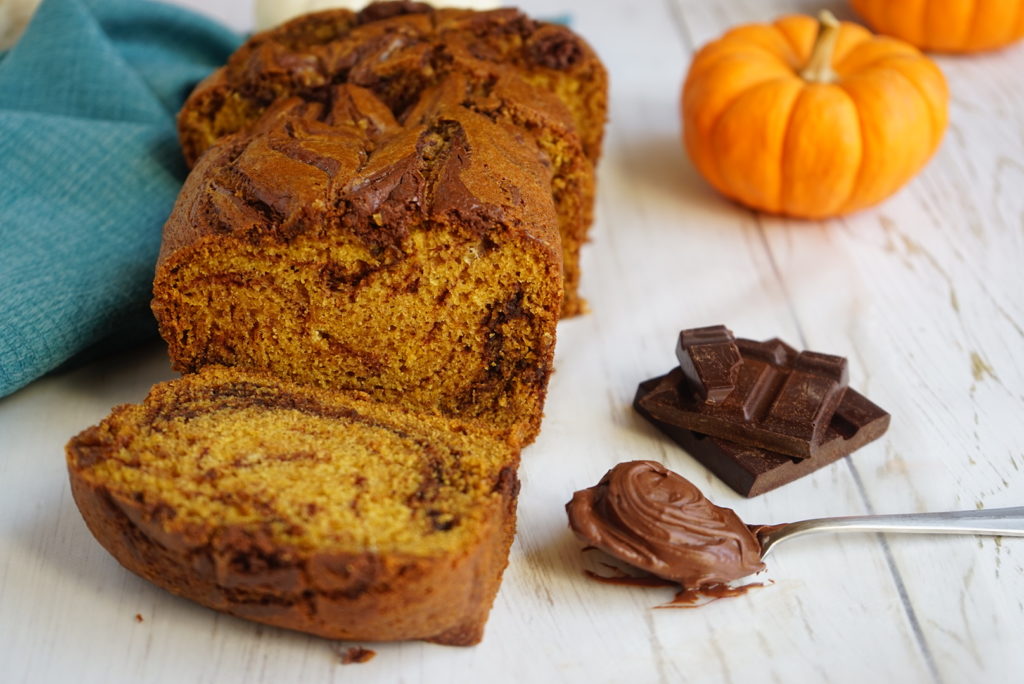 Butter, for coating the pan

2 Melt the chocolate by microwaving it at 10-second intervals, stirring until it’s melted.

3 Whisk together the flour, baking soda, cinnamon, baking powder, nutmeg and salt in a medium bowl.

4 Combine the sugar and oil in the bowl of a stand mixer fitted with a paddle attachment and beat on medium-high speed until combined, about one minute.

6 With the mixer running on low, slowly pour in the reserved flour mixture, and mix until just combined.

7 Remove the bowl from the mixer and drizzle all of the melted chocolate evenly over the batter, reserving about one tablespoon. Using a rubber spatula, fold the chocolate into the batter until it’s just swirled in, making sure to scrape the bottom of the bowl with each stroke, about 5 strokes total.

8 Carefully pour the batter into the prepared pan. Dollop the one tablespoon of reserved chocolate on top, and use a toothpick to create a swirl design.

9 Bake at 350°F until the bread is browned on top and a toothpick inserted into the center comes out clean, 60-70 minutes.