The main thoroughfare in Caguas, Puerto Rico, a city of nearly 150,000 people, remains desolate for hours at a time. Its buildings, ranging from pale pinks to bright orange and lime green, appear vacant. Many of the storefronts have boarded windows as if the shopkeepers left in a hurry and haven’t looked back.

Hurricane Maria hit Caguas, 19 miles south of San Juan, with the same devastating force that met other municipalities on Puerto Rico’s eastern coast. But for locals, it was a common sentiment that life in Caguas was already careening in an unsustainable direction well before last year’s hurricanes — Irma, followed by the even more devastating Maria — were even on the radar.

City blocks abound with vacant apartments, a situation caused not only by Maria but also in large part by landlords who are holding out for a flood of foreign investment. Puerto Ricans have long expected an influx of wealthy mainlanders in what some activists characterize as the island’s “third invasion.” Post-Maria, Puerto Rico is struggling under a new wave of austerity measures imposed by the Financial Oversight and Management Board — set up by Congress in 2016 to restructure its debt.

The island’s government is aiming to privatize its public resources and is incentivizing mainland investment in tech and the island’s tourism economy. Business elite from the mainland, ready to take advantage of tax breaks, arrive prepared to buy up entire blocks of land. Caguas’ convenient location, just inland from the big city, would be the next logical step in the line of gentrification — cheap property within driving distance of San Juan and world-renowned, pristine coastline.

‘In a world where you have no control over anything, at least you can paint a wall.’

The future looks bleak in Caguas. Just over 37 percent of the city lives below the poverty line, well above the national average of 14 percent. Homelessness and displacement have reached unprecedented levels in this small city, where the local economy has long struggled to compete with chain stores based on the mainland.

The situation is not dissimilar to that of Manhattan, where 20 percent of retail space remains vacant as property owners hold out for corporate tenants willing to pay rents mom-and-pop shopkeepers can’t. But Maritza Hernández, a member of the squatter collective Urbe Apie, compares Caguas to any “small town in America.”

“You know what happens,” Hernández says, pointing down an avenue of vibrantly colored, empty storefronts. “They put in a mall and they build a Walmart and then nobody comes to the [local] shops anymore.” According to Puerto Rico’s Centro De Periodismo Investigativo, Puerto Rico has a higher percentage of Walmarts per square mile than any U.S. state.

“And then if the [landlords] are not reasonable and they want really high rents, then nobody rents them,” Hernández explains. “That’s what happened here.”

Pinpointing the root of Urbe Apie’s mission, she says, “Nothing was more evident post-Maria. We cannot depend on the government, we cannot depend on anybody. If we don’t provide for ourselves, nobody is going to help us.”

It is difficult to say precisely what Urbe Apie translates to in English. One of the group’s founders, Omar Ayala González, characterizes the meaning behind the group’s name in poetic terms, as “an invitation to walk, to connect with spaces, to discover and activate them for the benefit of all.”

For Caguas residents whose poverty was exacerbated by the storm, community organizations like Urbe Apie played a life-saving role. Hernández estimates that soon after Maria Urbe Apie’s small team of volunteers “were feeding 400 to 500 people every day” out of their mutual aid center — one of dozens of grassroots, de-facto hurricane relief stations that sprang up across the island in the absence of federal relief.

Urbe Apie quickly shook its reputation as a collective full of “los pelúz,” she laughs. The phrase means hairy people, a common derogatory term for leftists in Puerto Rico.

Relationships were forged over hot meals. Volunteers coordinated trips to check on neighbors. The organization took over various vacant spaces throughout Caguas, utilizing them as distribution centers that formed a solidarity economy still thriving today.

The impact is evident. While it may seem unlikely that a predominantly young, loosely-organized urban squatter organization like Urbe Apie and citizens of this majority working-class city could maintain a productive relationship, that is precisely what happened.

After feeding so many people in such dire circumstances, “They’ll never forget you,” Hernández says and smiles. She exchanges greetings with everyone she passes in the street. For each of them, she recalls a compelling backstory.

“I watched her teaching students in the orchard,” shares Hernández as a middle-aged woman waves from across the avenue. Local students are required to complete “green hours” in order to graduate high school and Urbe Apie offers garden space to surrounding schools. “The way she talks about the herbs, the plants, ‘Here, touch this, smell this, isn’t it wonderful?’ I thought, ‘This woman is amazing.”

Besides its gardens and mutual aid center, Urbe Apie maintains a patchwork of squats that include a clothing exchange, a kitchen, a cafe, a gallery space, a library, a bicycle repair shop, living quarters and even a building where addicts can exchange needles. The organization has also worked to provide condoms for local sex workers. 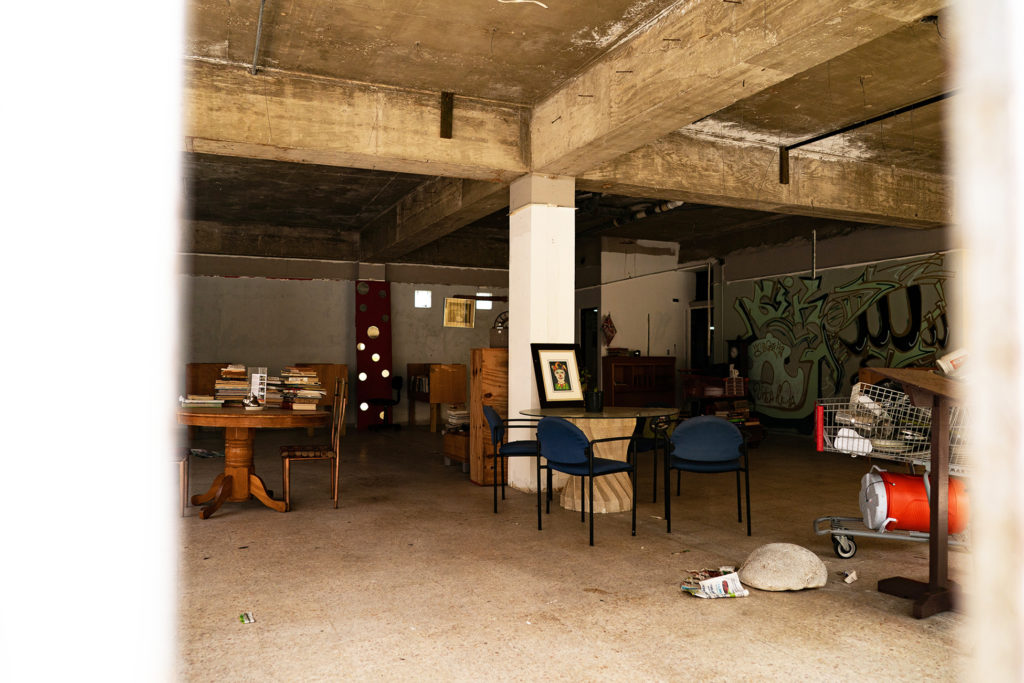 AN ALEXANDRIA Of THEIR OWN: Unlike the ancient library, Urbe Apie’s lending room has sprung out of ruin. Credit: Erin Sheridan.

In every space the organization occupies — on walls, on doors — there is poetry, murals of graffiti. Members regularly organize community art classes at one of the collective’s larger buildings. “In a world where you have no control over anything, at least you can paint a wall,” says Hernández.

Not all of Urbe Apie’s buildings are rented. Hernández — who describes herself in English as an “uncharacteristic” representative of the group because she, unlike many of her younger counterparts, has a background in contract negotiations — has been able to bargain with landlords.

When Urbe Apie does decide to squat at a location, it first carries out a thorough investigation before deciding to occupy the property.

“The Spanish were very good at keeping records,” says Hernández. “So everything that happens with the building has to be registered. We ask questions like, ‘Who’s the owner?’ ‘What’s going on?’ ‘What’s happening [with the property]?’ ‘Are they interested [in working with us]?’ We try to approach the owners sometimes if we know.”

Many landlords are simply choosing not to rent out unoccupied buildings, holding out for tenants willing to pay exorbitant prices as the island gentrifies. In Puerto Rico, squatting has long been a solution to the island’s housing crisis. Nearly one in five Puerto Rican homes are built illegally on abandoned government land. An estimated half of the island’s homes are built without official permission, a process that Hernández and others attribute to close-knit, family-based community networks through which land and property have been shared across generations.

abandoned, privately-owned properties. As long as the owners of the properties lay no claim to the unused buildings, or otherwise have no

intentions of renting them out, the collective says it is well within its rights to utilize the abandoned spaces for the sake of struggling residents.

Once Urbe Apie determines that the squatting is viable, members move in and begin to revitalize the space. At the collective’s largest building — housing living quarters, a bike repair shop, a library, a meeting space and two rooftop terraces — members have faced off with the law.

“The first time [the owners] came over with the lawyers and said, ‘If you don’t leave in five days we’re going to bring the police,’” says Hernández.

She and others knew that the owners would have to bring a court order to kick Urbe Apie out, so the volunteers decided to stay. This particular building, just past the city center, sits abandoned because it is the subject of an inheritance dispute and remains unclaimed by either party.

“Until then,” furthers Hernandez, “we don’t even know if the person coming over has any authority to kick us out because if it’s [in] succession, they need everybody to agree.”

The next eviction tactic the alleged owner took, according to Hernández, was to accuse the occupiers of theft. The police stopped by to let Urbe Apie members know that there were photographs of them “stealing doors.”

“Even the lieutenant of the state police came over,” she recalls. “Why would they mess around with some people taking a door from an abandoned place if there’s nobody claiming the door?”

Hernández describes her love for the building. The volunteers who live inside and maintain the adjacent orchard, she says, are even more attached to the place than her because they’ve created a home inside.

But she has a wider vision for Caguas. Hernández has submitted proposals to open a convenience store and has completed the construction of two community gardens in collaboration with neighbors. The collective will soon open a cabaret-style cafe, teatro and event space, El Reflejo, where local artists and musicians will exhibit work.

Hernández is perhaps more of a pelúz than she is aware. Though she presents an image akin to a professional working mom, she has, for instance, adopted a pigeon that she found dying and nursed back to health. It now flies around her house and sits on her shoulder when she goes outside.

She and other Urbe Apie members are nursing Caguas back to health as well. They maintain a positive outlook, embracing uncertainty as part of the uncharted territory of building the city up from the grassroots.

Puerto Rico can’t achieve a real recovery with do-it-yourself organizing. That will ultimately take the state mobilizing and directing the necessary resources. That’s not happening right now in Puerto Rico. For Urbe Apie activists and members of similar collectives that have sprung up amid the mutual crises of gentrification and hurricane devastation, theirs is not merely a struggle over squatting but is also about holding on to vital living spaces as the island shifts rapidly around them.

Occupation comes out of necessity.

“There is a phrase people use here when they occupy buildings,” Hernández says, staring proudly at a makeshift community garden next to the contested squat. “Aquí vive gente, ‘people live here.’”