Before we dive into our regular calendar we want to call readers attention to a special event taking place this Sunday, Dec. 2 at 2 pm. The Indypendent, its staff, volunteers and supporters, are going to be collectively granted sainthood in the Church of Stop Shopping by none other than the illustrious performer and Indy advice columnist Reverend Billy Talen.

Each week during their annual holiday run at Joe’s Pub (425 Lafayette Street), the choir takes a moment to anoint groups and individuals that they deem to be doing, if not the Lord’s work, something good for the planet and the people on it. We are honored that they have chosen to recognize the many people without whom our little rebel newspaper would not happen.

Leonard Cohen once remarked that a saint is someone who, far from flying with the angels, “traces with the fidelity of a seismograph needle the state of the solid bloody landscape.” Well, that doesn’t sound all that different from the job of a reporter in these turbulent times. We hope you’ll join us. Discounted $10 tickets available by entering the promo code CHANGENOW upon purchase.

FRI NOV 30
6:30PM–9PM • FREE
SCREENING: Blood in the Streets: The Battle of Sur
Based on news footage and live interviews, this is the untold story of how radical Kurds built a system they call “democratic autonomy” in Sur and other cities of northeast Turkey — a system based on pluralism, local control and full citizenship for women. The Turkish government found this level of democracy so threatening it responded by destroying Sur, killing or jailing many of its activists and dismantling the structures they had put in place for women’s liberation. This film will be followed by discussion with Ozlem Goner and Meredith Tax.
The CUNY Graduate Center, Segal Theater
365 Fifth Ave., Mnhtn 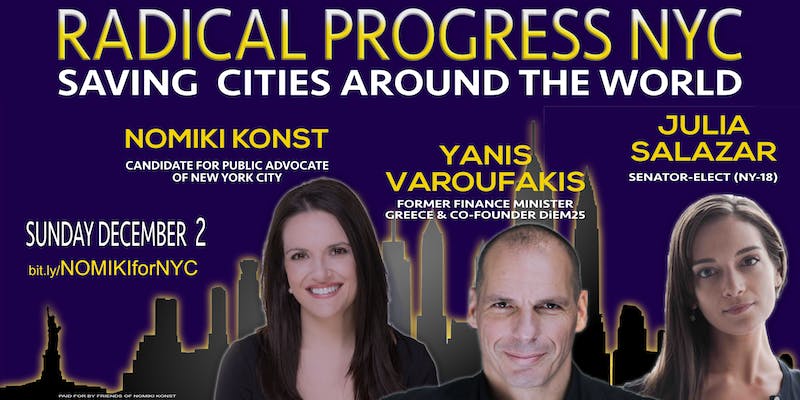 WED DEC 5
7PM–8:30PM •  FREE
BOOK LAUNCH: A Writer of Our Time: The Life and Work of John Berger
Drawing on first-hand, unpublished interviews and archival sources only recently made available, Joshua Sperling explores the life of one of the most influential thinkers and writers of postwar Europe. As a novelist, Berger won the Booker prize in 1972, donating half his prize money to the Black Panthers. As a TV presenter, he changed the way we looked at art with Ways of Seeing. As a storyteller and political activist, he defended the rights and dignity of workers, migrants and the oppressed around the world.
McNally Jackson Books
52 Prince St., Mnhtn

DEC 5–DEC 9
WED–SAT 8PM, SAT & SUN 3PM • $13–$18
PERFORMANCE: Bread & Puppet: The Or Else Opera
A paper maché puppet opera, punctuated by melting ice drops under a starry sky made of garlic. Composer Hanns Eisler enters the 21st century, with its giant fears and overcrowded spirit, at a moment of re-occurring fascism.
Theater for the New City
155 First Ave., Mnhtn