Perhaps it is dengue, perhaps it is malaria. Maybe it’s African sleep fever. It is definitely some kind of fever that has the governor and the mayor in a joint state of delirium.

Normally these kinds of illnesses are contracted in the Amazon not when Amazon comes to you. But there you have it, Andrew Cuomo and Bill de Blasio, two normally bitter antagonists, would be holding hands if they didn’t need both arms free to shovel what turns out to be $3 billion the company’s way in return for hosting its HQ2 — one of them anyway — in Long Island City.

“[T]hese two executives could not get together to help struggling NYCHA tenants or to fix public transportation, but were able and eager to arrange this deal,” City Councilmember and Public Advocate candidate Jumaane Williams noted in a statement, summing up the feelings of shock and awe churning in the stomachs of many New Yorkers at the sight of the sudden lovebirds together.

‘They are trying very hard to give the people of New York virtually no say about this deal.’

The third amoureux in this ménage à trois, Amazon executive John Schoettler, didn’t even bother to wear a suit on their first date. Instead, in typical Silicon Valley fashion, he sat there in a fleece while Cuomo and de Blasio grinned at him like school children in their ties and tailored sports jackets. As the two most powerful politicians in the state pledged fealty to the trillion-dollar corporation at their Midtown press conference on Tuesday, all that was missing was one of those giant checks they hand Lotto winners.

Schoettler, of course, was just a stand-in for Jeff Bezos, Amazon’s CEO and the wealthiest individual in the world. Bezos and his company will be receiving $1.7 billion in subsidies from the state and another $1.3 billion from the city in exchange for settling in Long Island City, but he couldn’t be bothered to show for Tuesday’s announcement. When you are worth an estimated $137 billion, it must take more than a lousy $3 billion to get you out of bed in the morning. 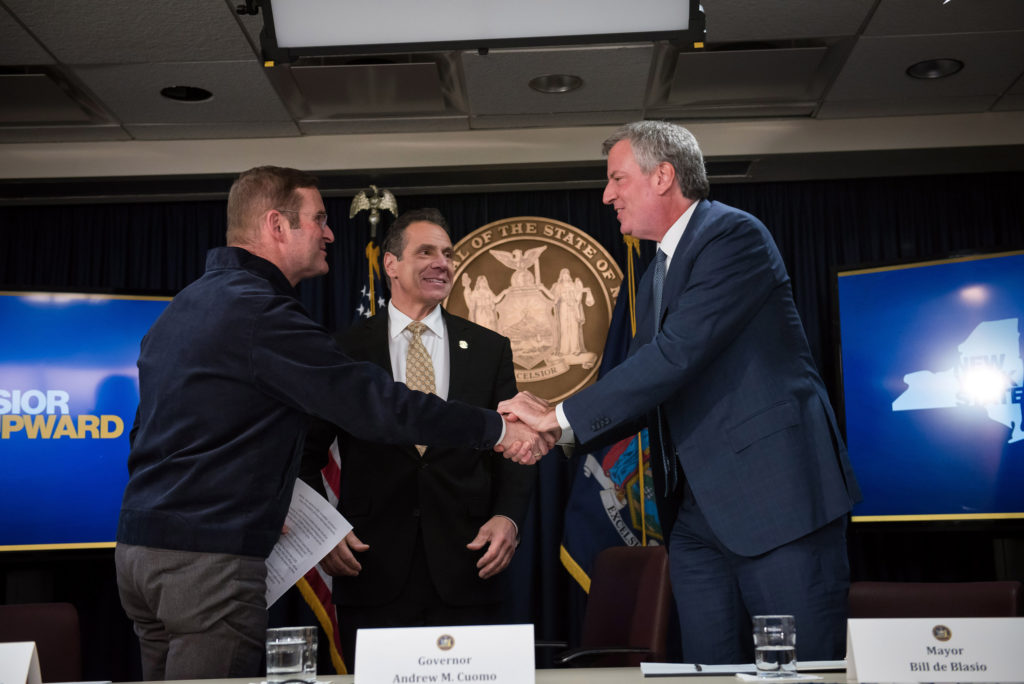 Yet while the giveaway might be chump change to Bezos, it means a lot to taxpayers — as evidenced the following day in Long Island City. On a stretch of Vernon Boulevard lined with construction supply companies, auto-body repair shops, the odd greasy spoon and a defunct gentleman’s club near where Amazon will soon move in, a very different scene from the glad-handing show of corporate and state partnership that transpired in Manhattan took place. Brown boxes bearing Amazon’s smiling swoosh logo, only turned upside down into a maniacal frown, surrounded state and local politicians, members of community groups and nearby residents who gathered at Gordon Triangle. Together, they denounced the arrangement, which, they pointed out, was devised in secret and still has not been made fully public.

The City Council “couldn’t be trusted to grease the wheel for Jeff Bezos,” Councilmember Jimmy Van Bramer remarked. Amazon, Cuomo and de Blasio apparently only have eyes for each other, after all.

After signing a nondisclosure agreement to submit their bid to host the company, the mayor and the governor worked out a deal with Amazon to bypass the city’s Uniform Land Use Review Procedure (ULURP). You’re probably thinking, anything called “ULURP” can’t be very sexy and you are right. In fact, it is a deeply flawed and messy process. It is, however, a more transparent procedure than the one Cuomo and de Blasio have devised. It allows for local community boards, borough presidents and the City Planning Commission to weigh in and offers the City Council veto power over land use decisions like this one.

Instead, de Blasio and Cuomo are pushing the project through the state’s executive branch using discretionary funds. The maneuver cuts elected leaders on the council and in the state legislature, as well as their constituents, out of deal.

Councilmember Ben Kallos who represents Roosevelt Island and a portion of the Upper East Side, which will likely absorb a share of the aftershock from Amazon’s arrival in neighboring Queens, conceded that the council had approved developments over the vocal objections of communities in the past. But, he told The Indypendent, some checks and balances are better than none at all.

“Right now, we know nothing,” Kallos said. “The community knows nothing. The deal is being cut in secret. There’s nondisclosure agreements. I’m learning about what’s happening not from government, I’m learning about it from the press.”

“What is so special about Amazon?” State Sen. Michael Gianaris wondered allowed..

It’s a more than fair question given that Google is in the process of generating what will amount to 20,000 jobs in New York City and has so far not sought a single real estate tax credit.

Amazon’s promised 25,000 jobs, meanwhile, come at a price of $100,000 each. Assuming the reported average Amazon salary of $150,000 a year is accurate, New York has essentially agreed to return the personal income tax revenue it will collect from Amazon’s employees over the roughly ten-year period it will be doling out the subsidies.

But the governor and the mayor assure the public the company will generate $9 worth of economic activity for every $1 they have spent attracting it. Where that figure comes from is anyone’s guess. But no number has been put on the cost of the manufacturing jobs Amazon will likely displace nor on the strain the company’s arrival will put on Long Island City and the surrounding area where, as in much of the city, a housing and transportation crisis is underway. 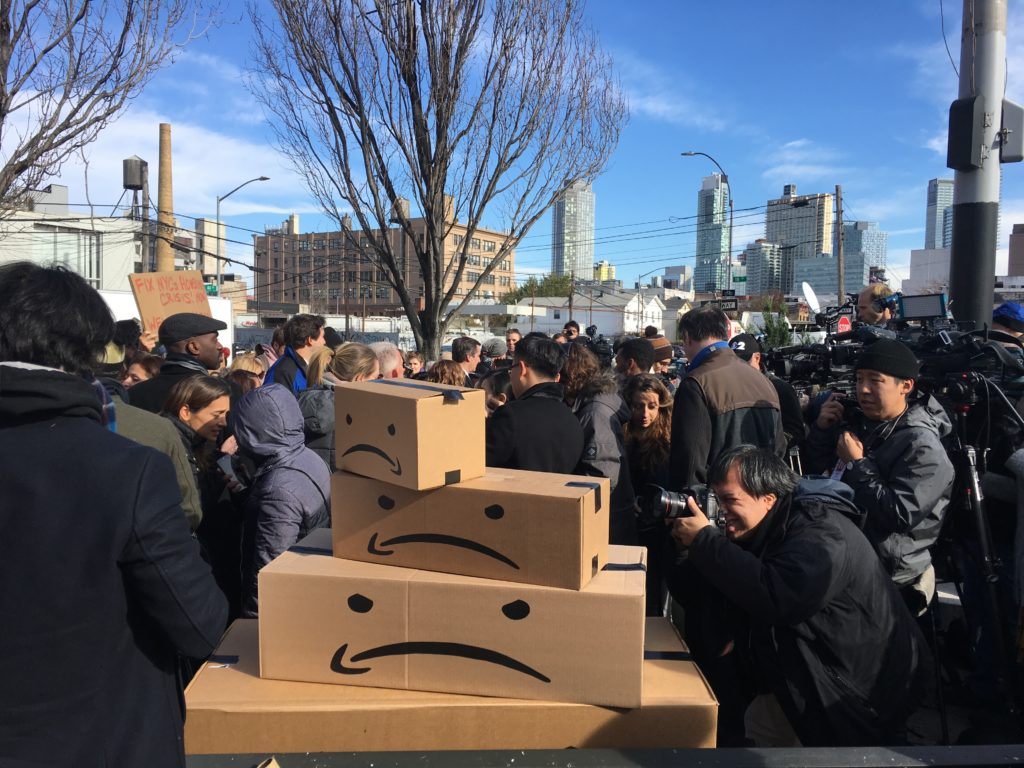 Anti-Amazon props at a rally in Queens, Wednesday.Credit: Samuel McMullen.

“If you go down to the Vernon 7 train stop during the morning rush hour, there are people piled up there not just on the platform, not just on the steps but onto the sidewalk,” said Gianaris. “Parents from Court Square fight with parents from Hunts Point over kindergarten seats. Rents are going up. And yesterday, just as this deal was announced, the predatory speculators came to town and started buying up apartments via text message without even seeing the apartments. The point is, the infrastructure of Long Island City is already being stretched to its limits. This is a community that is bursting at its seams.”

Asked about the burden the company’s arrival will put on the city’s aged, delay-plagued transit system during the Amazon lovefest on Tuesday, Gov. Cuomo, who controls the MTA, passed the buck to de Blasio. He, in turn, sang the praises of the city’s fledgling ferry system, already subsidized to the tune of $7.25 a ride. If you think the trains are crowded in the morning, try riding a boat to work.

Incidentally, when Bezos deignes to come to town, it’ll be via helicopter, landing on a helipad also generously subsidized by New York City taxpayers.

Meanwhile, just a few blocks from the site that will host HQ2, Councilmember Van Bramer said his constituents living in the Queensbridge public housing had contacted him Wednesday morning complaining that their apartments had no heat. “But somehow, folks that consider themselves progressive Democrats have seen fit to throw $3 billion dollars at the richest man in the world,” he said.

State Senator-elect Julia Salazar, who will represent nearby Greenpoint, Brooklyn come January, pointed out that the state still owes public schools in long-underserved regions of the city and state billions of dollars.

As she and other politicos, surrounded by a torrent of cameras, spoke in Long Island City, gruff Queens accents interjected here and there from the crowd. Their comments indicated the mixture of cynicism, anger and fatalism gripping the neighborhood since the announcement of the Amazon deal.

“Amazon sucks, capitalism too,” one person called out. “You can’t stop these guys,” grumbled another. “Pig motherfucker,” shouted a passing cyclist, spitting on the ground as he said it in the direction of a lone man at the crowd’s rim who held a “Welcome Amazon” sign in the air. Murmurs of impeachment arose whenever de Blasio’s name was mentioned.

“We will go to court if we have to,” Sen. Gianaris said. “We will take legislative action if we have to. They are trying very hard to give the people of New York virtually no say about this deal.”

Just how much more of a fight our elected leaders would put up if given a say in the subsidy package was a matter of some debate among the community groups who turned up on Wednesday. “This is wack,” said Jonathan Bailey, a member of the Queens Anti-Gentrification Project, noting that Gianaris and Van Bramer had both signed letters encouraging Amazon to come to New York just months earlier. In a way, by bypassing the legislative bodies, the executives saved lawmakers the trouble of having to wade into the weeds of the issue.

There were also public signs of fissures in the emerging anti-Amazon coalition on Wednesday. Councilmembers Vanessa Gibson of the Bronx and Brooklyn’s Stephen Levin both said they wanted a better deal, while others denounced Amazon entirely.

City and state lawmakers who have pledged to do what they can to challenge the subsidy package have limited options. The City Council can try to eliminate the tax incentives promised Amazon but such maneuvers would also likely strip tax breaks from other companies receiving them as well. The financial oversight boards that will likely review the deal are largely controlled by Cuomo. The state legislature could put a cap on the governor’s Excelsior tax credit program but many in Albany are ready to roll out the Amazon welcome mat.

The other half of the battle against Amazon will likely be waged in the streets through protests, sit-ins and a public pressure campaign against the company in the months ahead. That’s where hope of breaking up the corporate-state-city love triangle just might lay.