How bad could it get? Every day it seemed the President joked about violence or threatened it. Speaking at rallies or on TV, he poured his authority into the deepest fears of his followers and told them to attack his enemies. They heard him. In Pittsburgh, a right-wing fanatic killed 11 in a synagogue. In Manhattan, the white nationalist Proud Boys hit protesters like punching bags. I got hate mail calling me an “ugly nigger”.

Hate crime spilled blood across America. It made voting, feel like a life or death act. Standing in line at the polling place, a heavy urgency emanated from the Black poll monitors, gay couples, liberal gentrifiers and Latino construction workers. We were saving our own lives. And the life of the nation. I voted and left, knowing it was just one turning point in a long, drawn-out struggle of what it means to be American.

Two Americas are on a collision course. The conservative one erected a wall around itself, the progressive one is growing fast and needs more space. Every election, they smash against each other because Republicans already built Trump’s wall, just not at the border. They built it around the voting booth.

In every state the  future bubbles up from the chaotic mix of peoples in the cities trying to break the nostalgia for the past in white rural areas.

The Republican Party rigs elections it can’t win. They’ve created interlocking walls to stop Democrats. The oldest is felony disenfranchisement. Nearly six million people who served time have been stripped of the vote. After that, the next wall came in 2013, when the Supreme Court gutted the Civil Rights Act that forced states with a history of racism to clear any voting changes with the Federal Government. In less than 24 hours, politicians, tripped over each other to enact laws to stop Black voters. Texas, Mississippi and Alabama enacted voter ID laws. They purged voters from the rolls. Thousands of polling sites were closed.

Republicans want to destroy democracy because if let be, democracy would destroy them. It seems odd to say. They have the White House, the Senate and a majority of state legislatures If you look closer, Republican power is a chimera. The red state base is shrinking and dying. In 2016 Trump received almost three million fewer votes than Clinton but won the electoral college. In this year’s midterms, the Democrats won the cumulative national vote from all 435 congressional races by about seven to eight points and narrowly flipped the House. In the Senate, which confirms all federal judges, Democratic candidates won 45 million votes to the Republicans 33 million, but the GOP actually gained seats.

The Republican Party is dying and so is the America they represent. They are mostly white, two- thirds Christian and many are evangelical. They are aging. They are less educated in a hi-tech era. They are slipping backward in time as the world moves on. When they see the future, it frightens them. Trump and the party elite have nothing to offer them but a wall. It doesn’t have to be real, just a metaphor to express the siege mentality of Red State America. If they keep building it, one day they’ll discover themselves trapped inside.

The nail-biting night of the midterms, I studied the political map of America and saw cities erupting like blue volcanoes in red plains. Every state, had this rural-urban divide where the future bubbles up from the chaotic mix of peoples in the cities trying to break the nostalgia for the past in white rural areas.

The future is here but it can’t break into the present. Two main reasons explain why. First, the Democrats get more votes but don’t win beyond the urban bubbles. In six of the last seven presidential elections, Democrats won the popular vote by millions. The gap between parties will grow. It’s the geography of Future America that holds it back. Clustered in cities, it leaves vast swathes of heartland out of reach and in the red. 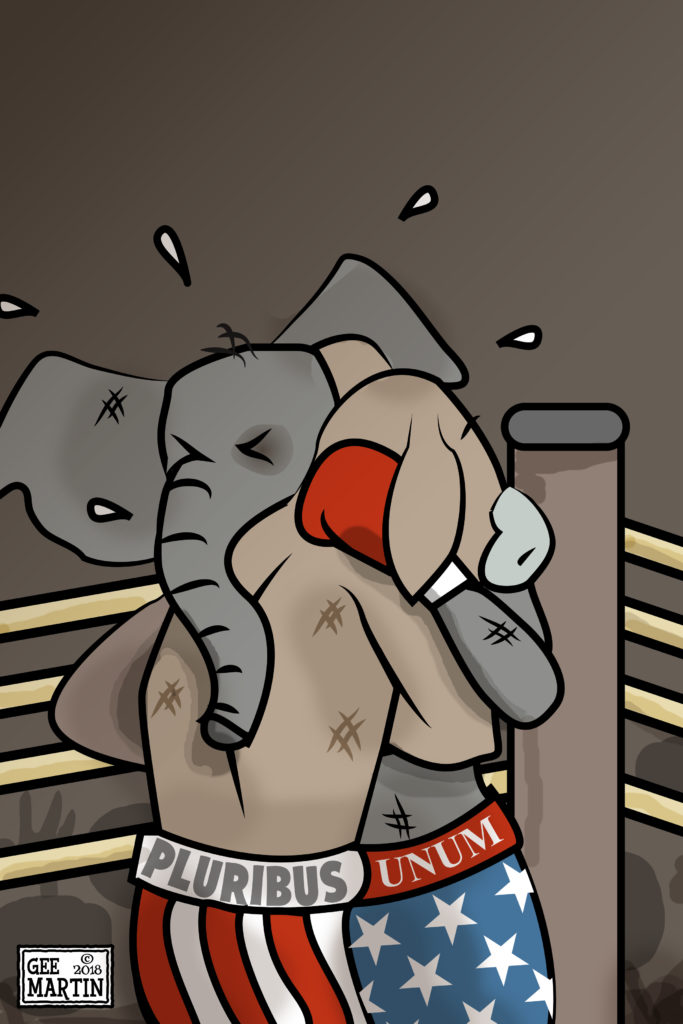 Future America is also kept back by the inner dynamics of the Democratic Party. Thomas Frank, mapped how from the 70’s, Democrats shed the working class to chase the white collar crowd. The courtship was fulfilled by Bill Clinton. Obama put a ring on it. In this neoliberal era, cultural identity was more palatable to college-educated voters, not working class politics. It caused a divide to grow that Democrats papered over with rhetoric and milquetoast reforms. Increasingly, frustrated workers were caught in a voting trap; vulture capitalist Republicans on one side, technocratic centrist Democrats on the other. Terrified of Republicans, they gave money, time, work and votes to the Democrats, who splurged on consultants who seemed to be really good at losing.

And they lost. Big. Obama left a skeletal party in his wake. During his terms, conservative Democrats, especially on race and immigration, left for the Republicans. Early in the 2016 campaign, reports were coming out that union members eyed Bernie or Trump for help, not Hillary Clinton.

Now, Future America is slowly, resurrecting a progressive wing in the broken Democratic Party led by figures such as Alexandria Ocasio-Cortez. It is more liberal on race. It is more liberal on social spending. Yet, it faces downward pressure from the nucleus of centrist elites embodied by Chuck Schumer and Nancy Pelosi. It faces the arduous work of transforming non-voters into voters to build a new base that will send progressive policy into the halls of power.

The day after the midterms I found that every face, every conversation had a mix of relief and disappointment. Sure, it was better than before. Who wants Trump rampaging through the White House with no chill and nearly zero resistance? Even so, where was the goddamn Blue Wave? Liberals on shows, podcasts and articles said it came but I looked at the map and saw red everywhere.

But it was better. As the new reality set in, I realized with this small victory came a chance to size up what the past two years of one-party government had been. I could sum it up in one word. Fear. Increasing every day. Fear.

Seeing Trump on TV, rage against refugees, threatening to shoot them or take away birthright citizenship; all of it sent volts of fear through us. His every wild whim was magnified by the halls of power like a bullhorn. And his followers — from rally MAGA hat fans to neo-Nazis to the Proud Boys — sprang up to terrorize the majority, the Future America. Strutting in 19th Century beards or black leather or Trump 2020 shirts, they looked tough and scary, so much so, it was easy to miss how terrified they were.

Behind the wall, Red State America tears itself apart. It’s like a Tracy Chapman song. They are poisoned by a reactionary ideology that abets a racist projection of their worst fears on to us. When they beat us, shoot us, vote against us; they are attacking their own shadows but we live with scars.

We are faced with multiple crises. Both political parties are being upturned by an internal class war. In the Republican Party, the working class won a pyrrhic victory. They embarrassed the elite by thrusting a blowhard village idiot into the White House but were betrayed just the same. The “beautiful” new healthcare system and the robust defense of Social Security Trump promised, well Senator Mitch McConnell just said they were on the chopping block to pay for the tax cut he pushed for GOP’s billionaire donor class.

In the Democratic Party, the millennial working class faces a neoliberal consensus that has been rattled but not broken. They have the deep work ahead of bringing the millions of non-voters, the young, the poor, people of color and the less educated into the voting booths. It is a new base that if it materialized, could support real progress. They have to work a corporate media that is suspicious of socialism at best and hostile to it at worse.

All this political work comes amidst the increasing devastation of climate change, increasing automation as artificial intelligence becomes our co-worker and as white America continues its downward spiral into panic. The United States will drift from the global center as a multi-polar world rapidly emerges in the wake of Trump’s nationalism. The dollar may not be the international reserve currency. Our growing national debt could break the federal budget. Somehow amidst all of this chaos, progressive forces have to steer the nation.

I remember when I first had hope after Trump’s election. Not just rage. Hope. It was when he tried to enforce the Muslim Ban and thousands showed up at airports to protest. It felt like a new social contract was being written in the chants and signs and actions. Every protest since from the ones to stop family separation at the U.S.-Mexican border to the ones to stop Kavanaugh’s Supreme Court confirmation has been done in a similar spirit.

Every wall creates a spillover. The wall rising in Brazil, Hungary, Britain, wherever they rise, the people do too.