Alexandria Ocasio-Cortez holds up a copy of The Indypendent following her primary win this summer. Credit: John Tarleton.

“Holy Smokes! Our campaign is the FRONT PAGE STORY of NYC’s classic monthly, @The Indypendent,” Alexandria Ocasio-Cortez tweeted on June 2 when we released our new edition.

Ocasio-Cortez was still almost four weeks away from the historic primary victory over Queens Democratic Party boss Joe Crowley that would make her a national star. Her insurgent grassroots campaign was being studiously ignored by the city’s political and media establishment. But our on-the-ground reporting in her working-class immigrant district told us something big was brewing.

So we broke the silence and put Ocasio-Cortez on our cover. And then we moved 45,000 copies across the city including 15,000 in her district so that voters would know they had a real choice for the first time in years.

This was only possible because of the generous backing of readers like you.  And we need your support more than ever as we continue to expand our reach and our coverage.

Since fall 2016, we have tripled our print circulation by placing Indy street boxes across the city. We also have a beautiful new website that is regularly updated with original content between issues. We are now airing a weekly newscast on Monday evenings on WBAI-99.5 FM, producing podcasts, news videos and hosting public events at our home at the Brooklyn Commons.

Look for it on a sidewalk corner near you all month long!

If you find one, snap a pic and @ me – this one’s from @analisacantu pic.twitter.com/LHOFQp7Fuq

The Indy’s growth comes as much of the establishment media is collapsing and a rogue administration propagandizes relentlessly on behalf of a “post-truth” reality that appeals to people’s worst impulses.

It’s easy to feel overwhelmed at a time like this, but the antidote to despair is acting on one’s most deeply held beliefs. That’s why we’re continuing to step up. We’re not just printing more copies; we’re filling them with great content. 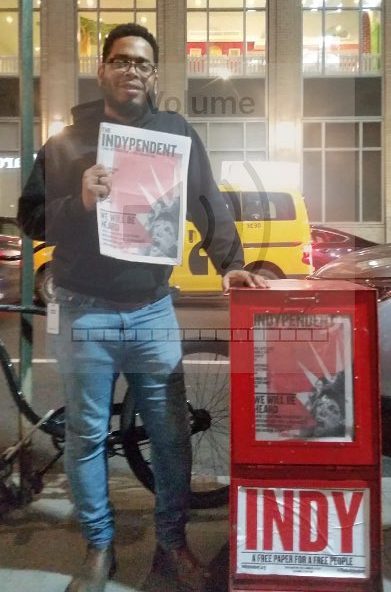 Over the course of 2018, we have covered the impact of immigrant deportations on separated family members, looked at the race to the bottom that has wrecked the NYC taxi industry and sent driver suicides soaring, championed the cultural revolution that confronted Brett Kavanaugh, provided a comprehensive guide to the voter uprising against New York’s corrupt state government that saw numerous pro-corporate incumbents kicked to the curb and much, much more.

We’ve kept a blistering pace and want to do more in 2019. But we can only sustain this growth with the backing of more readers like yourself.

So if you believe a free and fiercely independent media is more important than ever and want to support our work, please stand with us today, Giving Tuesday, and give generously. Every $50 you give allows us to print another 500 papers, every $100 another 1,000 papers. If you give $250, we can purchase and install another Indy street box.

You can make a one-time donation or recurring donation or sign up to become an Indy Patron. Whatever you can give makes all the difference. On behalf of everyone who works on The Indy, thank you for your support.