That is the day, far-right president-elect Jair Bolsonaro will take office. He won on Oct. 28 with more than 55 percent of the vote.

Bolsonaro is no ordinary politician. He is a former military captain and three-decade-long congressman who has been fined for sexist, racist and homophobic remarks. He has praised torture, Brazil’s former military dictators, Chilean dictator Augusto Pinochet and Donald Trump. He has promised violence against his foes, be they criminals, the corrupt, or his political adversaries.

During a campaign rally in the state of Acre, he pretended a tripod was a machine gun and told cheering crowds that they were going to “execute” Workers Party supporters there.

“We’re going to run these crooks out of Acre,” he said.

His election threatens to push the country toward authoritarianism not seen since the country’s last military dictatorship ended in 1985.

Bolsonaro has vowed to fight crime with an iron fist and do away with left-wing activism. His future finance minister plans to push privatizations and free-market reforms, which has international investors salivating.

Half of Brazilians say dictatorship could return.

Teachers and students are concerned their right to study freely will be curtailed. Bolsonaro has called for the teachings of Paulo Freire — the late Brazilian educator who wrote The Pedagogy of the Oppressed — to be banned. He has backed the controversial “School Without Parties” program that, if approved, would limit debate and opinions in the classroom and prohibit discussion of gender and sexual diversity.

Leftists, social movements, feminists and members of the LGBT community are afraid for their safety and even their lives. In the month leading up to the October 28 election, four deaths and more than 120 cases of political attacks and threats were reported, mostly perpetrated by Bolsonaro supporters.

How could the fifth most populous country in the world intentionally vote itself back into the dark ages?

The answer is multifaceted.

“The guy is awesome. Totally awesome. And he says it like it is. He’s not fake at all,” said  Leinilson Carvalho, an Uber driver in Brazil, in the opening days of the electoral campaign. “This is a lawless country. We need Bolsonaro to come in and put these bums in line that have been stealing from us.”

In the wake of Brazil’s worst economic recession and largest corruption scandal ever, Bolsonaro rode a wave of anti-Workers Party sentiment.

From 2002 through 2016, the Workers Party won four consecutive presidential elections, with a focus on increasing rights for traditionally marginalized communities and tackling Brazil’s massive inequality.

The program was highly successful. Millions were lifted out of poverty with education and social programs. When former president Luiz Inacio Lula da Silva left office in 2010, he had an approval rating approaching 90 percent.

But in 2014, the price of commodities tanked, sending the Brazilian economy into a tailspin. Revelations broke of a massive corruption scheme involving Brazil’s state oil company Petrobras. The investigations have taken down dozens of top politicians from across the political spectrum. The Workers Party received the brunt of the blame in Brazil’s media, which is dominated by right-wing oligarchs. This, in turn, was to make the case against all Workers Party policies and any “leftist” ideas.

Bolsonaro claimed to be the antidote and warned that a return of the Workers Party would be a vote for corruption, something he has promised to clean up across the country.

His candidacy resonated with many among the middle class and the elites who never embraced the Workers Party policies of wealth redistribution and always felt resentment that their privileges were being stripped away.

Also at work was a culture war over the very values that should guide the country. It’s been fought in evangelical churches across the country. Evangelicals now make up a quarter of the country. They overwhelmingly backed Bolsonaro, lifting the fight against abortion, feminism and LGBT rights to the fore.

“[Bolsonaro] defends our ideals. He’s against abortion and for family values. So we see in him someone who is one of us,” said Diego Valentin da Silva, a pastor at Rio de Janiero’s Victory in Christ Assembly of God Malafaia, one of Brazil’s most influential televangelists.

The country was also split along race and geographic lines. The South, with large white populations descended from German and Italian immigrants, voted strongly in favor of Bolsonaro, while the poorer majority-Black Northeast states — which overwhelmingly benefited from the Workers Party poverty alleviation programs — voted for Workers Party candidate Fernando Haddad.

In a press conference in São Paulo, days before the first-round vote, Haddad denounced an onslaught of misinformation and slanderous attacks against himself and his campaign being pushed on social media and, in particular, over the messaging application WhatsApp — a major means of communication for a majority of Brazilians.

In mid-October, the Folha de São Paulo newspaper revealed that businessmen were paying millions of dollars for pro-Bolsonaro fake news messages to be sent illegally to people across Brazil over WhatsApp. The country’s top electoral court admitted that it was not prepared to regulate information in this new age of social media and distorted news. 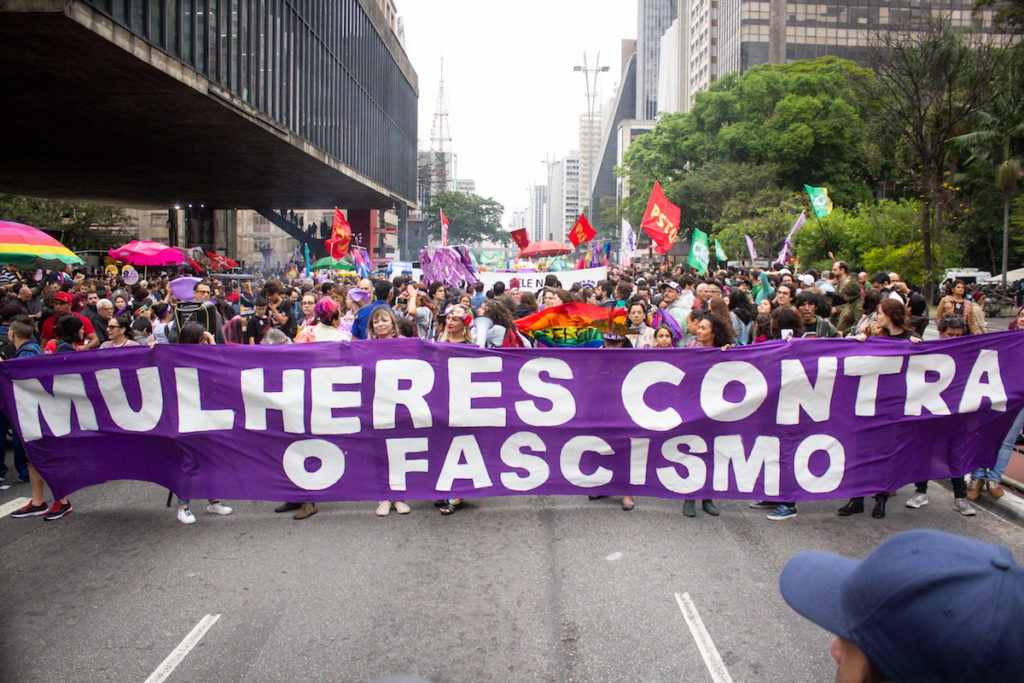 Brazilian women have been at the forefront of opposition to far right President-Elect Jair Bolsonaro. Credit: Romerito Pontes.

If the fake news onslaught sounds familiar, that’s because it is. As in the United States, influential members of Brazil’s far-right have been pushing their worldview and opinions over social media, and in particular, YouTube.

Chief among them is journalist turned astrologer turned homegrown far-right philosopher Olavo de Carvalho. Since 2005 he has trained thousands of young Brazilians through his online “philosophy” courses.

His theories are conspiratorial and revisionist. He believes there is a global left-wing plot to take over the world and that Hitler and the Nazis were leftists. Bolsonaro is a major fan. According to news reports, the president-elect even asked Carvalho to head the Ministry of Education, although he declined.

These ideas have created an alternate reality, challenging facts and long-held truth. They also convinced millions of Brazilians that the Workers Party was truly at the root of all of Brazil’s woes.

Bolsonaro’s election did not occur in a vacuum. Brazil’s far-right was inspired by the election of Donald Trump and extremists elsewhere. In August, Bolsonaro’s son, Eduardo — himself a highly popular congressional representative — met with Trump’s former campaign strategist Steve Bannon. Eduardo wrote that Bannon had agreed to offer advice to Bolsonaro’s team.

In 2016, Brazil’s Congress, which itself was swimming in corruption, impeached Workers Party President Dilma Rousseff in a move that was widely considered a congressional coup. The incoming government of Michel Temer — Rousseff’s conservative vice president — formed a coalition with the traditional right-wing PSDB party and unleashed a wave of unpopular neoliberal reforms, budget cuts and privatizations. Temer spent much of 2018 with an approval rating around 4 percent after he and top cabinet members were embroiled in numerous corruption scandals.

In the months leading to the election, former president Lula was seen as the way out. He led all of the polls despite a controversial corruption conviction that sent him to jail in April to serve a 12-year prison sentence.

There is not enough room here to describe the details: the political bias by the prosecutor-judge overseeing Lula’s case, Sergio Moro; the lack of any concrete evidence in his written decision to convict Lula, and the media circus that spun an image of the former president as the kingpin of corruption in Brazil. But Lula remains in jail — considered by many to be one of the world’s top political prisoners — while Moro has accepted a post as the Minister of Justice in Bolsonaro’s incoming government.

Lula supporters and some international analysts called his conviction the second phase of the 2016 coup, and a tool to block Lula and the Workers Party from returning to power.

This, it did, on August 31, when Brazil’s Supreme Electoral Court ruled that Lula would be barred from running. The new Workers Party candidate, Haddad, picked up the majority of Lula’s supporters, but others jumped on the Bolsonaro bandwagon, in the same way that some supporters of Bernie Sanders backed Trump over Hillary Clinton in the 2016 elections: They were willing to support a charismatic leader who they believed could put the country on track, but not a mainstream party they did not necessarily trust.

The scene was set.

In his book, The Anatomy of Fascism, historian Robert O. Paxton describes the elements often present with the rise of a fascist movement: political crisis or corruption scandals; blame of Communists or the left; the rise of an authoritarian, yet charismatic outsider with a violent discourse against certain groups, who promises to unite and fix the country; the creation of an alternative worldview that questions long-standing beliefs and facts.

It is a perfect description of Brazil at this moment and what may be in store for the country.

“Bolsonaro campaigned like a fascist,” Federico Finchelstein, a history professor at New York’s New School for Social Research, told The Indypendent. “The big question, that we will learn sooner than later, is whether he will rule like one, or like an authoritarian populist … Will he be a Pinochet or a Trump?”

According to a Datafolha poll in mid-October, half the country believes there is a chance of returning to a dictatorship. The country has a long history of undemocratic rule and military regimes. The most recent ran from 1964 through 1985, under which hundreds were disappeared and killed, and tens of thousands more were tortured or sent into exile. Bolsonaro served under the dictatorship. His vice president-elect, Hamilton Mourão, is a retired army general.

Regardless of what it may do, the Bolsonaro regime will have a green light to take action in the form of tacit support from the United States.

Exactly one month after Bolsonaro’s victory, U.S. National Security Advisor John Bolton visited the president-elect at his home in Rio de Janeiro, where they discussed diplomatic sanctions against Venezuela and Cuba and moving the Brazilian Embassy in Israel to Jerusalem. He invited Bolsonaro to meet Trump.

There is no doubt that this is what they will have.

There will be resistance. In the lead-up to the vote, millions of women rallied under the hashtag #EleNão (NotHim). Social movements marched. Students protested. They have promised to be in the streets. But there are major concerns about how the government will respond. The ghosts of the past have yet to be reckoned with. The future is unknown.

Michael Fox is a Brazil-based freelance multimedia journalist. He is the former Editor of the NACLA Report on the Americas. He tweets at @mfox_us.