In the late 19th century, horses hauled wood culled from North America’s great forests in order to heat and power cities. Over 100,000 workhorses begrimed New York City’s streets with millions of pounds of manure and 100,000 gallons of urine each day. By 1900, the country largely moved off wood to heat homes and horses began to diminish, but a new menace of black smoke appeared.

For backers of a Green New Deal, Richard Rhodes’ new book on the history of energy reminds us that dramatic changes in how our civilization produces and consumes energy have occurred before and can happen again. Rhodes, who is best known for his Pulitzer Prize-winning The Making Of The Atomic Bomb (1986), tells a story of one form of energy supplanting another — a slow decarbonization spanning industrial development. In 1870, burning wood accounted for 70 percent of total energy needs but by 1900 coal became king. Growing reliance on coal for industrial production and also domestic usage befouled the world’s air. 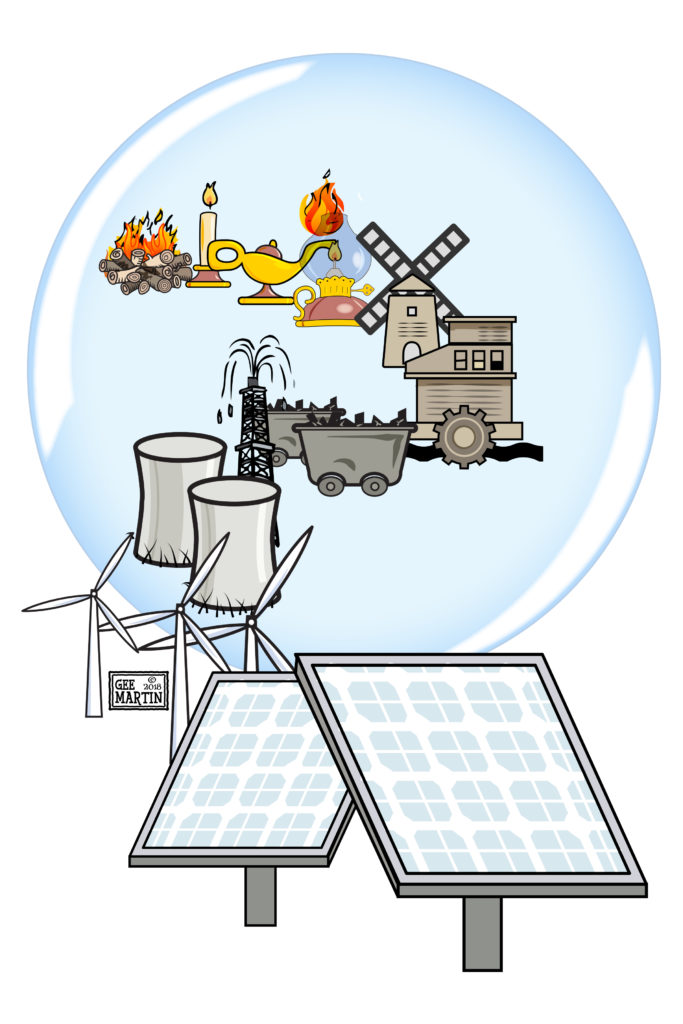 Pittsburgh features prominently in Rhodes’ book. My father-in-law, born in the city during the middle of the previous century, recently recounted that his father’s department store recommended employees bring an extra shirt to change into at work because the very air soiled their white button-downs during their commutes.

The struggle over the future of energy can seem esoteric, but by turning to the past Rhodes is able to enliven the subject with people, events, times and places that keep you turning the page.

Many industrialists populate Energy, like inventor and early General Motors executive Charles Kettering. In 1911 Kettering created the electric car ignition that allowed many women who had difficulty using hand cranks to drive cars. He also helped eliminate “engine knock” (high pitched rattling) by raising the octane level in gas. There are also more familiar characters, like United Mine Workers President John Lewis who presided over the coal strikes of 1945 and 1946, another transitional moment in the history of U.S. energy usage.

The strikes, Energy states, were partly waged over the conversion of Texas-based oil pipelines to natural gas. The pipelines extended into the Northeast, where most cities produced a coal-derived fuel called “town gas” for local consumption. Natural gas would compete against town gas. The United Mine Workers of America won economic gains from the strikes but the pipelines switched to natural gas following year.

Natural gas burns cleaner than coal. However, fracking, the drilling process commonly used to access natural gas reserves buried deep in the earth, yields high levels of methane, a potent greenhouse gas, and poisons the air and water of adjacent communities. Meanwhile, King Coal is by no means obsolete. At current domestic demand the federal government estimates U.S. recoverable coal reserves will last another 325 years. Keeping it in the ground is essential to check global warming.

Is nuclear power a part of the solution? Rhodes is a longtime proponent of it and answers in the affirmative. For environmental activists who thought they killed off the nuclear power industry and its lethal dangers 40 years ago, reviving it as a green, eco-friendly alternative to climate apocalypse is practically no choice at all.

Reactors deliver tremendous energy capacity and allow for greater urban and industrial development but can be cost prohibitive. The Nuclear Energy Agency estimates that a new one-gigawatt nuclear power plant that can power 750,000 homes costs around $4 billion to construct. That is a lot of wind turbines, geothermal systems and solar panels that could be built instead.

Rhodes references the 1967 Sierra Club commissioned book The Population Bomb to link what he sees as environmentalism’s anti-human “neo-Malthusian” fear of overpopulation and resource consumption to nuclear power opposition. Reticence to nuclear energy production has been intimately tied to the atom bomb’s awesomely destructive power and reactor meltdowns and waste. Starting in the Eisenhower years, the federal government promoted the growth of the domestic nuclear power industry under the banner of “Atoms for Peace” while also presiding over a growing Cold War nuclear arsenal.

“Fear of radiation and misunderstanding of its effects were powerful drivers of anti-nuclear sentiment,” Rhodes writes. “Activists encouraged this response over the years with claims that a meltdown would destroy an area ‘the size of Pennsylvania’ (Ralph Nader) or that ‘nearly a million’ had died from Chernobyl fallout (Helen Caldicott, the Australian physician).”

Just 31 people died from acute radiation exposure in Chernobyl and lower levels of radiation are difficult to directly link to mortality but the World Health Organization (WHO) estimates another 4,000 died due to lower radiation levels from the 1986 meltdown. By contrast the WHO estimates ambient air pollution caused 4.2 million deaths worldwide in 2016. Rhodes will garner more support for nuclear in relation to global warming and health. He cites NASA stats that global nuclear power prevented an average of 1.84 million air pollution-related deaths and 64 gigatonnes of CO2 released into the atmosphere since 1971.

Lastly, Rhodes argues nuclear waste disposal is a political but not intractable technical problem and that a 1,300-foot-deep cavern in Carlsbad, N.M. could “easily accommodate the entire world’s nuclear waste for the next thousand years.” Like solar panels, nuclear power plants only release greenhouse gases during construction and decommissioning but produce zero emissions once constructed. Unlike solar, nuclear power plants get their energy source from open-pit uranium mining, a carbon-intensive, water-consuming, poisonous process.

Amid growing concerns about climate doom, Energy ends optimistically by arguing that the United States could decarbonize its economy if it chose to do so. In other words, the technology, money and engineering exist to radically decarbonize. The only thing missing is political will.