In early January, Mayor Bill de Blasio announced a program intended to expand health coverage to the city’s 600,000 uninsured people. It’s a sound, low-cost progressive policy concept but many of the people it aims to aid might not be around to reap its benefits.

Appearing on MSNBC’s “Morning Joe” program Jan. 8, the mayor pledged to “guarantee health care for New Yorkers who need it.” He said the plan, dubbed NYC Care, will “revolutionize” the way health care is delivered, reaching the 600,000 New Yorkers — largely undocumented immigrants and middle- to low-income residents who, despite the Affordable Care Act, lack insurance.

“This is one, universal way to reach all those folks right now who are not covered,” de Blasio said.

The plan is not universal or single-payer health care. NYC Care is an attempt to treat members of the city’s uninsured population by providing them care on a sliding scale, preferably before they are forced to make costly visits to hospital emergency rooms.

Set to be rolled out in the Bronx this summer and be in operation citywide within two years, the plan involves the city’s hospital network, Health + Hospitals, hiring a slew of new primary-care physicians and establishing a hotline to connect patients to the care they need, including mental health treatment.

The de Blasio administration is saying, “‘If you’re an undocumented immigrant or you can’t find coverage that is affordable for you, we’ll set up a program that walks like insurance, talks like insurance, but is not insurance,’” Elisabeth Benjamin, Vice President of Health Initiatives at the Community Service Society of New York, told The Indypendent.

Yet while NYC Care might alleviate one dilemma facing patients that universal health care would also tackle, the insurance void, single-payer supporters have a much broader set of concerns. 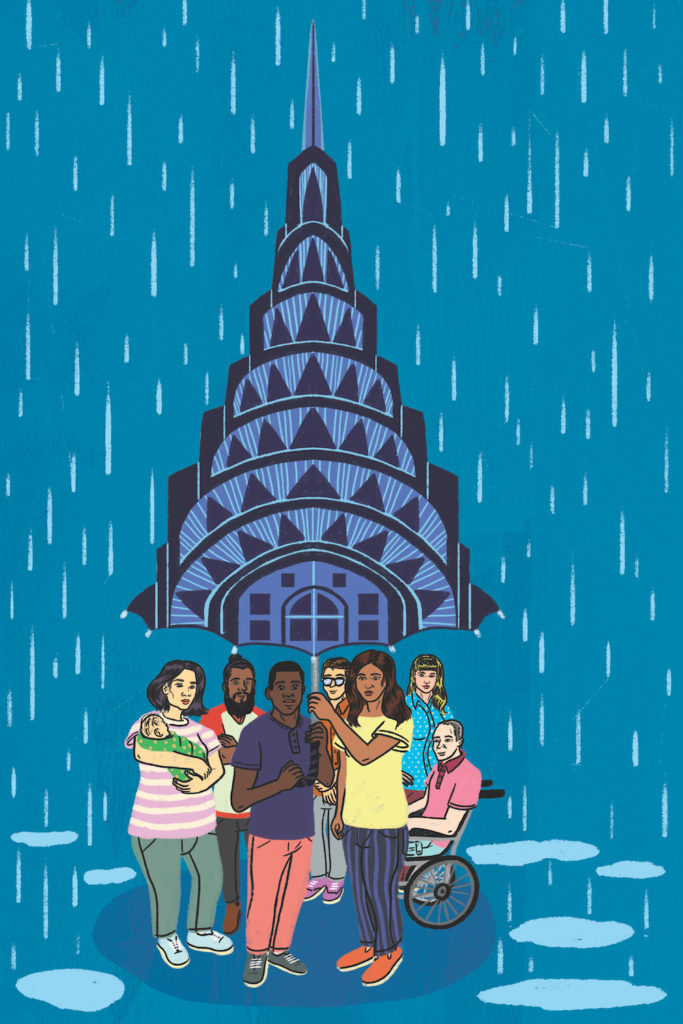 “They’re sick and tired of a health-care system that costs out the patients; that has deductibles and copays, and every time you go in the hospital you come out with 20 different bills from various providers and nurses and radiologists and $100 Band-Aids,” said Benjamin. Single-payer, currently before the state legislature in the form of the New York Health Act, would benefit insured and uninsured alike.

NYC Care is more likely to help undocumented immigrants, who are ineligible for publicly subsidized health coverage, than the working-class uninsured, who make too much for the state’s $20-a-month Essential Plan, but not enough to afford Obamacare. The administration wants to bring them into the city’s MetroPlus public-option insurance, but its prices are similar to Obamacare’s: A BronzePlus plan, which costs about $450 a month before the Obamacare tax-credit subsidy, has a deductible of $4,000 for individuals and $8,000 for families.

So de Blasio’s critics on the far right, eager to paint his every maneuver as a stride toward full communism, are more than a tad off the mark. The real whopper to come out of the mayor’s mouth, however, arrived a few days later in January, when he explained how he planned to pay for the program: Amazon.

“One of the reasons I believed that the Amazon plan was so important for New York City is because it is going to bring in a vast amount of revenue,” the mayor told Hot 97’s “Ebro in the Morning,” in reference to the deal he and Gov. Andrew Cuomo engineered with the company to put its satellite headquarters in Long Island City, bypassing oversight from the City Council and state legislature. “That’s going to allow us to do things like this.”

That assertion highlights a central contradiction of de Blasio’s time in office. The mayor counts universal pre-K, a raise in the minimum wage, paid sick time and likely soon paid vacations among his achievements — but the rampant gentrification he has presided over threatens to cancel out many of those accomplishments, including NYC Care.

De Blasio plans to build or preserve 300,000 units of “affordable” housing by 2026. But to do so, his administration has pushed through rezoning neighborhoods to allow taller buildings. Only 25 to 30 percent of the apartments in those new buildings are required to be “affordable” —which is defined based on the metropolitan area median income, a hefty $93,900 a year for a family of three.

Amazon’s move into Queens will only exacerbate the housing crisis in the borough and the rest of the city, argues state Sen. Jessica Ramos, who represents Elmhurst, Jackson Heights and Woodside, the neighborhoods east of Long Island City. NYC Care might help those priced out of insurance, but Amazon could end up pricing those same folks out of the city.

“Those who need health care the most are of course our most vulnerable,” Ramos, a former member of the de Blasio administration, told this reporter. “These are exactly the same folks who would be displaced when Amazon comes to Long Island City.”

Ramos is a proponent of the New York Health Act, as is her former boss. But, “assuming the worst,” she said, “assuming that we don’t pass single-payer on the state level, then the folks who would need it the most wouldn’t even be able to live in the city of New York anymore.”

On top of an approximate $1.7 billion from the state, New York City is providing Amazon with roughly $1.3 billion in tax breaks and subsidies. NYC Care will cost the city an estimated $100 million annually, but that’s not all that the tax revenue Amazon generates will bankroll, according to the mayor. He claims taxes from the 25,000 white-collar workers the company says it would hire will also pay for public-housing improvements and more affordable housing.

Yet many of these would-be Amazon employees already reside in the city and pay taxes. While these professionals will likely be compensated generously, why New York City would pay for the cost of health care, housing or any other social program on their backs — instead of taxing their employer, the wealthiest company on earth — is hard to fathom.

Ramos and Assemblymember Ron Kim (D-Queens) are introducing a bill to phase out corporate welfare completely in the next five years and put the savings toward student-loan forgiveness. It’s a novel idea these days, giving resources to those who need it by taking them away from people who don’t.