The Indypendent’s events calendar comes out every Wednesday online and once a month in print. Sign-up for our regular e-newsletter and you won’t miss a thing. If there is an event you want others to learn about let us know. 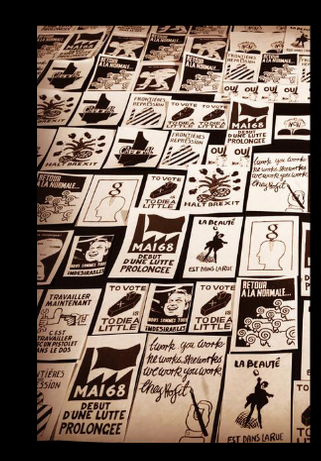 THRU AUGUST
MON–SUN, 1PM–7PM • FREE
EXHIBITION: Paris68Redux
A paste-up project conceived of by UK-based artists Dominic McGill and Michael Collins that aims both to re-present the graphic work of the Atelier Populaire, created during the Paris Student Uprising in 1968, and to continue in that agitprop tradition by addressing present-day issues.
Depanneur Wines
292 Livingston St., Bklyn

FRI FEB 15
6PM–8PM • FREE
EXHIBIT LAUNCH: PELEA
Work from artists grappling with the violence of hyper-speculation and displacement unfolding throughout the city. Working through performance, photography, drawing, painting, and sculpture, these artists engage the lived experience of spatial precarity from individual experience to collective resistance. On view through May 3, 11 a.m. to 7 p.m., Monday to Friday.
King Juan Carlos I of Spain Center at NYU
53 Washington Sq S., Mnhtn

SAT FEB 16
3PM–6PM • FREE
MUSIC: Songs in the Key of Resistance
Held on the third Saturday and first Monday evening of each month, Songs in the Key of Resistance (SKOR) is a cross-movement space for New Yorkers to create community through singing and to support each other in working for justice. Learn songs and chants to share at demonstrations. Bring your songs and an instrument if you play. On Saturdays, bring food to share for a potluck.
The People’s Forum
320 West 37th St., Mnhtn

SAT FEB 16
4PM–6PM • FREE
TALK: Dead Right: Conservatism After Trump
American conservatives have entered a crisis decades in the making, and they’re taking the rest of us down with them. New School historian Julia Ott, CUNY political theorist Corey Robin, and Dissent Magazine co-editor Timothy Shenk consider what the American left — including, and perhaps especially, its surging socialist wing — has to learn from the successes and failures of conservatism in the age of Trump.
63 Fifth Ave., Mnhtn

SUN FEB 17
1PM–4PM • $0–$25
FOOD: Love Your Neighbor: Lunch and Discussion at YAMA
Meet Debbie Almontaser and other change makers behind the Yemeni American Merchants Association, a one-year-old organization whose incredible birth story is the result of the Yemeni Bodega Strike that drew thousands of people to Brooklyn Borough Hall in response to President Trump’s Muslim ban. Join the Muslim Community Network and the Muslim-Jewish Solidarity Committee to hear YAMA stories and enjoy a delicious Yemeni lunch.
YAMA
6740 5th Ave., Bklyn