Although 24 states currently mandate gender equality in their Constitutions, the U.S. Constitution does not. But that may change — and relatively soon — if feminist activists are able to push the Equal Rights Amendment to the 38-state threshold needed for it to become law.

The original ERA was introduced in 1923 by suffrage activists Crystal Eastman and Alice Paul (who recognized that winning the right to vote was merely the first step) in reaching gender parity. The current Amendment — it has been modified several times over its storied history — is short and straightforward: “Equality of rights under the law shall not be denied or abridged by the United States or by any state on account of sex.”

Momentum, however, is building and despite a mid-January defeat in Virginia, activists remain hopeful that the ERA will finally be ratified.

Not surprisingly, this has rattled right-wing groups and they are wasting no time in decrying the ERA and its supporters. Anne Schlafly Cori, the daughter of Phyllis Schlafly, whose Eagle Forum succeeded in derailing the Amendment in the 1980s, is currently the chair of the group her mother founded. Like her mom, she sees the ERA as “a bad amendment” and has lobbied and spoken out against it. Her argument is that feminism hurts women. “Feminism has had a terrible effect on making women unhappy and their lives worse off. Equal rights is (sic) not about equality and any effort to enforce equal rights hurts women,” she wrote on the Forum webpage. 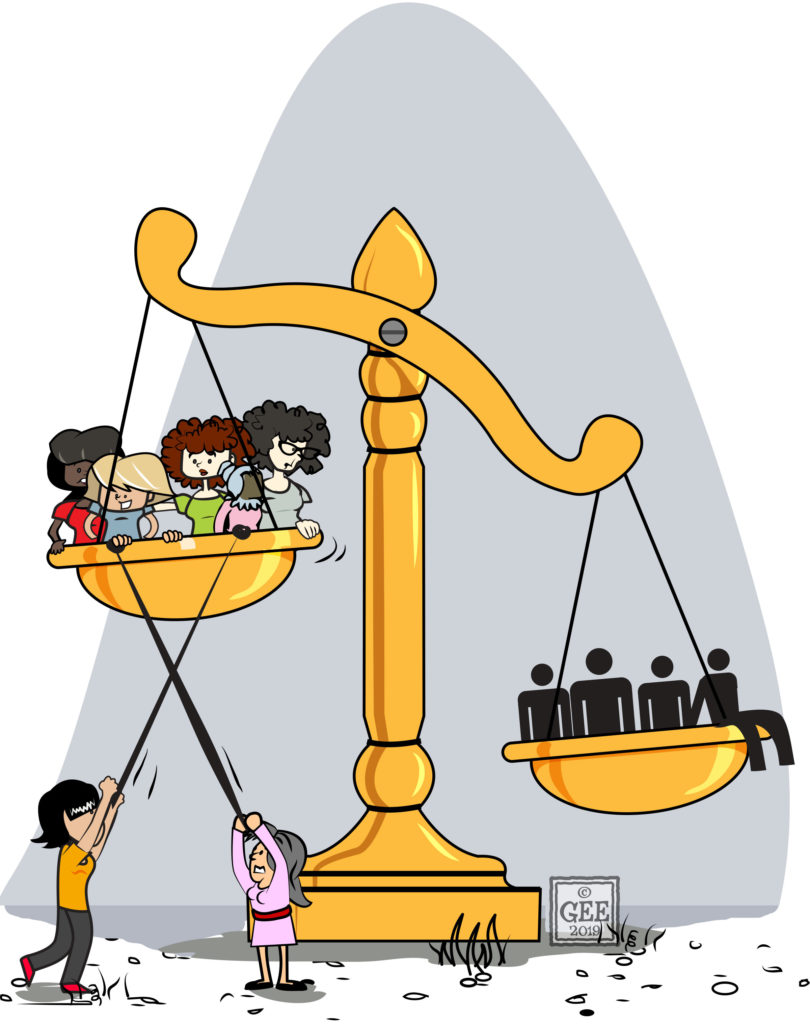 Her colleagues, conservative evangelicals all, have also derided the ERA, dubbing it a “constitutional foothold for abortion” … a “weakening of [women’s] hard-won rights [in order] to advance the abortion industry.”

These hard-won rights, they argue, include numerous pieces of protective legislation that keep women out of harm’s way, including insulating them from having to register for Selective Service at age 18. They also fear that the ERA will limit who can receive Social Security Survivor’s benefits.

Kati Hornung, campaign coordinator of VAratifyERA, calls these statements ridiculous but adds that backers of the amendment have focused on the fear-mongering and abortion panic that have been promulgated by conservatives, addressing each item point by point.  “In October 2017, the Pentagon recommended that women register for Selective Service,” she begins. “They made this recommendation apart from the ERA. And women already have a legal right to abortion. Furthermore, since 1975 Social Security has been inclusive, giving all surviving spouses access to Survivors’ benefits. What conservatives are warning about is essentially already the status quo.”

But despite their ability to rebut the right’s assertions, roadblocks to the ERA remain and progressive activists understand that even after a 38th state passes the measure, litigation is likely.

Alice Paul who, together with Crystal Eastman, crafted the first Equal Rights Amendment, introduced in 1923. Credit: Library of Congress.

Here’s why. When Congress passed the ERA in 1972, it went to the legislatures of all 50 states. These bodies were then given seven years, until 1979, to approve or reject it. For a while, passage looked promising, with 35 of the necessary 38 states voting in favor of amending the Constitution before the ratification deadline. Then, as the deadline neared, feminists successfully pushed Congress to give the states until June 20, 1982 to vote.

It was at this point that the ERA sputtered and ultimately stalled. Still, feminists persisted and continued to demand Constitutional equality. Their efforts paid off, and 35 years after the second deadline came and went, on March 11, 2017, Nevada became the 36th state to support amending the U.S. Constitution to include an Equal Rights Amendment. A little more than a year later, Illinois followed suit, voting yes on the ERA in May 2018.

“Our lawyers tell us that it is possible to remove the deadline,” Carol Jenkins, co-president and CEO of the ERA Coalition/Fund for Women’s Equality told me. “It was extended once already so Congress can do away with the deadline.”

Indeed, precedent for this exists: The 27th amendment, governing Congressional pay hikes, was first proposed in 1789. Two hundred and three years later, in 1992, it was ratified.

What’s more, Jenkins notes that coalition lawyers believe that another oft-cited obstacle, the fact that five states — Idaho, Kentucky, Nebraska, South Dakota and Tennessee — voted to rescind their initial support of the measure in a bid to appease the right — is a non-issue. “Courts have not looked kindly on efforts to undo what a whole state has voted to support,” Jenkins says.

Ellie Smeal, president and co-founder of the Feminist Majority Foundation, agrees and adds that the legal experts she’s consulted with believe that neither time limits nor rescissions are binding. In addition, should another state vote in favor of the ERA, Smeal says that supporters will then demand ERA certification.

“After the 38th state passes the ERA,” Smeal explains, “the measure will go to the National Archivist, David S. Ferriero. He does not have jurisdiction alone, but can ask for guidance from the Department of Justice. We believe that the drum is beating for us. We see the grassroots movement growing, growing, growing. The public support is there. The ERA will address the unfair pay gap, discrimination in educational programs, in mortgage lending and finance. Things won’t change overnight, but once we have the ERA, the country will have decided once and for all that women are equal and valuable members of the U.S. population.”