For more, see “Bernie Lost. That’s No Reason to Give Up.”

Who knew Bernie could dance so well? On the Ellen Show, Drake’s “Hotline Bling” aired and an actor playing the senator just got down. He dipped, stripped his jacket off and got spanked. The audience fell out laughing.

Now in 2019, Bernie runs again but in a richly diverse presidential race. The field is packed tight with female senators and senators of color. Can progressives, identify with an old, white, straight male? Isn’t he passé? The answer is yes, we can. Unlike the others, whose liberal identity politics mask a moderate agenda; Sanders strikes fear into Wall Street. The people know it. They won’t care if he’s white, old, straight or male, they will simply transform his image into their own. They’ll own Bernie.

“It’s hard to catch lightning in a bottle twice,” David Brooks said on PBS NewsHour, “He was the shiny new penny but now there are a lot of people with the same policy positions. You would think a younger, more diverse version of Bernie Sanders would be the ticket.” He’s right. Other candidates lip-sync Bernie’s New Deal platform, they say some form of Medicare for All and free college but add the powerful symbolism of being the first woman or woman of color or a minority president.

In a warped form of political Tinder, voters can swipe left or right for candidates who look good until you read their records. Here’s Sen. Kamala Harris holding handcuffs, saying, “Want to go to jail?” Swipe left. Here’s Sen. Cory Booker eating a salad made of money saying, “Wall Street has been good to me.” Swipe Left. Here’s Sen. Kirsten Gillibrand lost in a hall of mirrors that give back a reflection of Hillary Clinton. Swipe left.

Bernie’s the last one. In every photo, he rages at the machine, his hair flying. In the oldest one, he’s a young man in a black-and-white photo arrested for protesting racial segregation. And then you fall in love again. Bernie. Swipe right.

I’ll Be Your Mirror

“We are all in this together,” Bernie said on CNN, “The truth is … when you hurt when your children hurt, I hurt. I believe that’s what human nature is.” In six words, he summed up his philosophy. We are living mirrors, reflecting one another until dehumanizing ideology teaches us to toss away people like garbage. His philosophy was in action in 2016 when he campaigned in the Brownsville Housing Projects in Brooklyn. A reporter asked why, he said, “It is absurd to have 38 percent of African American children living in poverty.”

Bernie’s face, mirrors our reality. His furrowed brow or sucked-in lip reflect the impatience or sarcasm that are etched deep into him by years of anger at a cruel system. His feelings at inequality reflect ours. It creates a magnetism that pulls us over differences in skin color or culture and lets buried hope rise to the surface. You find yourself rooting for a man who looks nothing like you. But somehow looks at the world the way you do.

At the 2016 rallies, I saw thousands of enthusiasts wearing Bernie hats, Bernie shirts, Bernie signs and Bernie hairpieces. They so identified with him, they wore his name and hair like sacred talismans. Politics incites the same passions as sports and religions. Strangers bond over shared symbols. That’s nothing new.

What’s new and strange and wild is the populist turn, people did not just identify with him but remade him into their image. At rallies or on websites or on stickers at coffee shops, I saw Bernie become like Janus, his new faces sculpted by many hands. He was gay Bernie in Rainbow Pride colors. Or Jedi Bernie welding a lightsaber. Or Captain America Bernie, punching Hitler Trump. Or Run DMC Bernie, who is tougher than leather. Or Hip-Hop Bernie where he is photoshopped into gold necklace dangling scenes. 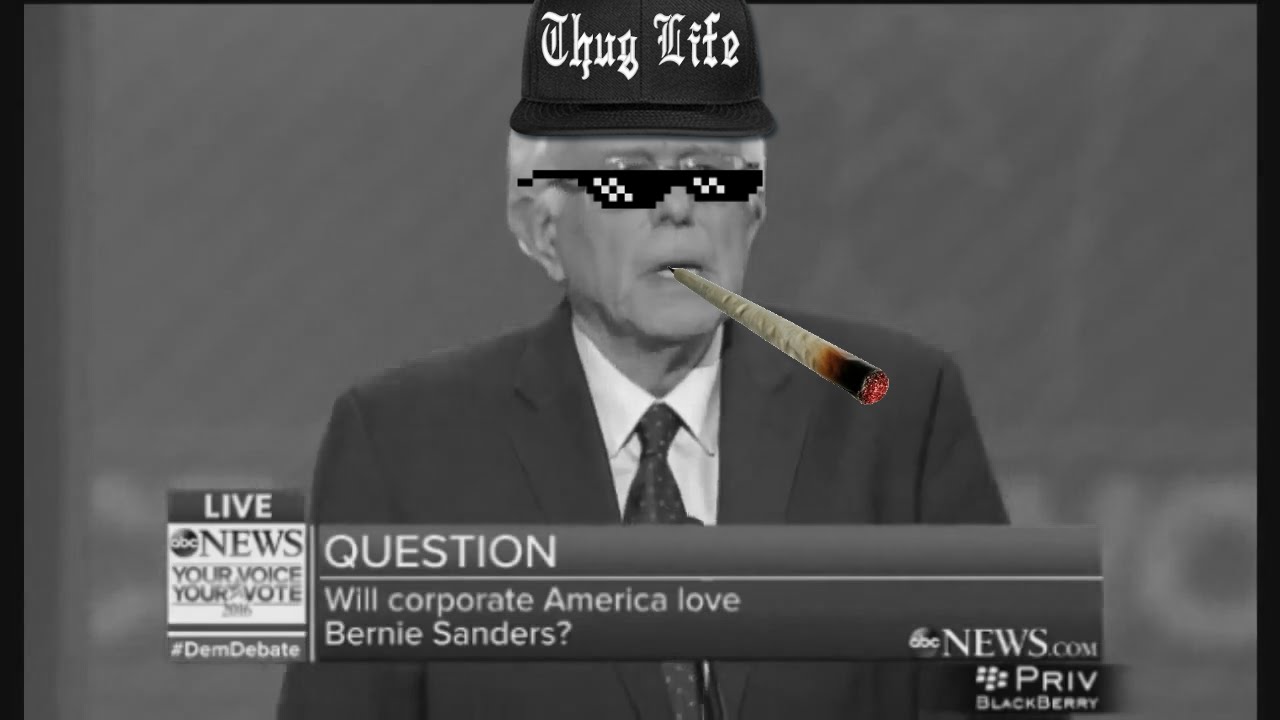 Wherever we lived, however, we lived, we made Bernie into us. It’s a small but important reversal. Instead of power coming from identifying with a “leader”, it came from making the leader look like us. Bernie’s political revolution is authentically democratic. It belongs to our imagination, the very place where new worlds are born.

What we see is so far beyond tepid, liberal incrementalism. When we take control of his image, we learn how to take control of a part of the world that with each victory becomes a bigger and bigger part. If we win, we win against no healthcare, against deep poverty, against climate change, against student debt. We win the survival of our species.

I thought maybe he wouldn’t run. His age is a factor. His politics demand we unlearn cynicism and dream again. And that’s scary.

Maybe it was too late? Candidates have jumped into the race like sharks that smelled blood in the water. Trump was weakened. The Republicans lost the House. As each one announced, you could see the hunger for power in their smiles.

It felt like business as usual. The new gimmick is minority Democrats who mouth New Deal bromides but will tack center if they get the nomination. How do we know? Wall Street loves Booker and Harris and Gillibrand. Wall Street is terrified of Bernie and Elizabeth Warren. I trust my enemies. If they hate Bernie, we can trust him.

Maybe he didn’t want to run? Every time “Hotline Bling” played on the radio, which is too often, it was like Drake channeled Bernie. He was asking why we were “getting nasty for someone else?” I was like, “Bernie, call us, even if it’s late. It can only mean one thing.”

And then I heard from people in the know that he was going to announce. “Word? Really? No. Can’t be. Really?” I got a warm cozy feeling. Like sipping hot chocolate in winter. “Bernie’s back?”

Then a friend sent a link to me. I opened it. “I am going to run for president,” Bernie said on CBS This Morning. No, I thought. We are all running now.

Nicholas Powers is the author of The Ground Below Zero.