The Indypendent
Menu
A Free Paper for Free People
One week after Amazon announced it would not bring its HQ2 to New York, State Senator Jessica Ramos (pictured above) and other critics of the mega-corporation rallied outside the site of a future Amazon warehouse in Woodside, Queens. They demanded that all future workers in the warehouse be allowed to join a union.

But if the governor, mayor and the big developers who backed the deal to give Amazon $3 billion in corporate welfare in exchange for 25,000 promised jobs were looking for someone to point their fingers at, they might have come down to Diversity Plaza in Jackson Heights after Amazon’s announcement. Just after dark, drums and chanting began. Activists held up banners as a children’s mariachi band, followed by Trinidadian tassa drummers, raised a ruckus celebration.

“None of us expected it,” said Anatole Ashraf of PrimedOut NYC, an online group formed to bring Amazon opponents together. “Even when the New York Times reported it, we didn’t believe it.”

Few could. Developer David Lichtenstein, whose Lightstone Group owns a 428-unit apartment complex near the planned HQ2 site in Long Island City, called it “the worst day for New York City since 9/11.” Gov. Andrew Cuomo told the New York Post it was the “greatest tragedy I have seen since I’ve been in politics.” In a statement issued on Feb. 14, he griped that a “small group of politicians put their own narrow political interests above their community.”

As The Indypendent went to press the governor was working furiously to revive the deal. In an open letter published in the New York Times on March 1 elected officials, labor and business leaders, joined Cuomo in pleading for Amazon to return.

Despite catching much of the flack for the original deal’s demise, the Amazon opposition went far beyond the triad of Gianaris, Van Bramer and Johnson. Its numerous antagonists mobilized on-the-ground anger in the community into collective action. They came from a diverse coalition of community groups, union activists, students, tech workers and Queens residents. If city politicians were more receptive to their arguments, it was due in part to the upsurge in left-wing populism that gave the Democrats full control of the state legislature and got socialist Alexandria Ocasio-Cortez elected to Congress from a nearby Queens-Bronx district last year.

Many see the victory against the corporate behemoth as just the beginning.

Ocasio-Cortez opposed the deal from its announcement and used her national platform to lambaste Amazon. However, “many of the elected officials who ended up supporting the fight against Amazon initially signed on to the letter inviting Amazon,” notes Fahd Ahmed, executive director of Desis Rising Up & Moving (DRUM), a South Asian immigrant organization based in Jackson Heights. “But once they felt the pressure of communities, they realized the winds had shifted, and that would not be a tenable position.”

Angeles Solis of Make the Road New York said her organization opposed Amazon’s arrival in Queens even before the corporate welfare package was announced. She cited the company’s “exploitative treatment of workers, their long history of tax evasion, especially in underserved communities [and] their surveillance and data collection, especially on undocumented immigrant communities.”

“We took a no-compromise, no-negotiations position,” said Solis. “This deal would have been a robbery of our communities.”

Rapi Castillo of Progressive HackNight, a group of activist tech workers, said the win against Amazon sent a “good message” to corporations and to tech companies in particular: “You don’t just come into our communities and impose yourself,” he told The Indypendent. “You have to be mindful about what you’re representing, what your technology does. And for us, what Amazon’s technology does is hurting families, hurting immigrants, hurting the community.”

Not that opposition in the community was unanimous. Many local businesses were wildly in favor of the deal, enthused at the prospect of the extra revenue the 25,000 white-collar workers Amazon pledged to hire would bring their way.

The city’s labor unions were divided between those who stood to get jobs from the deal and those trying to organize workers at the notoriously anti-union company. “New Yorkers are the number one reason HQ2 will be built in Queens,” the building-service workers union 32BJ-SEIU said in an evasive, vaguely-worded statement. It had pre-existing agreements with TF Cornerstone and Plaxall, contractors that would have provided services such as security and cleaning at Amazon offices if the deal had gone through. The Building and Construction Trades Council of Greater New York also backed the deal, after it became clear that the project would be built by union labor.

But the Teamsters and the Retail, Wholesale and Department Store Union, which is trying to organize workers at Amazon’s warehouse on Staten Island, were among the loudest opponents. In a meeting the day before Amazon pulled out, company executives refused to agree that it wouldn’t fire union supporters at the warehouse.

Polls showed a 70 percent approval rating for Amazon’s arrival statewide. But at a time when income inequality and gentrification are increasingly on New Yorkers’ minds and the left is resurgent in the city, the $3 billion in corporate welfare brokered in a backroom deal proved too much for many to stomach. Meanwhile, Amazon didn’t have much of a taste for the publicity war that ensued.

“I think we embarrassed them too much with our constant pushback,” Sabrina Rich, who helped form the student-based CUNY Not HQ2 after members of the City University of New York Board of Trustees wrote a letter in support of the Amazon deal, told The Indy.

Many see the victory against the corporate behemoth as just the beginning.

“Momentum for our movement is only going to build,” said David Lee of Queens Democratic Socialists of America. “We are still going to fight for things like universal rent control, making housing a human right, fighting gentrification and displacement, fighting big tech and their collusion with the military industrial complex, and all these fascist agencies of oppression.” 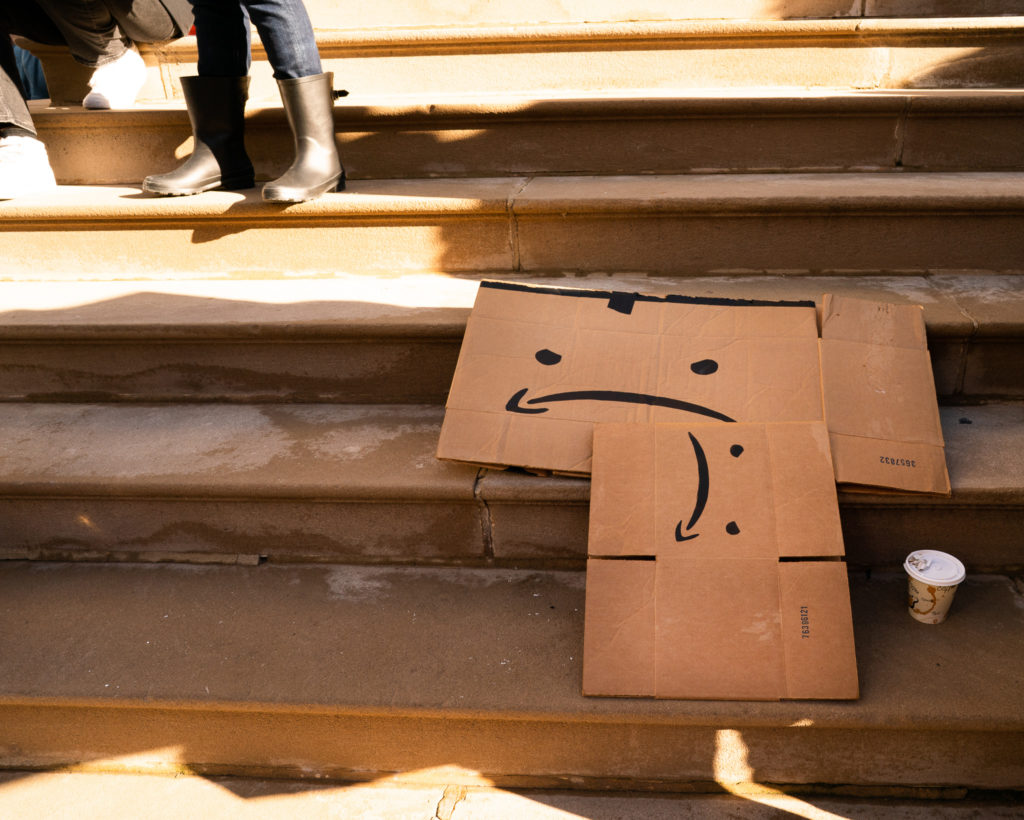 I had Rachel Schragis and Josh Yoder — the artist-design team that turned Amazon’s smile upside down — on the phone the other day when Yoder interrupted our conversation. Something was happening out his window that illustrated a point they were making. A bundle of Amazon Prime-branded wrapping tape was tumbling down the street, blowing in the wind.

Amazon is ubiquitous. Everywhere and nowhere at once. An online entity whose boxes wait grinning on doorsteps the world over to be picked up and carried inside homes.

When Yoder and Schragis first got the idea to stencil an anti-Amazon logo on cardboard boxes, they didn’t know the company was planning on coming to New York. They were working in support of the Primed for Hate campaign, targeting the corporation for selling racist, xenophobic and anti-Jewish merchandise to fans of hate movements.

The two drew inspiration from seeing news reports of striking Amazon workers in Europe who’d carried banners and picket signs with Amazon’s smiley logo turned upside down. “One of our goals was to make the frown more real than the smile,” said Schragis, “so that when you see the smile, you think of the frown.”

They took that anti-Amazon logo and added a pair of eyes, angry slashes that render the frown into a greedy scowl. The two little specks are subtle, but give the impression that something sinister lies behind them, a soulless corporation that abuses its employees, writes code for the surveillance state, peddles bigotry, and puts mom and pop out of business.

Armed with foam rollers, black paint and a pile of cardboard, Yoder, Schragis and a team of volunteers set to work, churning out 200 evil-Amazon logos one night last summer. The emblem made its debut at the Javits Center in July, at a protest outside the company’s annual conference. When Amazon announced plans to build a satellite headquarters in Queens last fall, the logo was featured prominently at opposition rallies in Long Island City.

News reports of Amazon’s internal deliberations suggest that CEO Jeff Bezos and other executives felt threatened by the tarnishing the brand received in Queens. Amazon didn’t anticipate that its grassroots opponents would broaden the public discourse surrounding the company to include its labor practices or its collaboration with Immigration and Customs Enforcement. Because the mock emblem “looks like them, it became a conversation that they couldn’t back away from,” says Yoder. “They can’t undo their own branding.”

“It takes a neighborhood to beat a billionaire,” Schragis added. “I’m sure there are many other people dreaming of how we can use our creative skills to push back against corporate forces in the world. It’s an all-hands-on-deck moment. The win makes so much possible. It’s time that we figure out how to dream from the win.”

Others are seeking to build on the momentum of the grassroots victory to end the kinds of corporate subsidies and tax breaks Amazon was set to receive. Legislation to that effect has been introduced in New York and several other states.

Amazon, which already employs 5,000 people in the city, is still expanding operations here, albeit on a smaller scale. Last year, it purchased the yuppie grocery chain Whole Foods. It also opened a distribution center in Queens, and is slated to open another in Woodside in the near future.

The company’s continued presence means “the degradation of labor standards across the entire city,” said Make the Road’s Solis. “They are just driving down worker protections that we fought for for decades.”

Teaming up with Make the Road and many of the community groups that beat back HQ2, RWDSU is continuing its union drive at Amazon’s distribution centers, including one slated to open at a former watch factory in Woodside.

An earlier version of this article was published on Feb. 18.

Photo (top):  One week after Amazon announced it would not bring its HQ2 to New York, State Senator Jessica Ramos (pictured above) and other critics of the mega-corporation rallied outside the site of a future Amazon warehouse in Woodside, Queens. They demanded that all future workers in the warehouse be allowed to join a union.