The Indypendent
Menu
A Free Paper for Free People
Darryl Herring spent 18 months locked up without seeing the evidence against him. Credit Leonardo March.

It was July 17, 2015, when the cops took Darryl Herring away. It was Dec. 16, 2016 when he was let go. He left Rikers wearing the clothes he’d been picked up in. In shorts and a T-shirt, he ran down to the Legal Aid Society offices for a giveaway coat. He’d just spent 18 months of his life on New York City’s notoriously violent prison island. His trial lasted two days — into court on Friday, released from custody on Monday. Case dismissed.

Chattel slavery was abolished in the United States with the ratification of the 13th Amendment to the Constitution in 1865. But some days Darryl Herring wakes up and can’t leave his apartment in the Soundview housing project in the Bronx, so overwhelming is the fear that he will be disappeared once more.

“Something’s got to change,” he says. “There are too many people sitting up in jail just like me that are innocent. And I’m not saying that what happened to me doesn’t happen to all nationalities, but if you look at the percentage of people in jail, it’s people of color. Slavery is no more, but this is a new form of slavery.”

It’s not like things were coming up roses for Herring at the time of his arrest. He was living in an emergency shelter on Tremont Avenue. But he had more than one set of clothes. He had a few possessions — family photographs, trinkets his late stepmother had left him, and suits for special occasions and job interviews locked away in a storage unit. “When I got out, I had nothing,” he said.

A pair of bills before the New York State legislature would help prevent what happened to Herring and continues to happen to thousands like him. One would repeal the state’s “blindfold law,” which allows prosecutors to withhold evidence until the start of a trial. (New York is one of only four states with such a law.) Another would eliminate pretrial detention for all but the most violent crimes. The governor has provided for similar measures in his budget, which will be hashed out this March in Albany. With both houses of the legislature now in the hands of Democrats, there is little excuse left for stalling these reforms.

As things stand, the legal system creates a near-impossible situation for defendants like Herring to navigate.

First, a judge and prosecutor set bail, often a prohibitively large sum. Herring’s was $75,000. Then it’s off to jail, where defendants can wait months or even years before receiving their day in court and seeing evidence against them — assuming they don’t plead guilty to a lesser charge. Most do, but not Herring. His case illustrates just how far the legal system can stretch a man without ever convicting him.

A woman on the block whom Herring knew accused him of rape. She said that he coerced her into her apartment at knifepoint at five in the morning. The Bronx District Attorney’s office, headed by Robert T. Johnson at the time of Herring’s arrest and by Darcel Clark by the time his case was dismissed, had security camera footage in its possession of the pair calmly walking into the building together. They also knew the accuser was on psychiatric medication, which she was not taking when she made the accusation, and that a medical examination did not support her claim.

Darryl didn’t know what the DA knew. He just knew he was innocent. He was looking at 15 years in prison, but when they offered him a four-year plea deal to an assault charge, he said “no.” When they offered him a year and a half if he pled to rape, he once more declined. By no means a man of means, he went through three different lawyers until he found one he trusted to have the same resolve to take his case to trial as he did from his cell on Rikers Island. He opted for a trial by a judge rather than by jury because “a judge has to instruct the jury in the law, but a judge already knows the law.” 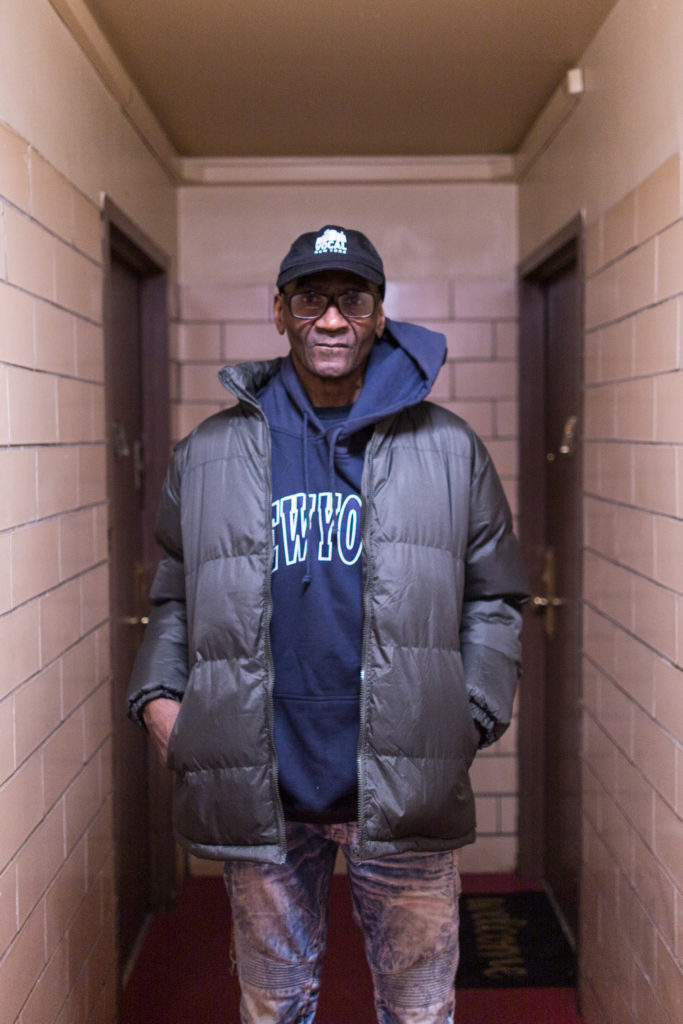 Yes, even someone who is locked up for months on end for a crime he did not commit has faith in the law. Herring’s biggest gripe about Rikers is that younger prisoners would sometimes start fights in order to get out of their mandatory GED classes. They’d instigate a lockdown and older inmates like him wouldn’t be permitted access to the law library.

Yet despite Herring’s faith, the way the legal system now works is not to determine a defendant’s innocence or guilt, but to crack them before a judge or jury can make that determination.

“People have an idea about courts and the legal system being a place where truth is resolved and justice prevails, and that is just not the case,” says Nick Encalada-Malinowski, Civil Rights Campaign director at VOCAL-NY — part of a coalition of dozens of groups pressuring Albany to finally overhaul its cash bail and discovery laws.

Sixty thousand people cycle through Rikers each year, and 200,000 through jails across the state. Some are serving short sentences but, statewide, about 60 percent are trapped in the limbo of pretrial detention. New York State’s pretrial detention rate is the fourth highest in the country. Ninety-five percent of those charged never stand trial. In New York City, just one percent go to trial. To get there can take such remarkable resolve that it strains the notion of the right to due process.

District attorneys love this system. The backlog from the zealous policing of people of color works in their favor. There simply isn’t enough time nor enough judges to deliver on the constitutional promise of a speedy trial. Most of the time defendants either rot away or plead out without DAs breaking a sweat.

The District Attorneys Association of the State of New York opposes both the bill to repeal the “blindfold law” and the measure to reduce pretrial detention. The association did not respond to a request for comment for this article, but its members have been actively campaigning, writing op-eds and meeting with lawmakers to either stave off a vote on the bills or to get them watered down.

‘Slavery is no more, but this is a new form of slavery.’

Many of the reforms’ most vocal critics oversee counties with high pretrial detention rates. But with polls showing legal system reform is deeply popular — in surveys commissioned by the bipartisan advocacy group Fwd.us and conducted by Global Strategy Group, 73 percent of New York State voters supported bail reform and 90 percent backed speedy-trial reform — the DAs have had to tread carefully.

“Let me be clear,” Onondaga County District Attorney William Fitzpatrick wrote in an op-ed for Syracuse.com. “Neither I nor my colleagues in law enforcement across the state are against reform. In fact, we have embraced it.”

Fitzpatrick goes on to insinuate that if cash bail and the blindfold law were eliminated, gang members could intimidate or kill witnesses set to testify against them, battered women would be put at risk, and a pedophile could be allowed to depose his victim “in a sickening interview process or, even better, demand that the court allow him to visit her dwelling.”

Here’s what he fails to mention:

Nor does Fitzpatrick seem to have any of these concerns for victims of wealthy assailants who are able to make bail. Bail is intended to curb the risk of flight, not ensure public safety, but as it stands now, there are two legal systems, one for the rich and one for the rest of us.

“We want to achieve the spirit of the legislative proposals, but we want to make sure it’s done responsibly, not at the expense of victims,” Albany DA David Soares, who was first elected in 2004 on a platform of reforming the state’s harsh Rockefeller drug laws and now heads the District Attorneys Association, told the New York Law Journal. “We want to make sure we do it in a way that will be long-lasting.” Soares wants the reform legislation to include more funding for local DAs, and for them to be allowed 30 to 45 days before forking over evidence.

The current version of the bill would give defendants and their attorneys access to the state’s evidence within 15 days of arraignment. Even that is too long, says VOCAL’s Encalada-Malinowski.

“To us, it is a fundamental idea about how the system should operate that prosecutors should have some burden to produce some evidence at the very first [court] date,” he adds. “Like you can’t just bring somebody in, make an accusation, ruin their life and then say, ‘Sorry, we had the wrong person.’”

Prosecutors commonly have police reports, surveillance video, and witness statements at their fingertips upon arraignment.

Encalada-Malinowski is careful to describe what VOCAL is fighting for as legal system reform rather than criminal justice reform. While VOCAL members are part of a nationwide movement taking on the machinery of mass incarceration, theirs is a comparatively humbler aspiration. With the federal Justice Department tough-on-crime zealots, they have turned their sights to the local level.

In Boston and Philadelphia, grassroots campaigns have led to the election of district attorneys who have pledged to be more responsive to the needs of the communities they serve rather than narrow interests of police and prosecutors. Philadelphia DA Larry Krasner began refusing to seek money bail in most cases shortly after assuming office last year.

Democrats who have long ridden into office using progressive rhetoric no longer have the Republican-controlled state Senate as an excuse for inertia. Will they bow to pressure from DAs, police and correction officers’ unions, or make good on promises of change? Lawmakers must approve the governor’s budget by the end of March. We should have a clearer picture when the deal-making dust clears by then or, at the latest, by the end of the legislative session June 19. Until then, the fate of future Darryl Herrings hangs in the air.