The Indypendent
Menu
A Free Paper for Free People
Illustration by Rob LaQuinta.

“Real change never takes place from the top on down,” intones a voice with a familiar Brooklyn brogue as the music swells and a camera pans a cluster of skyscrapers. “But from the bottom on up.”

It’s the opening scene from the campaign video Bernie Sanders released on the morning of Feb. 19 when he announced he was running again for president. What followed was a fast-moving montage of news clips highlighting Sanders’ outsized influence on the Democratic Party as evidenced by growing support for Medicare For All, free college tuition and a Green New Deal. Cheers then go up from some of the 350,000 Amazon workers who celebrate in their warehouses upon learning that their company had agreed to raise their hourly pay to $15, a cause vociferously championed by Sanders.

In the first 24 hours after he announced his candidacy, Sanders raised almost $6 million from 225,000 donors for an average of, yup, $27 per donation. The total dwarfed the first-day fundraising hauls of his dozen rivals for the Democratic nomination. A week later, he announced that his campaign signed up its one-millionth volunteer and counting.

By the normal metrics of the presidential horse race, Bernie Sanders would be the presumptive frontrunner for the 2020 Democratic presidential nomination. He has near universal name recognition. He has been the most popular politician in America since early 2016, according to multiple polls. He has already run one national campaign. His signature policies have gone from fringe to mainstream in the Democratic Party over the past three years. He can raise gobs of money and has a large, passionate following that will dedicate countless hours to his campaign. No other Democratic presidential contender comes close in these areas.

However, Sanders isn’t your normal presidential candidate and will once again be running against the odds. Age is part of it. He would be 79 on the day of his inauguration and despite his energetic appearance, doubts persist. He faces a large and diverse field in a party hungry for more diverse leadership. Legions of Hillary Clinton supporters still resent him for forcing her to compete for the 2016 nomination. But above all, Sanders is detested by the Democratic Party establishment and its wealthy backers such as the CEO of a giant Wall Street bank who anonymously told Politico in January “It can’t be [Elizabeth] Warren, and it can’t be Sanders.” 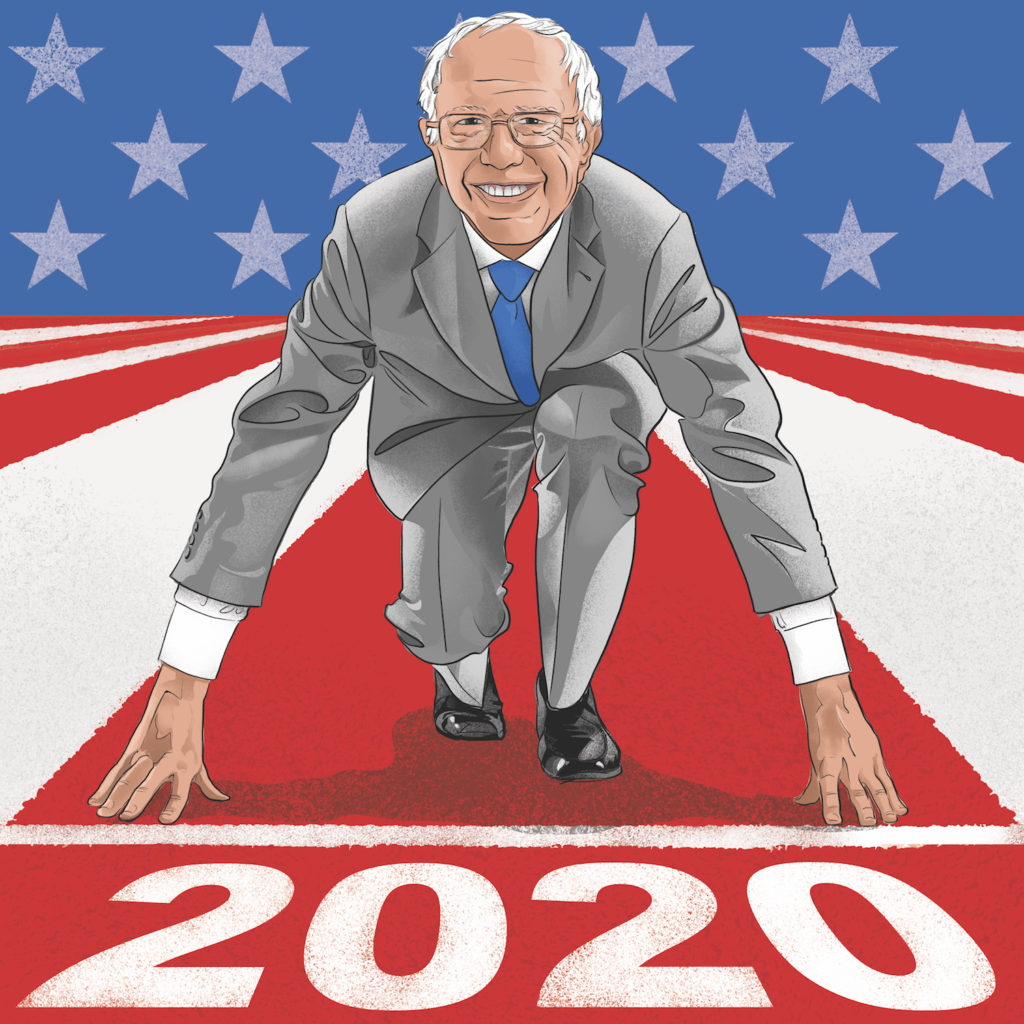 More than trying to win the presidency, Sanders and his movement are trying to wrest control of a major political party and reorient it dramatically to the left. Sanders is not a socialist in the same vein as his early 20th-century hero Eugene Debs who championed the public ownership of industry. However, Sanders does espouse a fierce narrative of class conflict and class struggle (i.e. the political revolution) between ordinary Americans and their “billionaire class” overlords who have rigged the economy and the political system in their favor.

The last political leader to transform a major political party was Ronald Reagan who narrowly lost the Republican presidential nomination in 1976 to incumbent Gerald Ford but captured the hearts and minds of party faithful even in defeat. The Republicans’ 1976 platform that espoused strong support for the Equal Rights Amendment and tip-toed delicately around abortion is like an artifact from a distant age. Four years later, Reagan cemented an alliance of Cold War militarists, free-market tax cutters and religious fundamentalists. This alliance swept him into power and has dominated national politics for much of the past 40 years but is now running on fumes.

Sanders will have a much harder time pulling off a similar transformation of his party given the divide between the Democrats’ grassroots base and party elites. However, those polling numbers that show him to be the most popular politician in the country suggest an intriguing roadmap forward.

A September Gallup poll showed him with a +15 favorable rating. His favorable rating with nonwhites was 64-21 percent compared to 49-46 among whites. There are similar disparities between younger voters who support Sanders and older voters who tend not to. He also does better with non-college educated whites than any other major Democratic Party figure.

These are the ingredients for a multi-racial working-class movement to compel the government to act in the interests of ordinary people if Sanders can turn generic goodwill into votes in a crowded field.

The 2020 presidential race will be an ultra-marathon. We’re looking at 20 more months of fleeting controversies and subsequent social media outrage, email boxes clogged with urgent fundraising appeals, candidate debates that feel more like television game shows and so on. So pace yourself. But while the circus drones on, there’s an opportunity here  — not a guarantee but an opportunity — to build a massive popular movement that can overcome all the obstacles thrown up by Democratic Party elites and transform politics in this country for many years to come.