The Indypendent
Menu
A Free Paper for Free People
Illustration by Rob LaQuinta.

On a clear day, looking out over the sloshing blue-gray swell of Gowanus Bay from Sunset Park’s waterfront, you can see the Manhattan skyline. Pivot slightly and you’ll find eight nearly identical warehouses, erected between Second Avenue and the Gowanus Expressway. Weave through the alleyways between them to sit in sterile parks under the illumination of crisscrossed Christmas lights, or trek inside to drink at a sake brewery or drop $500 on a Charlie Hat from Teressa Foglia. Outside, semi-trucks rumble over potholes, and the awnings of bodegas fade in the sun.

This is Industry City, but it wasn’t always.

In the middle of the 20th century, before the tech start-ups moved in and the blue-collar jobs dwindled out, this site — then known as Bush Terminal — typified a gritty, bygone version of the American Dream. For Yvette Aguirre, whose mother immigrated to Sunset Park in the 1940s, the network of former factories is more personal. It is where her family made a living, producing food with Safeway or sewing sequins onto wedding dresses for Macy’s.

“They worked in factories,” she said, “but they were able to pay their rent and live.”

Aguirre grew up to be the principal of two different neighborhood schools, P.S. 169 and P.S. 24. She also owns a brownstone in the neighborhood, but she fears for her neighbors who aren’t as fortunate.

“They are very specialized businesses,” she said of the companies who rent out office space in the revamped Industry City. “Very few of our people would be able to work there. Also, there’s few jobs. It’s not like a whole factory with 400 people. It’s a job for an office for 10 people.”

A revival of the Brooklyn waterfront’s industrial past, upgraded for the 21st century, is the hope of UPROSE, a community organization that has been active in the neighborhood for decades. It wants to make Industry City a regional hub for Green New Deal-related production. 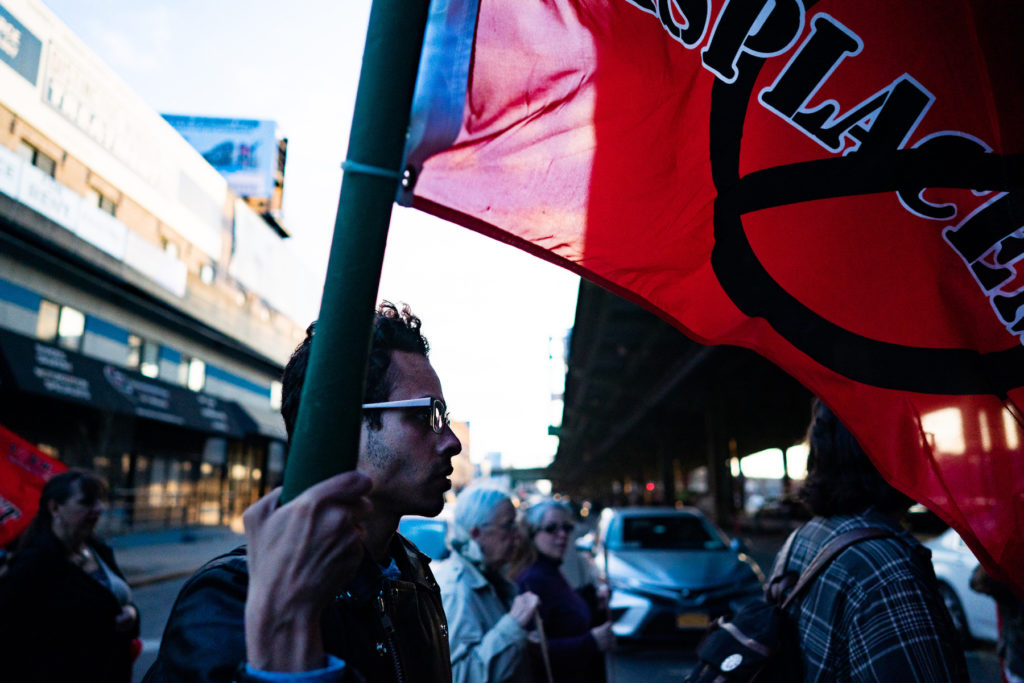 PLANTING A FLAG: Locals opposing plans to double the size of Industry City rally outside a wine tasting at the former manufacturing hub in March. Credit: Erin Sheridan.

The group envisions a future where the industrial waterfront accommodates not only artisanal wine and candle shops, but the assembly of solar panels and wind turbines, which would provide thousands of good-paying green-collar jobs for local residents.

Industry City’s owners — a partnership between Jamestown L.P. and Belvedere Capital — have a different vision. In February, CEO Andrew Kimball filed a long-awaited application to rezone Industry City and add an additional 1.45 million square feet of space to the site. This plan envisions the construction of two new hotels with 420 rooms, a parking lot, classrooms and more retail space — and the death of UPROSE’s nearly decade-long dream of reviving manufacturing on the site.

The application was withdrawn March 11 at the request of Carlos Menchaca, Sunset Park’s City Councilmember, and Community Board 7. In a letter to Kimball, they argued that the Uniform Land Use Review Procedure, a public process to review land-use changes, did not allow enough time to study the potential effects on displacement and gentrification. They would not support any rezoning, the letter warned, until they can finish independently evaluating those effects.

“The Councilmember’s office is also continuing to analyze citywide trends in order to situate the changes Sunset Park has experienced over the last decade in a larger context,” a spokesperson for Menchaca told The Indypendent in an emailed statement. “The plan is for all these groups to present their findings to the community board and allow the public to weigh in this summer.”

On March 15, UPROSE took its campaign to the streets. Members marched to the Sunset Park waterfront, rallying opposition to the rezoning while vowing to disrupt a wine-tasting event slated to take place at Industry City at the same time.

Young and old raised banners. “Sunset Park No Se Vende,” their synchronized voices rang. Sunset Park is not for sale. They passed blocks of auto shops and public schools as they crossed into Industry City, where their chants resonated amongst outlet stores and food purveyors and the stares of onlookers.

Sharline Dominguez, a 25-year-old paralegal assistant with the New York Legal Assistance Group, was on her way to the gym when she bumped into the protest.

“This is amazing,” she said. “This is the first time I’ve ever seen anything like this in this community.”

Dominguez and her family immigrated to Sunset Park from the Dominican Republic in the 1990s, when she was a little girl. They were pushed out south to Bensonhurst by swelling housing costs and then across the Hudson to New Jersey.

“It almost hurts a lot,” she said of the changing neighborhood. “I think that Industry City is a great space. It’s bringing revenue into the neighborhood. It’s employing different kinds of people. It’s diversifying the economy here. But, at what cost?” 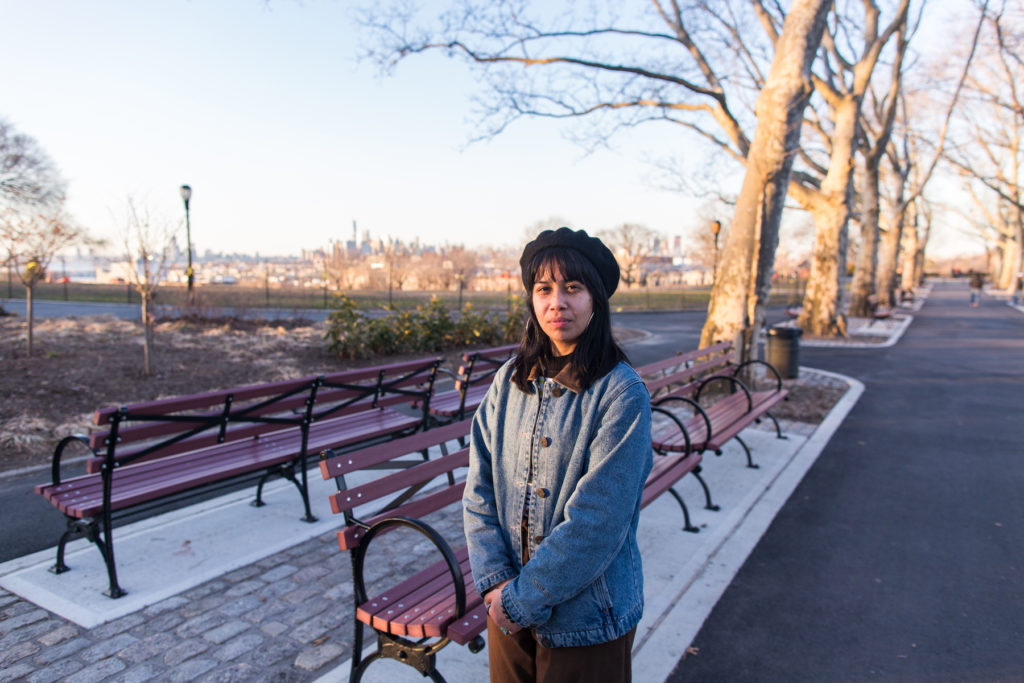 UPROOTED: Sharlene Dominguez was forced to leave Sunset Park where she was born and raised when rising rents made it unaffordable. She is not alone. Credit: Leonardo March.

For UPROSE executive director Elizabeth Yeampierre, the cost is in lost opportunities.

“We would like to see some environmental amenities and some efforts to address the climate needs of our region and our community,” she told The Indypendent. “We’re living in the age of climate change. Development can’t look like what it’s looked like for our entire lives.”

Investing in sustainable energy and carbon-neutral infrastructure now can pave a smoother transition to a greener tomorrow. But, if climate action on the scale of a Green New Deal is delayed, locals fear that Sunset Park will be battered again by surging storm waters, as it was six years ago during Hurricane Sandy.

“It’s really sad to look at New York City and to think that there aren’t hubs for working-class people to work and build for this climate future,” Yeampierre said. “If there’s a million and a half square feet, I think there is something that can be done with that.”

The organization has hired the Collective for Community, Culture, and Environment — a consulting firm of Pratt Institute researchers — to explore how Industry City could be repurposed for a sustainable and environmentally just future. Its findings will be made public, Yeampierre said.

She believes the fight for a greener future is also a battle to thwart the kind of gentrification that has steamrolled so many other New York City neighborhoods.

“We’re constantly, as social justice activists, being pulled in so many directions,” Yeampierre said, “because of the same kind of development and the same kind of oppression that these people have been imposing on our communities everywhere and for so long.”

Industry City’s owners argue that its version of restoring the industrial waterfront works to the benefit of the neighborhood. “Since 2013, Industry City has generated tremendous economic benefits for people who live and work in Sunset Park and throughout Brooklyn — including spending approximately $100 million at area businesses, quadrupling the number of on-site jobs from 1,900 to more than 7,500, and growing the number of businesses from 150 to more than 500,” spokesperson Lisa Serbaniewicz said in a statement. “We look forward to working with Councilmember Carlos Menchaca, Community Board 7, our community partners, and area residents — many of whom support the effort to reactivate Industry City — as the effort to generate opportunity continues.”

Others remain skeptical. Tom Angotti, a professor emeritus of urban policy and planning at Hunter College and the author of Zoned Out! Race, Displacement, and City Planning in New York City, doubts Industry City’s claims that locals will not be harmed by the site’s rezoning.

“The history is once property values go up, it’s a snowball effect,” he told The Indypendent. Landlords will inevitably want to rent to more affluent newcomers, he explains, so “people who are living in lower-cost housing are going to be forced out.”

For New York’s industrial waterfronts, the rumblings that would later erupt into a Pompeii-esque explosion of gentrification were first felt in the 1960s, when the Port of New York decided to move to New Jersey. That left the old areas of docks, warehouses and factories in a state of decay until it became profitable to scoop them up and shine them off for residential and commercial development.

“That began the whole transformation of the waterfront from industrial manufacturing and working-class housing to high-rise luxury housing,” said Angotti, “which is what you see now in Williamsburg and Greenpoint, in Dumbo and Sunset Park.” 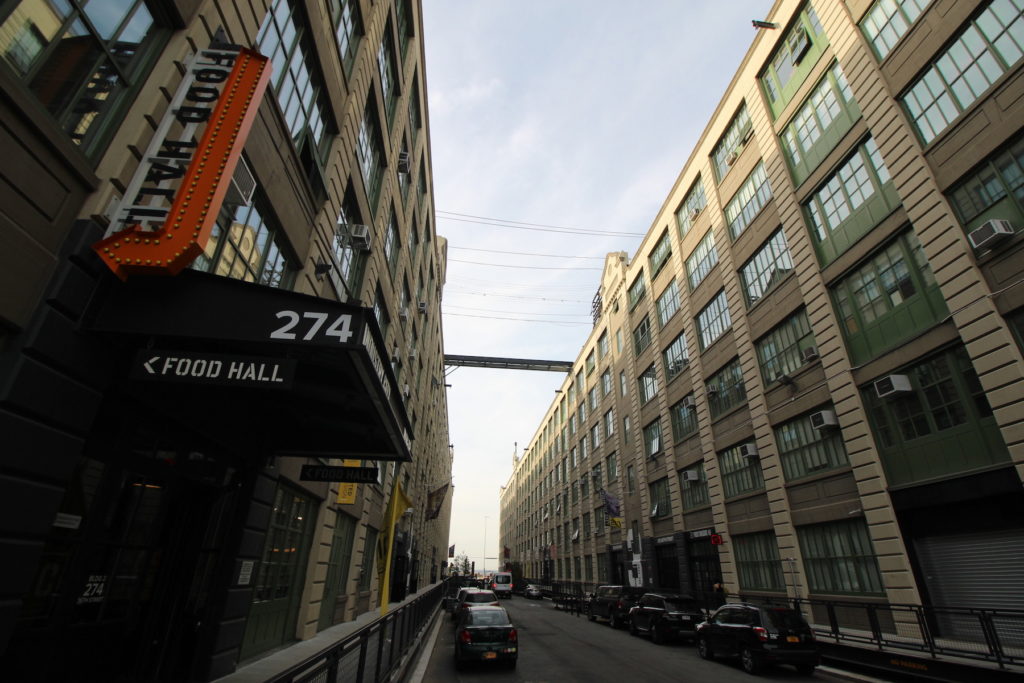 According to Angotti, the fate of UPROSE’s green vision depends on two factors: the economy and politics. With many experts predicting a recession in the near future, there may be less investment capital to funnel into billion-dollar development projects like the one Industry City executives hope for. Additionally, as the Democratic Party moves to the left, and as Mayor Bill de Blasio and Governor Andrew Cuomo reel from the loss of the Amazon headquarters in Long Island City, supporters of rezoning may be less willing to lay their cards on the table.

That frustrates activists like Yeampierre. “Here comes Jamestown,” she said, “taking one of the last remaining opportunities in New York City to build for a climate future and swallowing it up so that it can serve the needs of some really privileged people.”

Maybe the threats of climate change will be enough to propel a successful campaign against the developers behind Industry City. Maybe things like Sunset Park’s charming housing and crisp views of Manhattan and Lady Liberty will ultimately make locals dig their heels into the ground.

Or, as Yvette Aguirre says, maybe it is simply that, “people here want to live here.”