Call me crazy, but I’m optimistic.

I mean it. Sure, it’s rough sailing out there. But think about it: Bernie 2020, the Green New Deal… marijuana might even be legal one of these days. Plus, now we can say the word “socialism” on basic cable.

Then there’s our newspaper. It’s survived — dangling on a shoestring by the skin of its teeth — for going on 20 years, a voice of sanity and of community in our seriously fucked-up, alienating times. We’re reaching more people than ever these days with our bright red newsboxes on street corners across the city.

We’ve been labeled a radical publication by people who think war and planet death normal as night and day. I guess there are just some things we haven’t learned to accustom ourselves to.

All of which is to say, dear reader, let’s celebrate our radical nature, our radical refusal to accept the world as is and our continuing struggle for a better one. Spring is here. The birds are screaming in the trees. Let’s have a ball.

We hope you’ll join us this Saturday at the Sixth Street Community Center for The Indypendent’s first ever Radical Spring Ball. There will be live music — from Cajun-inspired punky and western to good old funk — a live DJ, and beer and wine that, unlike rents these days, is actually affordable. Arrive at 7 p.m. for a special art show and silent auction, featuring limited edition prints and original works from The Indy’s illustrators. The music starts at 9 p.m.

What other newspaper runs headlines like “Take Down the Landlords” or puts a doobie in the Statue of Liberty’s mouth? A $10, or, if you’re feeling really radical, $20 donation gets you in the door and every dollar you spend from then on out goes toward making The Indy possible.

Who says being a radical has to be all about wearing buttons and dietary restrictions? How did Emma Goldman put it? “If I can’t dance I don’t want to be in your revolution.” Let’s dance together. 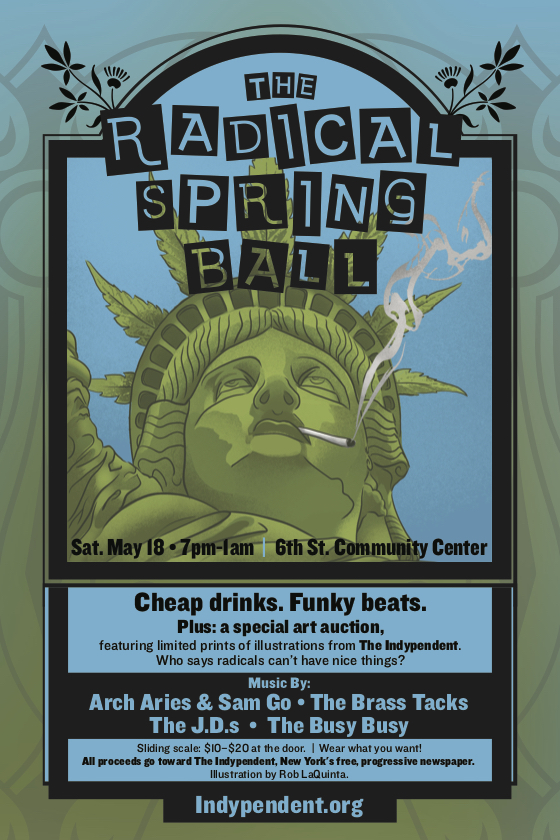