The Indypendent
Menu
A Free Paper for Free People
Members of the Reclaim Pride Coalition rally in the West Village across from the Stonewall Inn. Credit: Loni Fredryx.

Frustrated that the annual New York City Gay Pride parade has become dominated by corporate floats, a group called the Reclaim Pride Coalition announced in May that it will mark the 50th anniversary of the Stonewall riots with a separate march. Reclaim Pride’s Queer Liberation March will begin 2.5 hours before the official parade on June 30, and will not allow either corporate or police contingents.

“The use of the word ‘parade’ signals a celebration,” said Reclaim Pride member Leslie Cagan, a longtime activist who organized some of the biggest protests in the city’s recent history, against the Iraq War and the climate crisis. “We are calling this a march because while we certainly have things to celebrate… there is a lot more fight to be had.”

The organization’s biggest complaint is that the official parade has become more like a corporate party and less about politics, community solidarity and liberation. Last year’s parade had more than 150 corporate floats, and this year’s corporate sponsors include T-Mobile, Mastercard, TD Bank, Delta Airlines, Target, HSBC, Skyy vodka and the OmnicomGroup corporate-marketing agency. Last year, Heritage of Pride, the official parade organizers, instituted a policy that limited community contingents to 200 marchers, while corporate sponsors were allowed up to 800.

‘There is a lot more fight to be had.’

Tensions have escalated since the Trump administration came into office. In 2017, a number of community groups organized a Resistance contingent to protest the administration’s anti-LGBTQ+ policy changes. But last year, Heritage of Pride tried to ban them from participating in the parade, Cagan says. The Resistance contingent was eventually allowed to march, but at the back of the parade, behind all of the corporate floats, starting five hours after it kicked off and after all of the live broadcasting was over.

“We bring what we think is a more comprehensive view, not only about the queer struggle but how we are part of it and in relation to other struggles,” Cagan says. “The queer movement doesn’t even talk about liberation anymore, let alone positioning itself as part of many communities.” Reclaim Pride met with Heritage of Pride several times earlier this year to encourage it to incorporate some of these concerns in the parade, she adds, “and they said no.”

“The reason the New York City Pride march matters is because Stonewall happened here,” says Reclaim Pride member William Dobbs, a veteran gay-rights activist who worked with Cagan organizing demonstrations in the 2000s and was a member of the Occupy Wall Street press team in 2011. The 1969 Stonewall riots, which began when police raided a gay bar in Greenwich Village and patrons resisted arrest, were not the first time LGBTQ+ people resisted or protested, but catalyzed a larger, sustained movement. “Without the organizing that Stonewall sparked, this event would have been a footnote in history,” Dobbs says.

That, he explains, means that the Pride march should be about supporting justice and human rights, not banks and fast-food chains. “How are you going to get economic justice when you are dancing with Fortune 500 companies?” Dobbs asks.

Another of Reclaim Pride’s concerns is the police presence in the official parade. Last year, Heritage of Pride incorporated a police contingent, which saw a large number of officers acting as official marchers. “Not just out and gay officers, but an official police contingent, with officers in full uniform and with weapons,” Cagan says.

That, Reclaim Pride believes, is incongruent with the parade’s original mission, which, after all, commemorates LGBTQ+ resistance to police brutality. No one knows who at Stonewall threw the first bottle or was the first one to kick back, but many in the bar and the crowd were transgender women, drag queens and more subtly gender-nonconforming “scare queens” and “flame queens.” Among them were Marsha P. Johnson and Sylvia Rivera, transgender women of color who emerged as leaders as the gay-liberation movement grew. Those issues haven’t gone away: A 2015 survey of more than 27,000 trans people by the National Center for Transgender Equality found that 58 percent of those who reported having an interaction with police in the previous year said they’d been mistreated, from being repeatedly referred to by the wrong gender to being forced to engage in sexual activity to avoid arrest.

The parade was never just about pride, says Scott, but is about political action. The “corporatization of Pride has gotten in the way of that mission.” By holding the Queer Liberation March, she adds, Reclaim Pride is attempting to revive the community spirit of the first Gay Pride parade in 1970 and to put the politics back into the event.

“Most of us would say victories like the right to be in the army, or the right to marriage — those are not the kind of victories we are talking about,” says Cagan. “We would like a more comprehensive and thorough analysis of the institutions that oppress people.”

On June 30 at 9:30 a.m., the Reclaim Pride marchers will attempt to reignite that revolutionary spirit and desire for change, not just inclusion, by taking the same route as the 1970 march, then called the Christopher Street Liberation Day March — beginning on Christopher Street near the Stonewall Inn, and going up Sixth Avenue to Central Park.

“It’s about structural change, instead of just a seat at the table,” says Dobbs. “I hope the march sends a message about justice, about something that’s as big as the sky: liberation.” 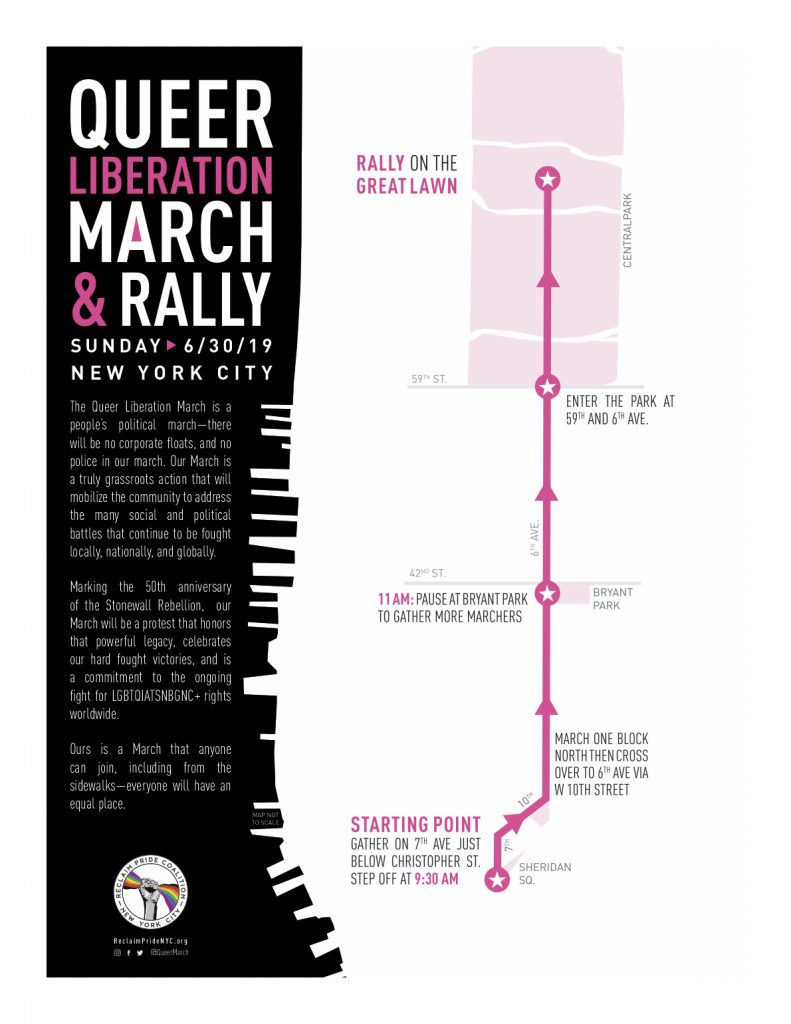 Photo (top): Members of the Reclaim Pride Coalition rally in the West Village across from the Stonewall Inn. Credit: Loni Fredryx.